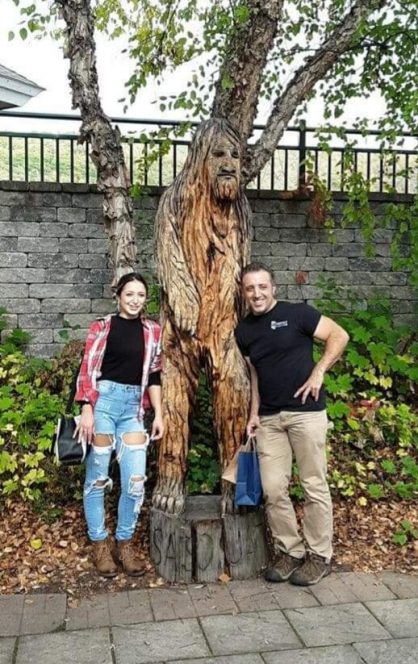 Saturday, Sept. 28, my father and I attended the annual Sasquatch Calling Festival in Whitehall, New York. As huge believers of the beautiful things that our world (and every other world) has deemed “crazy” or “impossible”, we never miss out on a chance to gather with people of our kind to celebrate the utmost taboos.

This event took place roughly four hours from where we live, and ironically, a hairline outside of one place we love to spend our free time. Whether we’re snowmobiling in Speculator or hiking one of the 46 points, the Adirondacks is another home to us. We spent the weekend hanging out around our property in Indian Lake, doing some work to prepare for the building of our cabin. We hiked around a bit hoping to see some unusual beings roaming the forest with us.

Just to provide a visual, the Adirondacks are 18,702 square miles of mountains, lakes, land, and trails. That’s roughly 12 million acres. The forests are so large and so deep that you could get lost inside for eternity if you don’t know exactly what you’re doing. Every single national park in the United States of America put together can fit inside of the Adirondacks comfortably. Whitehall is one of the small towns right outside of it. Home to the most beautiful, picturesque scenery in the autumn months, in upstate New York, it’s a peaceful, clean breath of fresh air; literally.

There are occasional breaks in the silence, though, and the Sasquatch are to blame.

During our visit to the festival, we were fortunate enough to sit and talk to Brian Gosselin, a Whitehall native and one of the several famous Bigfoot eyewitnesses. He talked about many odd experiences that he’d had over time, but the one that changed his life forever took place on the night of Aug. 25, 1976.

He told us the story in-depth, but I’ll give a summary and hopefully do it some justice.

Aug. 25, 1976 was the night that Brian saw an eight-foot-tall, hair-covered creature roughly 30 feet in front of him on Abair Road. His brother, Paul had been out fishing with his friends the night before, and they heard what sounded like a woman’s blood-curdling screams coming from the woods. They called out in the darkness hoping to get a response, but they got nothing besides a face-to-face encounter with this massive creature that sent them barreling home for help.

Paul got his father and some police officers to come back to the location to check it out. Brian, who was also a cop, didn’t go with them because he was on duty in a different place that night. When the group arrived back to the scene, it took them a little while, but they did, in fact, encounter the same frightening creature that the boys had reported seeing a little while earlier.

After hearing his father’s testimony, Brian believed that there was really something going on, and that’s what made him go check it out the following night.

A few weeks went by, and Brian finally built up the courage to go back to the infamous spot on Abair Road. He didn’t want to go alone, so his nephew tagged along. They went on a hike to see if they would come across any clues. Sure enough, they were scared again when they discovered a massive footprint in a matted down clearing, proving that what everyone had seen those nights couldn’t have been a figment of their imagination.

Brian and his family are well-known around Whitehall, the Adirondacks, and amongst other eyewitnesses and enthusiasts in the Bigfoot-loving community. Since that night in 1976, Brian has diligently studied and hunted Sasquatch, bringing eyewitnesses together to figure out everything there is to know about them.

In April of this year, he and his team were out doing research and came across a massive footprint just about the same size as the one he had found in 1976. They took a plaster mold of it and studied it inside and out. At the festival, he had it out in a glass case to display to the passersby. The impression that I saw, in that case, was no human footprint. Brian told us that based on the size of the footprint and the way it was pressed into the ground, the creature that created it would likely be about 700 lbs.

It’s safe to say that our trip to the Sasquatch Calling Festival was a success. We heard some great Sasquatch calls, networked with Brian Gosselin, and learned even more amazing things about these incredible creatures.

I don’t really have many words. I believe that nothing is impossible and that there is so much more out there than we could ever even comprehend. I can only imagine what roams the acres of woods in upstate New York alone, much less the rest of the world.

I look forward to maybe having some encounters of our own while we’re up at our cozy cabin in the middle of the Adirondack forest.