Brianna of all Trades 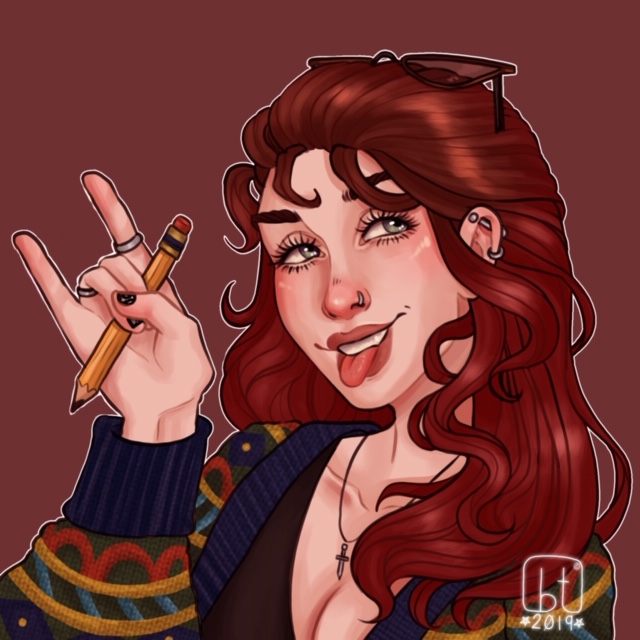 With the mane of a lion and a heart of pure gold, Brianna Townsend is a beautiful person, inside and out.

Who is Brianna Townsend, you ask?

Well, she happens to be a good friend of mine, and I had the pleasure of sitting down to interview her recently. She’s such a unique soul, and although I haven’t known her for an extremely long time, Brianna has brought an abundance of positive energy and laughter into my life since she entered it. She has always stood out to me because her many talents and accomplishments exist in equal measure to her humility. I don’t think she realizes how particularly special she really is.

Besides her family’s five cats, two dogs, and one lizard, Brianna is an only child. She lives with her eclectic, hippie parents, whom she loves more than anything. They’ve supported her and her hobbies since day one.

This girl practically walked out of the womb with a sketchbook in one hand and a pencil in the other, but she’s been formally creating art since she was around 10-years-old. Her work is tremendous. She can draw just about anything, both traditionally and digitally. She enjoys turning her drawings into tattoos for herself and for others.

Brianna also loves to get her hands dirty. She currently studies a handful (literally) of different trades (carpentry, welding, electric, HVAC, plumbing, etc.) to expand her knowledge and skills. It’s inspiring to see a young woman exploring a path that we don’t often see women go down.

“It’s always fun starting the class and knowing that they don’t even have to do attendance because your name is the only female name on there.”

Another awesome talent of hers is tending bar. Not only is she a fantastic mixologist, but she enjoys it as another form of art and it pays her bills for the time being. She also makes me my very favorite drink in all the world, The Van Gogh (a pomegranate Mojito with a splash of Absinthe; heavenly) better than anyone else and whenever I ask for it. Thank you, sis!

Brianna loves tattoos. She grew up around people who had and supported them and even had her first one picked out since she was a little girl. She has about 10 now, most of which she drew herself, and she has plans of getting tons more.

She has such a deep-rooted love for skulls of all kinds, and the reason behind the obsession is one of her favorite stories to tell. Her grandfather was always a huge influence in her life, but he was never the best gift-giver. When she was three-years-old, he gave her the best gift she’d ever received: a skull that had roses coming out of the top of its head. With the press of a button, the roses would dance to a rock ‘n’ roll version of the funeral march. Every birthday and holiday since that day, her grandfather gifted her some sort of skeleton or skull. She thinks skulls (especially dinosaur skulls, cause they’re her favorite creatures) are the coolest thing since sliced bread, and I mean, who can blame her? Although, she’s pretty fond of bread too.

Brianna only has a couple of skull tattoos currently, but there’s a big project in the works. She’s planning out a full sleeve composed of skulls from all different humans and animals, alive and extinct, with some flowers to fill the spaces in between.

After she’s finished with trade school, she would like to start learning to tattoo. She hopes to spend time as an apprentice; shadowing some professional tattoo artists before diving into it herself.

10 years from now, Brianna envisions a tattoo shop of her own where her time will be spent tattooing masterpieces on other tattoo lovers like herself (such as me). On the side, she would like to put to good use her handy(wo)man skills, by handmaking furniture and selling it. She definitely doesn’t mind the idea of getting married and having children, but it isn’t her top priority. She feels that those kinds of things shouldn’t be planned; if it happens, it happens! However, her house will always be full of pets.

Brianna has performed many thoughtful and kind acts in her time, as she is a selfless individual. There is one exceptionally honorable thing, though, that not many people know about her, and I think it’s important to share.

On July 14, 17-year-old Instagrammer and artist, Bianca Devins was murdered in Utica, New York by a guy she’d met online and attended a concert with that night. Her killer took a gruesome photograph of her slain body and posted it publicly along with a twisted caption. The terrible photo went viral, and people were filling her social media tags with awful things, including the morbid photo. A movement was started to clear her tags of the obscenities. Brianna was one of the few people to sit down for countless hours sorting through and reporting the posts. She later decided to draw a beautiful picture of Bianca to replace all of the bad ones that had flooded the internet, in hopes of spreading love, and assuring Bianca’s family that she would be remembered in a positive light. The drawing went viral, exactly how Brianna had hoped. The family of the girl even reached out to let Brianna know how much they appreciated what she’d done for their Bianca, and BBC News contacted her for an interview after seeing her drawing. Brianna is so happy that she was able to touch so many people with her art.

She is one of a kind. What she did was incredible.

I am beyond lucky to have a friend like her who is down to feast with me at any hour of the day or night. She’s happy, optimistic, and truly genuine; an absolute inspiration. With dedication like hers, she will soar to the highest heights. Her parents, Cheryl and Brian, did a fantastic job.