A Reason, a Season, or a Lifetime 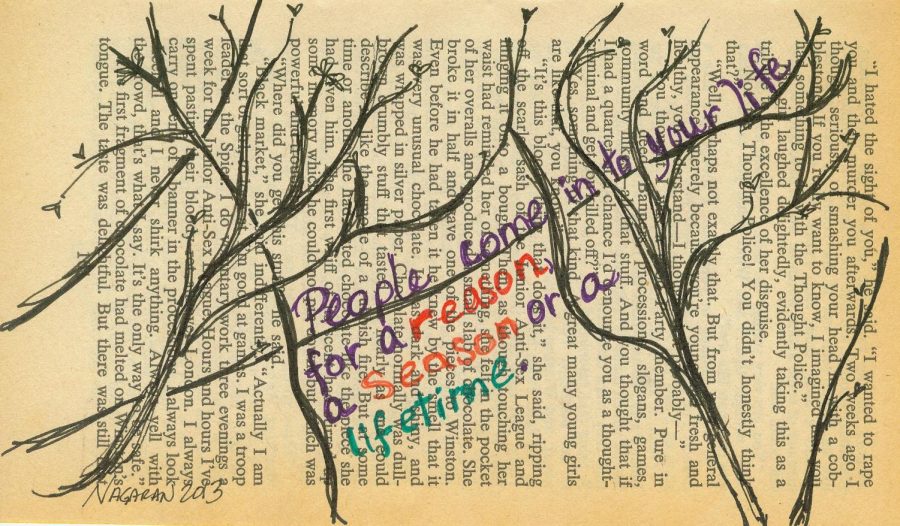 My mind has a tendency of scrambling all of my crazy thoughts to incomprehensible heights, so I figured I would try to separate and organize my latest focus: friends.

My mother always told me that good friends were an “extra” in life; that if I was lucky, I’d have one really true friendship that would stand out from all the others and last a lifetime.

Recently, I was talking to someone who told me to remember that not everyone who is nice to me is my friend. This is what inspired the gears to start turning.

Growing up, it seemed appealing to be involved with a large group of people. Looking back, I can see just why that was immature to want. If I were to make a list of the people that I once considered to be friends up to this point in my life, I could probably think of a thousand names. If I had to circle the ones that stuck with me through thick and thin, never betrayed me, proved their loyalty, were honest, loving, caring, brought out the best in me, etc., I would probably only be able to circle a few. Quality over quantity.

So, this idea is definitely a valid one because it’s true: not everyone is a friend. Going to work or school and meeting people who seem nice and relatable is exactly that. Some people are going to be nice; they’re going to be great to bond with over common subjects, but at the end of the day, not everyone can hold the title “friend.”

It’s very easy to fall victim to thinking that you have more friends than you do. Most of us are guilty of it. But when you sit down and really think about it, you’ll see the difference. The title “friend” is something that should be earned. By the same token, it’s also a good idea to give your whole true self to a small number of people as opposed to giving just a version of yourself to many.

Trusting, spilling your guts, and becoming attached quickly to someone who hasn’t really been anything other than an unbiased good listener can be really easy to do. But I’ve noticed that I’ve sometimes skipped the important step that involves determining whether or not there’s enough of a connection there to consider someone a friend.

I often find that people will refer to several others as their “best friend,” and I always laugh because I think it sounds childish that ‘everybody is their best friend.’ It’s more likely that they have a handful of friends and acquaintances and that one or two of them are good friends whom might even be referred to as “best” friends. They just don’t realize that that’s the case. But even still, it’s common to mistake acquaintances, coworkers, classmates, or people who provide a surface area level of attention, etc. for friends. Not to say that these people can’t become friends, but often times they actually aren’t. On top of that, I would assume the title loses its luster when overused, making people who are actually true friends feel that they aren’t any more special than anyone else.

In my life so far, I’ve had many friends, I’ve belonged to a handful of groups, and I’ve even traveled and lived under one roof with some people that I assumed would be around forever. I see now that a lot of these people were just passersby in my life; stepping stones leading me to each destination. While some were meant only to lead me from one chapter to the next, others were meant to journey with me to the end. As I grow older, I understand and appreciate the reason behind each of their roles in my life, and I no longer throw the word “friend” around carelessly.

I believe in soulmates, but I don’t believe that we each only have one. There is definitely one romantic soulmate that we spend our lives trying to find, but amongst that one, there are several other mates that I truly feel our souls have connections with, way deeper than just the current life we’re living in along with them. That’s how I make sense of the attachment I feel toward the extra important people in my life. The very first time I met some of them, I knew immediately that their soul was already connected to mine; like I recognized them. Sometimes, these ones just stick: no distance or time could possibly lessen the connection. I have actually gone through dating someone for a handful of years and come out of the relationship realizing I may have only been with them in order to align with someone I wouldn’t have met without dating them, who was meant to be a lifelong friend, i.e. one of my soulmates. That has just further proved my belief that everyone really is put into our lives for a reason.

My mother was right though, there aren’t many of them, but I’ve noticed that there are sometimes a handful over the course of a lifetime that are designated to different chapters.

I met my first friend, B, when I was five years old, and for 20 years she was my very best friend. It was one of those things that didn’t require any time. We knew right away. Our friendship survived my family and I moving away when I was young, her going away to college for a long time, and it defeated every other obstacle in between. She’s one that I recognized for sure. She was different. We shared the same values, we shared the same morals, we simply had an understanding between each other, and we would’ve taken a bullet for one another if it came down to it. Our families were very close too. As years passed and I learned about soulmates and such, I connected the two. I realized that our souls had clearly connected in one or more other lives, which is why our bond was so strong. I never took our friendship for granted, even though I firmly believed it would last a lifetime.

Rather recently, after something odd took place in my life, she actually walked away from me. Just like that. No explanation, no closure, no nothing.

It seemed as though 20 years of friendship meant absolutely nothing. But then I sat and thought about it, and I realized that maybe she just wasn’t meant to be a part of my journey forever whether I like it or not. Maybe those 20 years did actually mean the same to her that they did to me. Perhaps they served their purpose and aided in getting me to where I am today. It seems understandable, seeing as how I have actually learned a lot about myself and about life over the past few years. Maybe my necessary lessons were learned and that chapter just needed to come to a close. I suppose her job in my life was to teach me whatever it was that I needed to learn and then get on her way.

The way it ended shouldn’t diminish its significance. And so instead of me feeling bitter toward it or wondering if I was right for calling her my best friend, I’m trying to be more thankful. We are all assigned plans before we’re sent here, and I agreed to mine. The memories aren’t going anywhere, and I may not have been able to grow the way I needed to if she hadn’t walked away when she did. I assume maybe her journey required this change as well. Either way, I’ll always feel the same about it. If everyone could know a friendship like the one we shared, even just for a little while, I’d consider them very lucky.

In sixth grade, I clicked with K, a girl from my English class. We were attached at the hip for a while, and made it through some pretty rough years together. Life eventually came in and we silently parted ways. I remember noticing that we were growing in different directions, but being friends with her actually halted other friendships of mine with people that ended up going in directions I wouldn’t want to be associated with anyway. We didn’t have a soul connection, and I haven’t spoken to her since I was probably 17, but it was great while it lasted and I’m glad we bonded over “Twilight” while others were making not-so-wonderful choices.

At 16, I became friends with N. She was two years younger than me, and we couldn’t be more different if we tried. We knew of each other through her older brother, and I was friends with some of her neighbors. Our friendship started at a mutual friend’s birthday party where we spent the afternoon in the pool and slept over afterward. While all the other girls were asleep, the two of us sat on the bathroom floor laughing hysterically with each other until the sun came up. That’s when we knew we were going to be great friends. She’s moved away a million different times since, but we’re still just as close as we were that night on the bathroom floor, and yes, still always laughing. Because of how different we are, I’m certain that our connection runs soul-deep.

Roughly six years ago, I started working for Hilton. That’s when I met A. She was about three years older than me and had just gotten engaged. Although she was my manager, we became inseparable. She was optimistic, encouraging, genuine, loyal, and truly loving. Our friendship has seen us through some incredibly huge life events, and I’ve been able to count on her to always have my best interest at heart through thick and thin. She’s family to me; her friendship is irreplaceable. She is undeniably my soul sister and she always will be.

In between all of my very best friendships, there are also fond memories to be had of other people that came through to fill the spaces. Some were classmates that I’d see once a week, some were coworkers that made my shifts bearable, some were simply just friends to me.

People never walk into our lives by accident. Some will come for a reason, some for only a season, and some, for a lifetime.