The Field of Open Doors 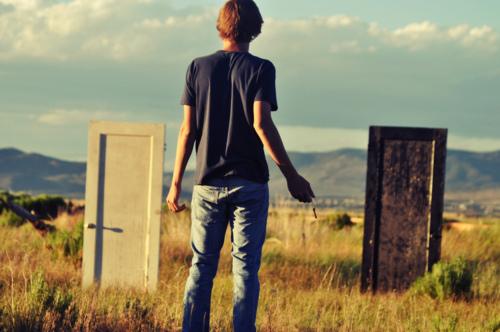 “It feels like long times since our last go round on the boat. A conversation about sexual partners isn’t an in depth convo. At least to me it isn’t. It’s topical to say the least, but it served its purpose well. It brought us to this moment. You see everything is said for a reason. At least that’s the way I see it. Have you ever thought that people, who are good, are really being good just to be good? It’s a habit. The same way I smoke cigarettes is the same way they’re good. It might seem like a bit of stretch, but is it really? It’s been days, possibly weeks since the boat docked. “- Joe

This place is very cryptic; it’s not what I see that’s important it’s what you see that matters, and the moment you see something you’ll know why this is Parts Unknown.

We finally made it to “The Field of Open Doors.”

This is one of the most dangerous places I could ever bring you. This place has the same landscape for everyone but what is seen is very different.

Each door shows something different.

This place is different from “The Land of Memories.”

Behind these doors lies our most negative.

This isn’t the “Seven Monster’s within “. We aren’t ready for that, at least not at the moment.

Hundreds of doors fill this gray field. It’s foggy with that dry yellow grass under your feet. Each time you step that crunchy brushing gets louder and louder until it annoys you. The sound is recognizable, familiar even, as if it were related to a broom being swept on the floor.

A door is left open each time something happens in our lives that we feel could have been done differently.

What if’s appear so vividly.

The person in the “What if” is not me. Well they’re me and not me. Let’s put it that way.

You stare into these doors and watch scenarios of your life play through. It’s somewhat fulfilling to watch things play out differently here. That is until the “What if” lies to you. They always mention the heart and the mind when thinking. I don’t understand why they leave out the “Core You”.

You know that saying “the only person you can count on is yourself”. That’s the core you that they’re talking about. The core you, has been through it.

The core you will tell you the way it is when you look at the past with the eyes of “What If.”

Core You: I was in that scenario to a degree, but that’s not the way it happened.

I don’t know if time has re-written what’s happened but I know things didn’t happen like that.
This “what if” is only one door, but there are hundreds maybe even thousands. I never noticed all of them before. In this one I am the bad guy, in this one over here I’m the good guy, in this one there’s money, this one jobs, friends, enemies, wins, losses.

Why the hell, are all of these doors open?

Some of these are actually pretty funny. Some of these shouldn’t even be “What Ifs”. I mean I was actually happy things went the way they did.

Let me close this one.

In this one I was so stupid. I should slap that version of myself and steal my fictitious ME’s cigarettes on the other side of this door. Hey! Hey! Yeah you, come here. Come here for just a second. Give me those cigarettes.

Half of these need to be closed, like right now.

You know what I have no time for what ifs.

Besides I got somewhere to be. Do me a favor. When you leave, remember to turn off the lights.

I’m heading to the Village of Inequities.

Get there, when you get there. Don’t worry we’ll leave the light on for you.