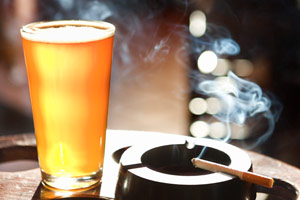 Newport 100’s the Cadillac of cigarettes, well at least in my opinion. After long nights at a bar nothing could remind me more of the wild debauchery that had taken place than my smoke filled lungs and my empty pack.

I have smoked thousands of cigarettes at Mercy College, possibly one of the things that I am most known for. On every campus there is a cigarette smoking area.

When it came to Mercy College, I was the cigarette smoking area. I know what many people are thinking “what a thing to brag about right?”

Well for a little more than nine years, cigarettes were my only quiet and peaceful time. I started smoking cigarettes at the age of Twenty-Two after a close friend of mine moved from NYC to LAS VEGAS in a day on a dare.

Actually Vegas introduced me to another vice. That vice’s name is beer. I could never drink more than one beer before I moved to Vegas, and by the time I moved back I was a hardcore chain smoking beer drinker.

My friend and I had moved to Vegas searching for something that wasn’t here. During our many beers and cigarettes he explained things to me that I could never see for myself.

He made me a better person, because at that time I really wasn’t. I was easily manipulated because I loved myself too much. When someone thinks there god’s gift to the world they easily forget what and who’s important in the grand scheme of things.

My friend saved me from myself. Cigarettes and beer were at the center of this.

Now, why would I give you that background on a cigarette blog?

We would have these conversations while playing caps in our living room in Vegas. The two of us would sit across the room from one another EVERYDAY and lob the caps from our bottled beer, at a cup filled with said beer.

Eventually, we had enough caps that we no longer had to buy bottled beer. Plus our everyday drinking habit was becoming a bit costly.

However, we had braced for the financial hit by cutting our food budget to compensate for our drinking habit – corporate America at its finest right there. Beast Ice, Nati Ice (Natural Ice), and Keystone became our go to beers. How do you like that one Keith Stone?

Now I know what many people think. If you can drink liquor you can drink beer- FALSE. I would lie on the cool floor attempting to catch my second to third wind. I would sit back up and he would ask “Are you ready?” every time he asked I knew what was going to happen –CLINK. He always made it.
This eventually led to my daily vomiting. Where he would ask if I was okay and I would then tell him to either shut up or vow my inevitable victory.
I forgot to mention that music was always played during these epic battles. Eventually I needed something that would cause us to take breaks during the game so that I could be able to last longer before the vomiting would commence.

We would listen to music smoke cloves and play caps, daily. In 2003, cloves were roughly $7-8 a pack. I felt that we should find a cheaper substitute. So while walking through the Orleans Casino, that we lived across the street from, I saw these long cigarettes that only cost $3.50.
Newport 100’s.
Newport 100’s would follow me on crazy adventures.

However, in 2012 I can’t keep up with the brand the way I once did and unfortunately had to part ways with cigarettes. It feels good to be cigarette free, but if I pretended that I didn’t have fun during the times that I smoked then I would be a liar. Instead of being a hypocrite I felt like keeping it real even if it was for something you might find to be stupid. Bronchitis ended my cigarette smoking habit cold turkey. I felt it was time to start searching for new ways to pass the time. I retired from cigarette smoking on April 6th 2012. My cigarettes were survived by two lighters and a book of matches.