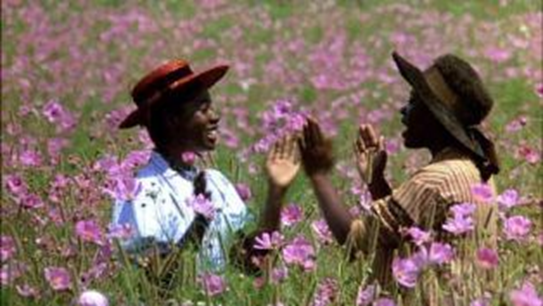 Political scientist and feminist Jo Freeman once said “ Women learn to see how social structures and attitudes have molded them from birth and limited their opportunities”. Based on Alice Walker’s 1982 novel of the same name, Steven Spielberg’s 1985 film, The Color Purple, is the epitome of a film which deals heavily with gender roles and how it’s social construction inhibit women mentally, physically, as well as sexually. Though it’s Celie’s story of becoming, the progressive nature of Shug, and outspoken attitude of Sophia are central to the theme and plot, and thus cannot be ignored. Because of the complexity of these characters, and the obstacles they encounter as a result of both conforming to and rebelling against the status quo in regards to gender, both oppositional and dominant readings can be found throughout the duration of the film.

Essentially a story of becoming, The Color Purple begins with Celie and her sister Nettie frolicking freely, and laughing innocently in the fields. The father tells Celie she’s “got the ugliest smile this side of Creation”. Immediately the sequence shifts to Celie giving birth to a baby girl, only having the chance to hold it for seconds before her father snatches the infant from her hands, and quieting her by demanding she “tell nobody but God” because “it would kill yo’ mama”. Fourteen year old Celie has given birth to two children, boy and girl,  by a man she believes to be her father. Only later, after his death, is it revealed that he indeed is not her biological father, however  it is he who lays the foundation for Celie’s confined gender constructions, by implanting in her mind that she’s ugly, thus teaching her to devalue her worth, as well as repress her sexuality.  He furthers these structures by forcing her to sleep with him, birth his children, give them away, and silence her in the process. This mental, sexual, and physical imprisonment become the way by which she learns to endure and “survive” life after leaving home, and marrying the physically, and mentally abusive Albert, or “Mister”, as she calls him.

Shug, on the other hand, is a whole different force to be reckoned with. Because of Shug’s overt, progressive, promiscuous,  flapper attitude, she is the real woman that Albert wants. Her sexuality makes her desirable. This is made evident to the viewer in the way Albert treats Suge in comparison to his wife Celie. Celie makes this plain to Suge later on by expressing how he “beats me for not being you”. In addition to Albert’s advances, he yet remains unable to attain Suge.  She’s a  traveling lounge singer, and while in town, she performs at Albert’s son, Harpo’s, juke joint. Her sexual charisma demands that she has complete attention of every man in the room, while the women that every man came with,  sit back, chatter, and observe. While Suge embodies the 20’s flapper archetype, family, most notably, a relationship with her preacher father, is the price she pays for her freedom. Drunken when she first arrives at Albert and Celie’s home, Celie nurses her back to health. It is in Celie’s tending to Shug’s vices that Shug monologues about the necessities of a father figure in the life of a child, and how her’s loves her, he simply “doesn’t  know it.”

While Celie and Shug represent two complete polar opposites of what it means generally meant to be a woman, outspoken, strong, and independent, Sophia is a progressive female, ahead of her time. Appropriate for the time at which the film was made, yet not particularly reflexive of the time in which the film is set, the characteristics displayed in Sophia are more likely to be seen in today’s society, especially since Roe.v Wade, feminist movements of the 70’s, and the integration of women into the workforce of the 80’s. From the moment the viewer encounters Sophia, in conversation with Albert over her impregnation by Harpo, it is Sophia the viewer sees exchange words with Albert, not Harpo. Typically women have been presented to be seen and not heard, however in Sophia’s case, she speaks out against Albert, fights back against Harpo, who tries to rule over her, speaks against the Mayor’s wife, and punches the Mayor. Because of Celie’s oppression, and Shug’s promiscuity, Sophia appears to be the most level headed, however, because of racial status quo of the American south, and gender constructions, punching the white mayor is which warrants extreme punishment.  For telling the mayor’s wife “Hell no” when asked if her kids can come clean her house, she’s antagonized, and returns a punch after being slapped, and is dealt a blow to the face with the butt of a pistol which permanently disfigures her. The imprisonment Sophia endures for eight years as a result of her outspokenness, and vigor for independence reaffirm the notion that women are indeed to be seen and not heard. She emerges from the depths of prison a changed, docile woman.

Because of the hardships these women endure, it can be inferred that they live in a world dominated by the male patriarchy. No scene embodies a dominant reading of the male patriarchy more than the scene in which Celie is married off to Mister. Pedophiliac in nature, after many glances at Nettie, Albert rides, on horseback, with the intention of marrying her. Because of the cultural custom, the father doesn’t permit him to marry Nettie, the younger, more “attractive” sister, but instead affirms that Celie  has been “spoiled twice” ,yet she’s “no stranger to hard work”. After enticing Albert, he calls Celie out, while both men exchange words, and Albert inspects Celie. It’s interesting that nowhere in the deal being made, are the desires and wants of Celie asked. She makes faces to her sister, yet remains quiet during the entire transaction. This dominant reading remains Celie’s truth until the end of the film in which she finally finds her voice around the dinner table with the entire family. Though she does indeed speak up, it is Shug, who initially informs Albert that Celie will be leaving with her and her husband. Though she only speaks after he inquires, for the first time in the film, as to what is bothering her, she releases the years of pinned up frustration and almost takes his life at the table. She calls, him a “low down dirty dog”, addresses Albert’s father and asserts that “he’d have been a half way decent man if he wasn’t your boy”, as well as , affirms that she’s never asked anything  from him, not even his “sorry ass hand in marriage”. Because of the time in which the film is set, and the gender which propels the plot, Celie’s dinner table explosion, though cathartic, is highly oppositional.

The oppression endured by Celie at the hands of men leave her with a void. After explicating that she doesn’t enjoy sex, but that Albert climbs atop her and “does his duty”, her sexuality becomes awakened by a kiss and sexual encounter with Shug. The igniting of this flame, in addition to her hardship leave her with a longing to be free from male dominance. While helping to liberate Celie, Shug, plagued by the need for her father’s approval, achieves her goal, thus liberating herself, yet perpetuates the idea anti-feminist idea that is the man, and his affirmation which give value to the woman. Sophia, though outspoken in the beginning, through a series of events, is mellowed out by men, by the culmination of the film. Because Celie is initially subservient and obedient, yet ends up without male companion, but Shug and Sophia, who fight against the social constructions, conform and are mated, this film perpetuates male dominance, yet can still be read in both dominant and oppositional manners.

Essentially the protagonist, Celie’s, story of becoming, Steven Spielberg’s 1985 film, The Color Purple, serves at the epitome of a film which backlashes the women’s movements of the 70’s and the progress of women in the 80’s. The complex menagerie of women, and gauntlet of oppressive men embody, through intent and innuendo, assist the film in embodying Jo Freeman’s words “ Women learn to see how social structures and attitudes have molded them from birth and limited their opportunities”. The women of this film do indeed learn how to see themselves through the lens of womanhood, though constructed by men. It is these constructs, which serve as the means to which they navigate their lives. This navigation, though seemingly attempts to arouse sentiments of apathy for women, and propel women forward, only, in the , reflect the status quo of male patriarchy.