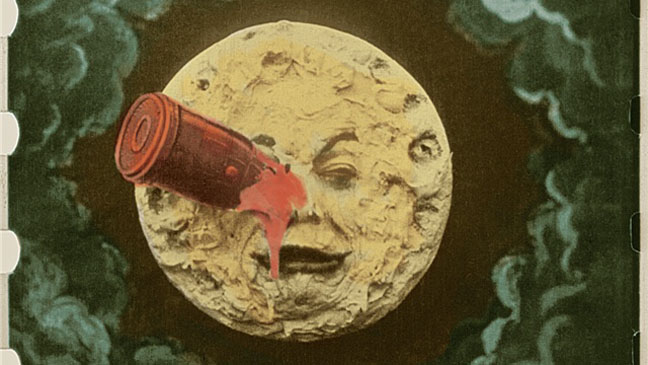 Throughout the duration of civilization many great cultural movements have taken place that have assisted in shaping and molding the world into the ever evolving product that can be seen today. For instance, during the classical era great thinkers such as Plato Aristotle, and Socrates thrived. During the Elizabethan Era, the sonnets of of Shakespeare and Donne resonated with their readers. Not to mention the Italian renaissance, great minds such as Michelangelo and Da Vinci, and the influence they had, which can still be observed around the world. The ame can be applied to film. Perhaps intentional, perhaps not, there is no denying that George Melies’ 1902 film ,Le Voyage Dans La Lune,  was not only pivotal in regards to early film history, and it’s technological advances to film, the film also gave birth to science fiction film, while simultaneously reflecting the dominant cultural climate of the time.

Le Voyage Dans La Lune, being privileged enough to be conceptualized early in film history, seeing as the film notably lacks audible dialogue and color,in addition to being produced prior to the German expressionist movement, is free from heavy influence, and thus lays the groundwork for later films. Serving as an early template for science fiction film, it can be said that Le Voyage Dans Lune, because of it’s position in film history, is a film in the experimental phase of genre film development. In the experimental or “primitive” phase, the filmmaker and the film do just that, experiment. In doing so, they set the rules of the genre (1) . Le Voyage Dans La Lune, because of it’s innovations with mechanical effects, lab effects, and editing, set the stage so that later science fiction film would rely heavily on special effects.

In regards to Melie’s use of mechanical effects in Le Voyage Dans La Lune, it is evident that much machinery and building took place to create the set. In the scene prior to the exploratory departure, an immense amount of steam can be seen emerging from the chimneys of the buildings in the distance. Another Instance in which the use of machinery is easily detected is the scene in which the travelers are shot from the cannon towards the moon. However minute this may seem to a 21st century viewer, these strides in technology were innovative. in the sense that the set was completely built. Melies use of Matte shots. which is a lab effect, much like the Wizard of Oz (1929 )is evident and imperative for the invocation of the fantastical, otherworldly theme. The Matte shot can be seen all throughout the film, yet becomes most evident and beautiful after the landing on the moon. The Matte shot highlights the beautiful, and only gets more complex as the thirteen minute long storyline progresses into the caverns of the moon. .  man made landscape on the moon Not only does Le Voyage Dans La Lune does well to make use of machinery, ropes, pulleys, and wires, it also is one of the first times the cinematic genius of the “dissolve” is used in editing to bridge the gap between scenes.

As mentioned earlier, Le Voyage Dans La Lune played an important role in the development of the science fiction genre. Outside of it’s use of machines and lab effects, the idea of space travel is, in and of itself, a revolutionary idea on camera. Keith Johnston’s academic text “Science Fiction Film: A Critical Introduction” records that ” the ‘Trip to the Moon’ offered it’s paying customers an experience that claimed to recreate a fantastic trip into space, relying on moving panoramas, purpose built sets, and costumed actors, the ride placed viewers in a large ship that flew to the moon…” (2) (Johnston,44). Not only do the explorers take the viewers on a mission to the moon, the film entertains the idea of alien life. This depiction of other worldly life becomes “the first example of scientific exploration of another world” (Johnston,64). While the genre of science fiction is not confounded to mere space travel, but has grown to include a wide variety of different topics, Le Voyage Dans La Lune is the first to branch mankind out into realm of space. In doing so, as mentioned earlier, it sets the rules of the genre, Because alien life is an unknown life force, yet to be understood, there is an element of mystery and fear that accompany this new found idea.  Le Voyage Dans La Lune introduces this theme/ rule of fear and mystery to the world. This laying down of the rules becomes pivotal to how man would later perceive and interact with aliens and the other worldly on film. This idea was so innovative that it’s effects can still be seen in films such as District 9 (2009), Alone in the Dark (2005), Ghosts of Mars (2001),

Outside of the surface appearance of exploration , Le Voyage Dans La Lune, is heavily reflexive of the cultural climate in Germany as well as around the world at the time. During the time in which the film was made many countries had colonies in various parts of the world. Germany was an active participant in this imperialistic phenomena. Laying siege to a various array of countries and people, across multiple continents, Germany had lands in Africa, Asia, and Oceania. Some of the various countries Germany had colonized were Cameroon, parts of the Central African Republic, Congo, Gabon, Nigeria, Parts of China, New Guinea, Nauru, and the Mariana Islands, just to name a few different places (3). This idea of imperialism and white superiority translated heavily on film. Johnston notes that Le Voyage Dans La Lune remains the “prime text in discussions of proto-science fiction film” because of it’s “… spectacular depiction of a human trip to the moon…example of scientific exploration.. construction, launch, discovery, interaction with the locals (often violent, as here), and triumphant return home.”(4) (Johnston, 64,65). The interaction of the white explorers with the natives is directly related  and consistent with the dominant culture of the time, not only in Germany, but the Eurocentric “white man’s burden” of the time. The idea that it is up to the white man to explore, colonize, and civilize the savage is evident in this film, and becomes apparent in the initial encounter with the aliens. Before getting a chance to understand that which is mysterious, and unlike them, the explorer, a guest in a foreign land, smites the alien with his umbrella. After encountering the gauntlet of aliens and escaping, the explorers smite a few more, return to their ship, yet bring with them an alien back to earth. Much like The New World (2005) or Columbus: The Discovery (1992), though these films have origins in actual history, the manner in which the explorers interact, kill off, then return home with a “sample” of the culture can be cross referenced, in application of dominant white culture, with Le Voyage Dans La Lune.

Throughout the duration of civilization, many strides have been made in regards to culture that have helped push intellectual, artistic, and technological progress forward. Though George Melies 1902 short film Le Voyage Dans La Lune is only runs a span of thirteen minutes, the effects this profound film has made to the world of cinema in Germany, and the world can still be seen in many films today. Establishing the rules of the Science Fiction genre, and pushing forward technology are just a few of the contributions Le Voyage Dans La Lune has made. However innovative this film may be to the cinematic world, it doesn’t, unfortunately do much to spread positive enlightenment, and tolerance of cultural difference. Though great for all it’s scenery and special effects, reflexive of the dominant culture, this film remains a product of it’s time.