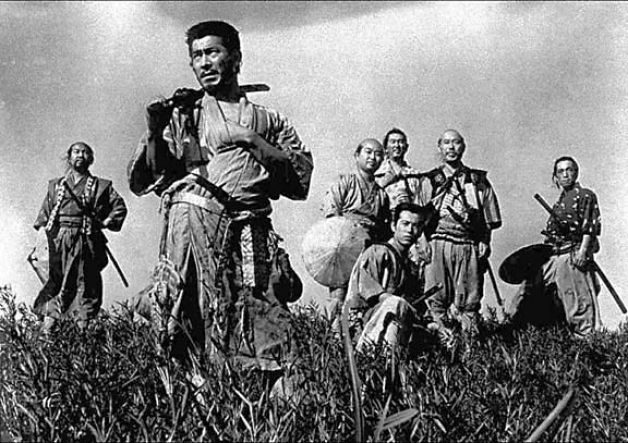 Akira Kurosawa’s 1954 film, Seven Samurai, is a film in which many of the different dichotomies entrenched within Japanese society are critically and effectively addressed. Through intense character analysis and observation of plot,  one can approach  these various dichotomies from many different angles. Because of artistic expression,  interpretation of film varies from person to person. That being said above all of the other dichotomies mentioned in the  assignment premise, the two conflicting ideas which stand out most are “Duty vs. Inclination” as well as “Fatalism vs. Optimism”.

When watching this film one cannot help but to simply admire the the zeal of samurai leader “Kambei”. Kambei’s character is the embodiment of  what  our first dichotomy “duty vs. inclination ” is in essence. From the moment Kambei is introduced to the audience until the closing sequence, Kambei recognizes that our feelings persuade us however, our feelings aren’t nearly as important as that which is our duty. In his first appearance Kambei rescues a seven year old boy being held hostage by a thief by impersonating a monk. Vulnerable, middle aged, and unarmed , he wrestles the boy from the clutches of the crazed man.  Later on in his initial encounter with the men who’ve been sent out to scout for “hungry samurai” his immediate response was one of empathy, yet initially he hesitated in pledging his allegiance to their cause. After sitting with a few of the men, hearing their  proposition, witnessing the mockery of the men by a few of the local men, and hearing their cries of desperation, Kambei is moved once again from empathy to action. Setting his own personal ambitions aside, he agrees not only to defend the village, but to assist in finding a few other good and “hungry” men to serve alongside him. After watching the people fall subject to eating a substance called millet, Kambei puts his time aside, and life on the line in exchange for the most basic of nourishments, a few bowls of rice.

Kambei is not the only character who puts his own ambitions aside for the betterment of the people. Because of the impending molestation of their living quarters, the entire village is forced to make a decision. The citizens can either bask in the ambiance of destitution, or brave the trials of life and fight for the right to live. Every male farmer is forced to take up ranks and join in assisting the seven samurai with the defense effort, however one farmer in particular stands out, a cowardice stricken, elderly farmer by the name of Yohei. Throughout the duration of the film one of the samurai named Kikuchiyo takes special interest in Yohei. Kikuchiyo, a man battling with own demons, repeatedly called Yohei out on his cowardice, forcing him to face his fears and fight while simultaneously instilling a sense of bravery in Yohei. By the time the scene comes in which Yohei is killed with an arrow to the back, he not only dies fighting but with his last breath he utters the words ” I defended my post”. Paying the ultimate price, his duty to himself as well as his peers superseded that which would alternatively incline him to internally falter.

Overcoming fear and age in correlation to our duties aren’t the only example of “duty vs. inclination” in this film. This film, although Japanese, is reminiscent of the Hollywood premise in which the protagonist “declares, climaxes, and resolves” within the plot. Although there is no immediate protagonist in this film, all three of these elements are fulfilled. In addition to these Hollywood standards, there is a also a love interest. This love interest between samurai, Katushiro, and farm girl , Shino, is the third and final focus of the “duty vs. inclination” aspect of this piece. Katushiro a young, and energetic samurai falls for a local farm girl named Shino, daugher of Manzo. In an attempt to protect the virtue of his daughter, Manzo forces Shino to cut her hair, wear men’s clothing, and defeminize herself while the samurai are in town. Manzo’s efforts, however valiant are fail when Katushiro discovers that Shino is indeed a woman and falls for her. She falls for him in return however, this society’s hegemonic standards shun the intermingling of samurai and local girls. Human nature, gender roles, youthful lust, and the anxiety of war all work together for a night of passion betwixt the two. Immediately after the two engage each other, Manzo discovers Shino and Katushiro. The idea of the two marrying isn’t even addressed after her “deflowering”, rather her father beats her and throws slurs, the village watches, the fight disperses, and the two go their separate ways. Human nature inclines the two to express their sentiments not only through sexual consummation, but through sacrifice of food, yet duty rears its ugly head in this circumstance and forbids the two from being together.

Another dichotomy heavily present in this film is the opposing idea of Fatalism vs. Optimism. Fatalism is the concept in which it is believed that  all events have been mapped out to transpire and nothing can be done to alter these events. Upon the first farmer’s eavesdropping of the bandits impending plunder of the village, the citizens immediately fall to their knees in anguish. Crying out to God, they claim that certainly “God must hate them”  for simply seeming uninterested in the welfare of the people. At first glance they seem willing and ready to embrace this concept of fatalism. Fearful, poverty stricken, and famine induced, the people initially entertain the idea of simply handing over the few rations of barley and rice that remain. This concept of fatalism even begins to transform among a few of the men into a spirit of cynicism. After deciding to send a few men out to scout for “hungry samurai”, the people agree to attempt to change their destiny.  However, bludgeoned by circumstance, they remain crippled with the disbelief that the samurai would put their own ambitions aside, risk their lives, and work for little to nothing. Even when the samurai arrive, they’re not made to feel welcome as they should. Shrouded with cynicism and fatalism, they’ve even been primed to equate the samurai with the bandits and, believe the samurai en route to help will only pillage their women.

Things begin to shift from fatalism to optimism after Kambei enters the town, assess the issues, ensures the commitment of the samurai to the cause, calms the spirits of the people, and raises the overall morale of the people. After realizing where there’s a will, there’s a way, and the people indeed have the power to change the outcome of the battle, the plaguing spirit of fatalism is lifted. The people join together in unity, and not only successfully defend the village, but manage to do so with minimal losses.

Optimism is a strong driving force in this film and is imperative for the survival of the village. The people must believe that they have a fighting chance, otherwise what is the point of it all? Ironically Kambei is successful in shifting the spirit of the people however his closing remarks and final dialogue of the film only serve to contradict that which he instills in the people. With a town full of joyous villagers, gleefully singing in the fields, Kambei, Katushiro, and Shichiroji overlook the graves of the other four dead samurai. Realizing his Pyrrhic victory, Kambei exclaims ” Again we are defeated… the winners are those farmers, not us. Kambei realizes that the life of a samurai is one fated with grief, loss, and death. His last words embody fatalism at it’s finest.

Akira Kurosawa addressed many a vast array of dichotomies in his 1954 film, Seven Samurai. This film, so simple yet profound, leaves the viewer with many different angles at which the viewer can take in assessing the different reactions, interpretations, and impressions Kurosawa was attempting to make when he released this film. At times it is not only appropriate, but necessary to elevate duties above individual feelings, yet, as the film has made it so profoundly evident, these duties often are fulfilled at a steep price. The same can be said when arguing fate against optimism. Fate doesn’t control every aspect of being. Some things can be changed. On the contrary, optimism isn’t applicable to every situation either. Some things are how they are, and the price that comes along with it, in certain predicaments, is an unchangeable factor.