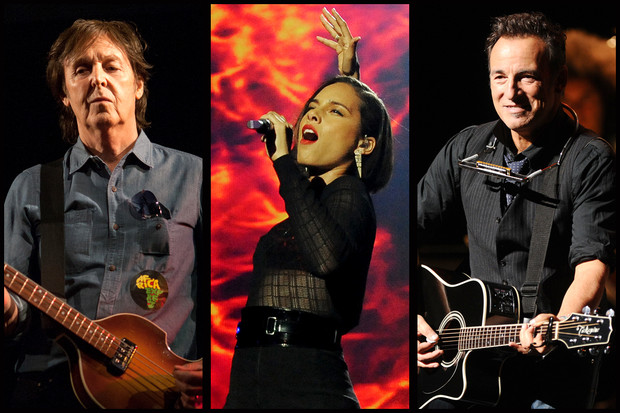 It was a night of music, comedy and celebrities at “12.12.12  “The Concert for Sandy Relief,” held at Madison Square Garden in New York City on Wednesday night.

While several top artists in the rock and pop genres performed for the MSG crowd, actors such as James Gandolfini, Jimmy Fallon and Jack McBrayer manned a phone bank where they accepted donations from viewers.

Forty cable networks televised and numerous websites streamed the event, the proceeds of which benefited The Robin Hood Relief Fund and victims of Superstorm Sandy. More than $30 million was raised through ticket sales alone.

Fittingly, the concert began at 7:30 p.m. ET with a “local” artist ,New Jersey’s Bruce Springsteen. The Boss and his E Street Band kicked off his half-hour set with a performance of “Land of Hope & Dreams.”

As he introduced “My City of Ruins,” Bruce noted that he wrote the song about Asbury Park, N.J. He described the Jersey Shore as an area for both the rich and poor, adding, “I pray that that characteristic remains along the Jersey Shore because that’s what makes it special.”

Bruce mixed “My City of Ruins” with a bit of “Jersey Girl,” a favorite of Springsteen fans that was originally recorded by Tom Waits.

Springsteen was joined by another Jersey rocker, Jon Bon Jovi, for his final song, “Born to Run.” Springsteen returned the favor during Bon Jovi’s set, teaming with the band on their hit “Who Says You Can’t Go Home.”

Springsteen and Bon Jovi were far from the only legendary rockers to take the stage over the course of the night.

Paul McCartney, the closing act, provided a special moment when he brought the former members of Nirvana on stage — minus the late Kurt Cobain. Foo Fighters front man Dave Grohl sang a new song called “Cut Me Some Slack.” McCartney also sprinkled in some crowd-pleasers like “Helter Skelter” and “Live and Let Die.” The Rolling Stones, in the middle of a 50th anniversary tour, played just two songs, including “Jumpin’ Jack Flash.” Mick Jagger joked at one point, “This has to be the largest collection of old English musicians ever assembled in Madison Square Garden.”

That “collection” also included The Who, which saluted their late drummer, Keith Moon, by screening footage of him singing during their performance of “Bell Boy.” And as he took over vocals on “Baba O’Riley,” Pete Townshend changed the lyrics “It’s only teenage wasteland” to “It’s only Sandy wasteland.”

The marathon concert ended with Alicia Keys returning to the piano to perform “Empire State of Mind” as McCartney, members of various public works departments and individuals personally affected by the Superstorm gathered on stage.

An album of select performances from “12.12.12″ will be sold on iTunes beginning December 18.

Here are the set lists from “12.12.12 — The Concert for Sandy Relief,” in chronological order:

Roger Waters “In the Flesh?” “Another Brick in the Wall (Part 2)” “Money” “Us And Them” “Comfortably Numb” (with Eddie Vedder)

Paul McCartney “Helter Skelter” “Let Me Roll It” “Nineteen Hundred and Eighty-Five” “My Valentine” (with Diana Krall) “Blackbird” “Cut Me Some Slack” (with Nirvana’s Dave Grohl, Krist Novoselic and Pat Smear) “I’ve Got a Feeling” “Live and Let Die”

At the end of the concert Alicia Keys came back out and sang her heart out with her version of Empire State of Mind, while New York’s Finest were assembled on stage with Paul McCartney.