The Famous “All Hallows Eve” 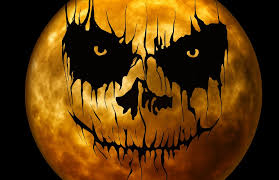 To be honest I wasn’t able to celebrate Halloween growing up. I grew up living with my mother and she is a Muslim. Muslims don’t celebrate Halloween. It seems like a fun holiday where everyone from kids, teens, and adults are in good spirits and decked out in weird freaky costumes. From the outside looking in I was still able to enjoy the holiday by watching everyone in town having fun. The streets would be painted and decorated in orange and black. Even some restaurants would be decorated with creepy Halloween decorations. I was never into scary things but the holiday seemed to interest me so I wanted to know more about the holiday.

I found out Halloween is also called “All Hallows Eve.” Some people say that this is the day that the dead come back to life and terrorize the living. I ‘ve seen plenty of movies that made BIG money off that concept. There are new Halloween movies every year with the same theme. Halloween actually is celebrated on the thirty first of October every year and is dedicated to remembering the dead. I thought maybe that’s where they got this whole dead coming back to life idea from. I was wrong! Some conspires say Halloween originated from Celtic harvest festivals which some believe to have pagan roots. After learning that much I instantly thought to myself “this is a holiday?”

Besides the freaky stuff kids are out with their parents and siblings trick or treating getting free candy. Teens are out running wild vandalizing the streets, getting drunk, and going to parties. Parents are inspecting the candy their child gets because there are a few weirdos out their looking to put razors and toxins into kids candy.

Even though this is a great day to have fun still have your guard up. There are freaks out their kidnapping kids and Halloween is a day loser pedophiles feed on. That rarely ever happens in my town but it’s still better to be prepared than scared. I usually spend my Halloweens inside watching the twenty-four hour Halloween movie marathons. I don’t like scary stuff so this is my only day of there year I’ll put up with it.  Sometimes I might go to the movies but I won’t go to a party because everyone will be dressed in a costume but I can’t.

People ask me all the time do I left out and I always say no. Don’t get me wrong the holiday seems cool but I understand why I don’t celebrate it and I been accepted that. I don’t even feel as though I’m missing out. My friends don’t leave me out they still invite me out with them every year. I’ll go out with my friends but I won’t be in a costume. I’ll still make sure I look nice though. As a kid I always had superhero costumes so I didn’t care if I didn’t wear it outside.  I was always a private and reserved kid growing up anyways.

I always take half of all my friends candy. They always drive out to the rich areas of town to get the best candy. They love when people leave the bowl outside. People leave the bowl out with a sign that says “take 1.” Do they really believe people are honest enough to do that? I wish people were but long story short my friends took the all the candy left in the bowl. Every time. You will still see people in their early twenties still trick or treating. Some people still have the heart of kid and won’t let anyone rain on their Halloween parade.