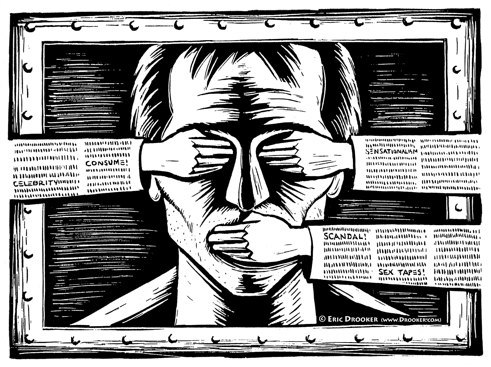 Many Americans take for granted the use of the internet, a immense source of information containing every piece of data at our finger tips. The internet contains opinions, politics and other valuable information beyond that of just social networking. There really isn’t anything you can’t find on the world wide web. That term world wide web is really obsolete now that some countries have decided to censor or block out the internet completely. When internet censorship comes into play it makes a impact on how users can have a web experience. Governments that are more like dictatorships have begun to censor the internet and even manipulating it to shape the minds of their citizens in a way comparable to propaganda.

A Paris run organization called Reporters without Borders advocates for freedom of press and information and fights to end censorship in all forms of media. The organization writes a list annually listing countries that are the worst offenders of internet and media censoring, they also produce a list for countries that are currently under watch. Some of the worst offenders as reported by Reporters without Boarders are Iran, Belarus, Saudi Arabia, China and North Korea. North Korea stands out the most because it is one of the dictatorships in that readily distorts information to control their citizens. People in rural areas of North Korea have no access to the internet while more well off people in the capital have access to a censored version of the internet with many popular sites such as twitter and facebook blacked out completely.

China, which is a communist nation blocks out and removes stories of any uprising of people such as removing any references to Occupy Wall Street, Egypt and the Arab Spring. Unlike North Korea the internet is much more widely available in China but Chinese officals have asked cafe’s not to provide free Wi-Fi. The Chinese government has protocols in place to monitor news websites and blogs which may express negative opinions of the government. Behave badly on the internet and you will be “invited for tea” down at the police station according to the Enemies of the Internet report by Reporters without boarders.

Free speech is not something that is readily available in many of the governments that censor the web. Many of us take our right to free speech for granted, in many parts of the world you could be killed for even making a blog post such as the case of blogger Sattar Beheshiti who was taken into custody for questioning in Tehran and mysteriously died in police custody during an interrogation. We are lucky to have access to two sides of the story through the internet, just consider how things could of been during the big election which would of had a drastically different outcome if the internet was censored. If the media on the internet was completely one sided there would be no point for an election at all. Internet censorship is not limited to Communist countries and dictatorships, even countries such as Australia, France and Russia have been sited by Reporters without borders as countries on their watch list.

Internet censorship even takes place in the United States but only affects illegal activity such as child pornography as well as sites thought to be threats to national security. Countries around the world are more stringent than the United States on what it calls moral and social filtering such as the blocking of gambling, LGBT and even political satire websites. The internet is immensely popular because of how vast the information is and how varied opinions are. The United States may have some understandable censoring activities for the safety of it’s citizens however that is not to say that there have been a few proposals to expand internet censorship. Such an act was proposed in the form of the Stop Online Piracy Act which and the Preventing Real Online Threats to Economic Creativity and Theft of Intellectual Property Act of 2011 along with the Anti-Counterfeiting Act which would like to be able to black out websites making them unusable by American citizens. As college students and frequent users of the internet we must pay attention to the laws being presented in congress and take action as we did to halt the passing of SOPA