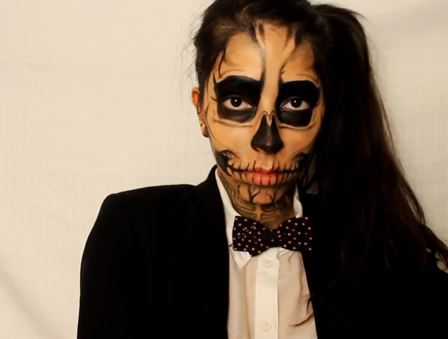 It’s not uncommon for people to end up making fools of themselves on Halloween, but the great thing about Halloween is that it’s OK to look a bit foolish. YouTube is full of Halloween make-up tutorials and I thought I’d try my hand at the simple “$1 Lady Gaga “Born This Way Skeleton” make up tutorial. The video was posted by one of my favorite make-up gurus Bethany aka “Iwanted2c1video”. The video states that there is only one material needed for the look, an eyeliner pencil by Wet n Wild, commonly sold in drug stores for $1. “Okay, a buck? Well, I guess I’ll give it a shot “ I said to myself. The tutorial is inspired by Lady Gaga who was herself inspired by the tattoos of Rick Genest also known as Zombie Boy. 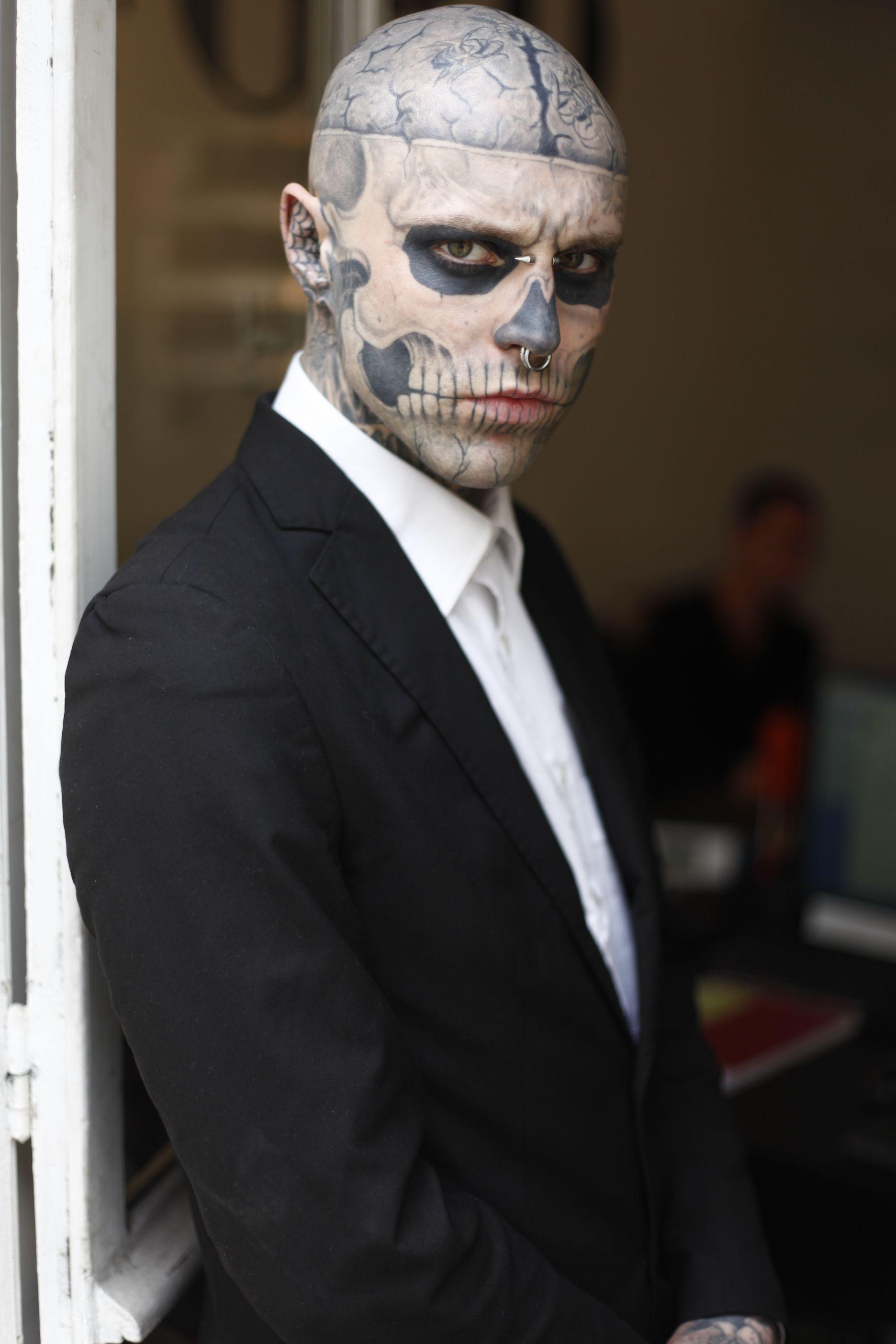 I had planned on trying this tutorial out, but was putting it off because I don’t like make up around my eyes, but I took one for the team and powered through the video. I found some cheap black cream make up at Target for only $1. The video begins by showing users a face chart, face charts are a simple way for make-up artists to share looks with each other and are used as a guide to recreate looks.

“Okay, so the face chart looks simple enough, just a couple of lines, this is going to be a piece of cake” I thought to myself.
I started off by outlining my eye and nose as stated in the video, using an e.l.f. eyeliner pencil. Then  I moved on to drawing the maxillofacial bones of the skull, such as the zygomatic arch more commonly known as the cheekbone. Bethany makes a point that one of the most important features of this look is shading. The shading aspect can be  difficult but I used an e.l.f. blending brush to help with the process. The process didn’t turn out as  bad as I thought it would be and added a real realistic effect as opposed to just resembling face paint at a county fair.  Following that, I opened up my tube of black crème Halloween make up, typically Halloween make up is of extremely low quality so I didn’t have huge hopes for it. After applying it all over my eyes, I have to admit the process wasn’t as bad as I thought. I used a shadow brush from e.l.f. to complete that process. The make-up itself wasn’t too bad, it was very creamy and then began to set, it was still transferable to the touch but that could be fixed if I had bothered to set it with shadow. If the video seems to be going to fast for you, pause it and take your time to really enhance the details. I neglected to follow through with the face chart down my neck, maybe it was the unrealistic shape of the neck vertebrae, that turned off my anatomy loving brain. Or maybe it was just my laziness?

I found that if one was trying to recreate this look with just an eyeliner pencil, it would take a very long time and end up being very difficult to blend out. If you end up using a cream based drug store Halloween make up, you are definitely going to want to set it with black eyeshadow or else it will not last.  A few last minute tips to remember if you are going to try this look, rinse the black make up out of  your brushes right away or else it may stain them, do not attempt to remove this make up with a wash cloth. Instead, try using a paper towel or make up removal wipes, it will make the removal process way easier. I would the tutorial a 10/10, although I lacked the artistic skill of Bethany, I was still able to come out with  a decent look.

All in all, I was happy with the finished product, although one of my least favorite 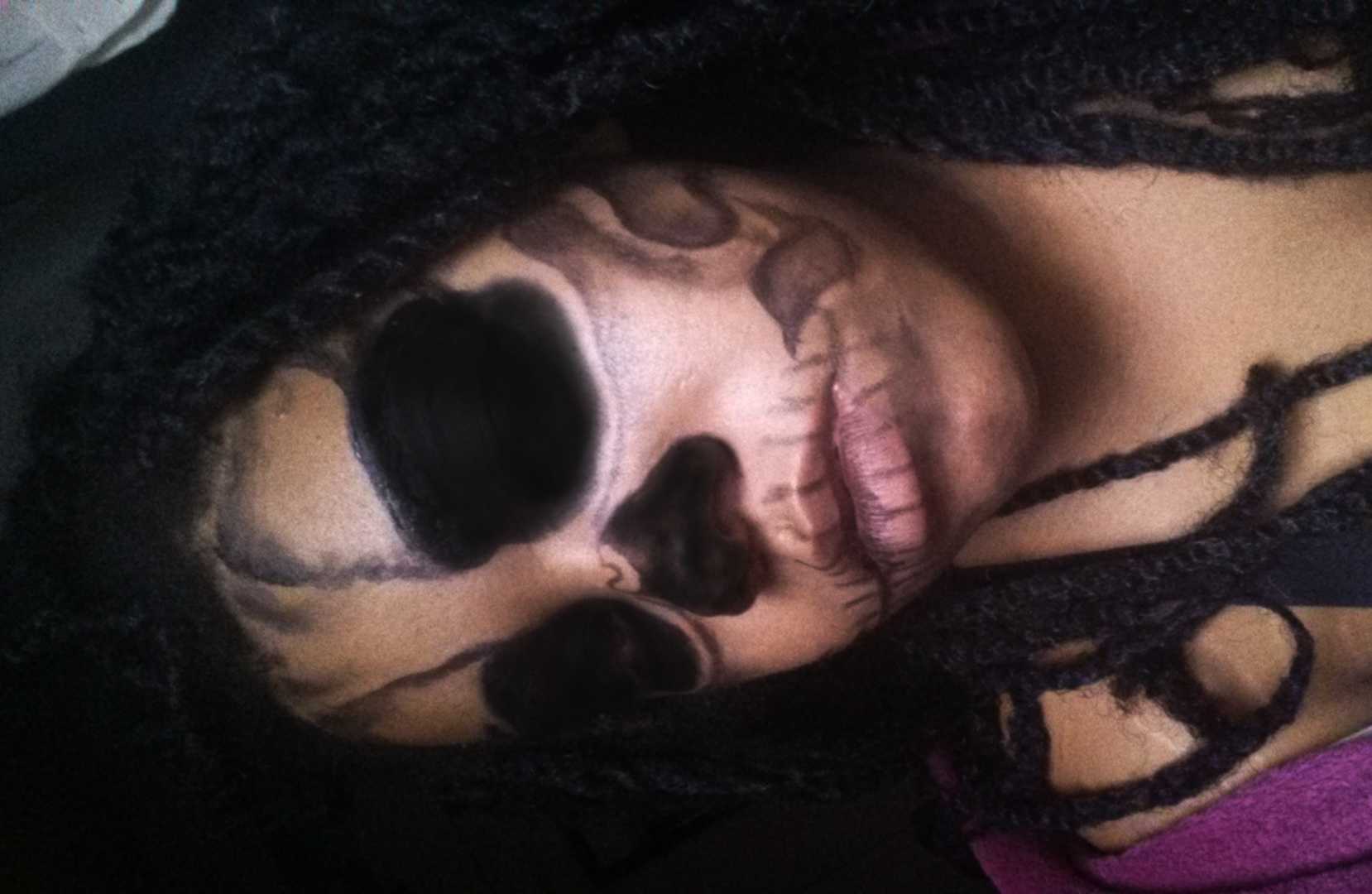 friends remarked that I looked like a witch doctor. I didn’t mind the dig at my less than perfect make up skills. I was proud as I am after any DIY project that has gone awry. There is definitely an added satisfaction to creating something with your own hands. The moral is that even if you don’t look exactly like the tutorial, it doesn’t matter its Halloween just have fun!