Do Dogs Even Have Brains? 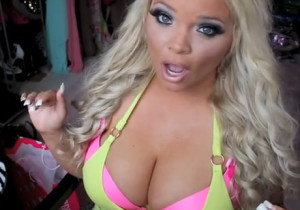 A popular YouTube performer recently posted a video with the title “Do Dogs Even Have Brains”, where Trisha Paytas, an actress and plus size model questions whether or not man’s best friend has a brain. The subject of the video is not to quantify the variable intelligence of canines but rather to question whether their craniums “even” contain the organ. The video in question has had its fair share of controversy where many have accused Paytas of lacking a brain herself.

” I tweeted do dogs like have brains because I like seriously wanted to know ” later in the video she Paytas states “of course dogs are mammals right? Yeah! They’re humans, no not humans, they are a part of the animal kingdom god created. I love you Jesus! But then I wonder, do dogs have brains because dogs can’t talk, yes they can walk but that’s because we’re telling them to walk just like if I tell my computer to turn off it turns off but that doesn’t mean it like has a brain, you know what I mean?” said Paytas
To answer the question in the title yes, dogs have brains. How do we know dogs have brains? Well its simple any organism with a higher order function such as reasoning definitely has a brain. Sure, it’s true that not every living thing has a brain however most multi cellular eukaryotes have some form of a nervous system, no matter how primitive

Paytas’s video content is typically -standard for YouTube, wit beauty tutorials and vlogs, but every now and then she finds herself in the middle of a controversy. Payta’s video “How to eat a banana” has gotten over 1.6 million views and a fair share of hateful comments, with some calling her a “dumb blonde” or “illiterate cow”.  Many of her viewers view her as a “dumb blonde” but I have begun to speculate if anyone can be this stupid? The answer to that question is no, not in this particular case anyway. I propose that Trisha Paytas has followed in the footsteps of Jessica Simpson and Nicole “Snooki” Polizzi who have all found their Chrissy Snow niche in the entertainment world.

My suspicion is that Paytas’s dim witted behavior is actually a farce. The young woman is an actress who pretends to be dumb for the entertainment of her followers and doesn’t mind being made fun of for the paycheck that comes along with millions of views. In fact what makes her channel seem so authentic is because I believe some of it is truth with a bit of reality TV scripting.

If I am correct, her viewers may be pointing and laughing but behind the scene Paytas is counting the cash with a smug grin thinking to herself “Whose stupid now?”  I fully assert that Paytas is running a scheme not unlike the infamous “lonelygirl15” which followed the life of a teen girl for months before finally revealing the web series was scripted.

My assumption is that rather than being a con-woman, Trisha Paytas is a comedic genius with perfect timing and excellent acting skills, this notion comforts rather than making me weep for humanity if she was serious. Not only is Paytas a very good comedian she is also an astute business woman who has written books and promotes her fragrance.  However her inability to separate her comedic videos from her real ones leave viewers confused. The question then arises is it okay to deceive the public in such a way? While also forcing the question of the sexist and what many can argue anti-feminist subject of these videos. For example Paytas uses her curvaceous body to her advantage and frequently makes her video thumbnails pictures of her cleavage and is not shy about flaunting the blonde Barbie stereotype and comes complete with even a tanning addiction featured on the train wreck TV series “My Strange Addiction”.

While I’m not expressly condoning the actions of this particular YouTuber I am definitely not condemning her. If the channel is indeed a joke it is no different than Johnny Knoxville and his fellow Jackass performers perpetuating the stereotype of young Caucasian and reckless males who do nothing more than party, wreak havoc and indulge in more beers than food. However I do wonder if the young women who are fans of her videos may be getting the wrong message after viewing her extravagant lifestyle.

The act of pretending or even hiding intelligence is a dangerous line for women to cross. College is a place where you can really find yourself not to adopt a persona that allows for you not to be taken seriously by your peers. Many young women are still under the antiquated notion that men are not attracted to women who are smarter than them. This view is primarily unfair to the men in this world who are being lumped into one category of idiot caveman intimidated by the intelligence of a woman.

The thing that men find endearing is when a woman shows a bit of vulnerability without playing the dumb damsel in distress who needs a man to take care of her. It is easy to compare the attraction of men to vulnerability to the attraction women have to strength. The thing that we should all remember in the struggle for gender equality is that neither gender should be diminished to feeling one way or another about the opposite sex.

The bottom line is the next time you see a dumb blonde on TV before you pity her, maybe you should check her business model and net worth.