OMG! Can I Touch Your Hair? 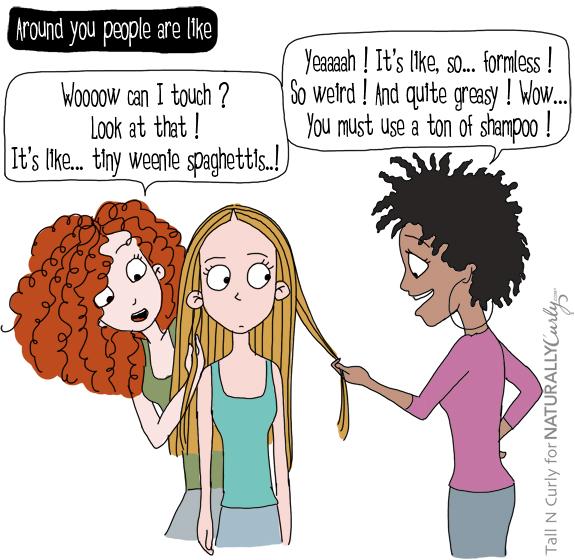 As an African American woman with mixed textured tresses, I find it very insulting and quite annoying when someone asks to touch my hair. As a child I would painfully cry whenever my mother attempted to do my hair being that it was so coarse and unmanageable. Fast-forwarding to present tense, I love my natural hair. I know I sound as if I belong with the natural hair committee but in all honesty I enjoy being able to allow my hair to do as it pleases. Sometimes I’ll wear my hair curly which requires very little managing but seems to gain the most attention.

New Yorkers have little to NO shame in staring. Things that seem to be interesting or confusing to New Yorkers results in stares and finger pointing which annoys the hell out of me. It doesn’t even begin to stop there, sometimes if they are daring enough I will get the never ending question of… “Can I touch your hair”? This question makes my body shake in anger. I have never understood how people, strangers feel comfortable asking someone to grab or touch their hair.

I recently came across a documentary titled “Good Hair” by actor and comedian Chris Rock. In the documentary, Rock travels from state to state asking and gaining a perception of African American women’s hair. With the help of celebrity friends Rock questions American women on what they believe to be “good hair”.

I, truthfully watched about one- third of the documentary before cutting it off. I believe it is stereotypes such as “good and bad hair” that makes women go gaga over the whole natural era which is currently happening. In the small section of the documentary that I did watch, women who wore weaves were not comfortable with Rock touching or asking about their hair however; women who wore their hair natural seemed more interested in Rock’s documentary and carried a more positive, welcoming approach. My view of this documentary is that there is no such thing of good or bad hair. Relating more to a general public I came across an article on XO Jane recently where a Caucasian woman discussed her anger with people asking to touch her hair. She characterized her hair as being a mixed texture which would explain her tight curly hair and the many o’s and ah’s she received. The writer went on to explain her anger of living in New York City and having to constantly deal with onlookers, she also went on to explain her daily routine of hiding most of her hair which I found to be ridiculous. Finding women who go through this on a daily basis definitely strikes my interest.  Is it just a culture thing? A texture problem? Or is it really just that frustrating to have others touch at your hair?