A Tiny Country with a lot to Offer

When a person asks me, “where are you from?” I answer them, “from Ecuador.” The person looks at me and says “nice, that’s in central America?” or sometimes she/he says, “where is that?”.
I know Ecuador is such a tiny country that you barely hear about. A lot of people can’t figure out where it is. They just know it’s somewhere in the equator but not exactly where.
Well, Ecuador is in South America, under Colombia and surrounded by Peru and the Pacific Ocean. Once, it used to be part of “La Gran Colombia”, together with Venezuela and Colombia. If you ask an Ecuadorian why they are so tiny, they’ll say is because Peru stole land from us. Most Ecuadorians still have a grudge on Peruvians which doesn’t make sense. Ecuador lost lands decades ago and that’s considered part of history and in my opinion, we should not see it as happening now.
Comparing Ecuador with USA, the state of California has a similar size as Ecuador. Yes, that’s how big Ecuador is. Ecuadorians should be proud of their country and I’ll explain why; In this tiny piece of earth, we have 4 regions. Coast, surrounded by the Pacific Ocean, thanks to this feature Ecuador exports a lot of seafood like shrimp, fish, crab and many more. Mountains or Andes region, from north to south, Ecuador is formed by mountains and volcanos. Most of them are active because these mountains are part of the famous chain of volcanoes “Ring of Fire”, according to Wikipedia “The Ring of Fire is a major area in the basin of the Pacific Ocean where many earthquakes and volcanic eruptions occur”. This means, Ecuador will not be saved if for God’s sake those volcanos decided to erupt. However, believed or not, the soil around those volcanos are the best one for farmers. Thanks to all the minerals that enriched and make the soil fertile, farmers can get the opportunity to work in these lands and produce many of the vegetable and unique fruits that can be find in Ecuador. 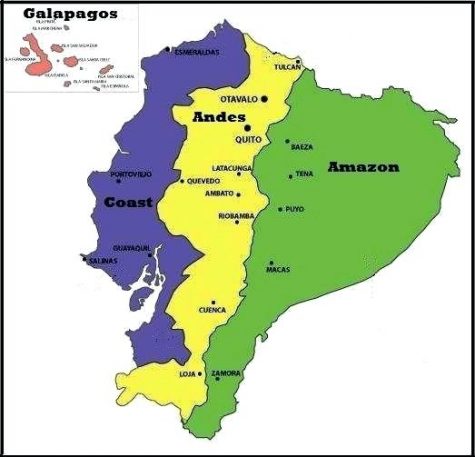 The Amazon region has a lot of forest, which is why for this reason sometimes people think Ecuador is a jungle. The Amazon experiences a lot of rainfall, sometimes exceeding 5,000 millimeters (196.9 in) per year. In the Amazonian region we can find exuberant animals like boas, anacondas, jaguar, pumas, amazon dolphins, yellow handed titi monkey and many more. Many of these animals, such as colorful and exotic birds are illegally captured, to sell or have as pets. 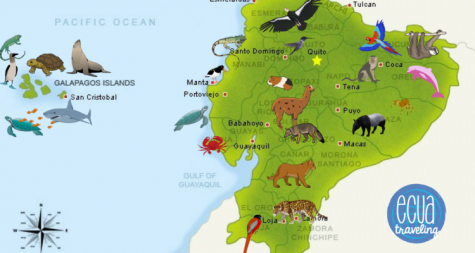 Depending in which region you are, you can enjoy from cold to hot days and rainy ones too. In the coast area, temperature is always on the upper 80 F degrees, you can enjoy the beach areas most of the year. In the mountains, climate is always around 50 F degrees or lower. In the amazon region, you will have to carry your rain coat and an umbrella because you never know when it’s going to rain.
The most famous region Ecuador has, is the Galapagos Island. Wikipedia says “The Galápagos Islands is a volcanic archipelago in the Pacific Ocean. It’s considered one of the world’s most famous destinations for wildlife-viewing.” Unfortunately, I haven’t had the pleasure to go there but it is in my bucket list. I know that it’s such a marvelous place. You can see iguanas, sea lions, giant turtles and many more wild animals walking around the sea shore. You will not be able to touch them, but you can see them close.

As you can see, Ecuador might be tiny but in that tiny place there’s a lot to explore. Just as the regions vary, Ecuador’s food varies from city to city. Ecuador has 24 provinces, 7 provinces in the coast region, 10 provinces in the mountain’s region, 6 provinces in the Amazonian region and 1 province in Galapagos. In every province you will find their unique dishes and fruits. What a lot of people think about Ecuadorians is that in the whole country they eat guinea pigs. That’s totally wrong, guinea pigs are a tradition for some of the Andes or mountains region, it’s common to see these kinds of dishes in the town’s festivals. When someone hears that you are from Ecuador, people automatically assume that you eat guinea pigs. I haven’t tasted them but when I ask people that eat guinea pigs, they say it tastes as a small roasted pork. Who knows? Maybe I should try it one day to see if I recommend it. Even though I know that I am bad when it comes on trying new kinds of meats. I love seafood, I am from the coast area, I love shrimps, fish, crab, octopus and I think I have tried 80% of seafood or maybe less? I don’t know, I just know that I always choose dishes that have seafood in it.
Ecuador also has a lot of tourism to offer, there are activities in each region and they vary from family activities to extreme sports. Humpback whales are seen along the shores of Ecuador from approximately June to September. It is the warmer waters that attract the whales because it is better for the new born calves.
I am proud of where I come from because is such a unique place. Ecuadorians should feel lucky for coming from this little paradise. It has so much to offer and everything is in one tiny country.