Women's soccer team of to a winning start 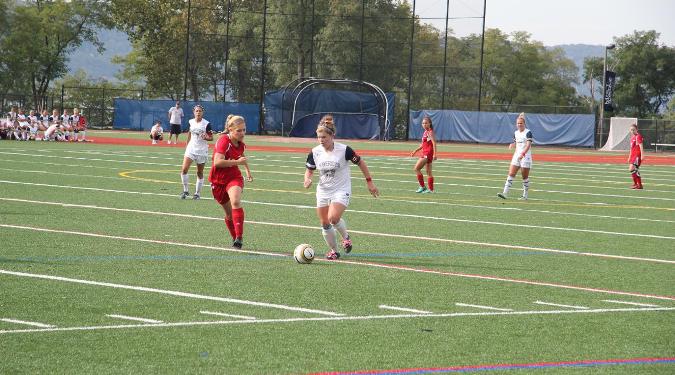 The women’s soccer team has kicked off to an unbelievable start.

So far the Mavericks have played their way to a 9-1 overall record and a 4-1  record in the East Coast Conference.

The team started off winning their first six games against opponents such as Pace University, NYIT, and Saint Thomas Aquinas, who the team defeated, 4-0.  The team suffered its first defeat of the season on the road against rival Bridgeport University by a score of 2-1.  Even though the Mavericks will not hold an undefeated record for the season, they still hold an undefeated record at home (6-0).

Mercy rebounded with three straight wins without allowing a goal. Mercy defeated Nyack 2-0, Queens 2-0 and Dowling for its most recent victory on Oct. 9 in double overtime, 1-0.

Senior Caitlin McKenna’s goal in the 104th minute won the game. She was set up by Jennifer Vega for the winner. Nicole Augustine recorded her sixth shutout of the season and third in the conference. She is .839 save percentage with 26 saves and a .40 goals-against-average thus far.

Mercy has gained two spots in the NSCA East Region Poll and is now ranked fifth.  Mercy has a big showdown on Oct. 14 against St. Rose, who is currently ranked third at 3 p.m. in Dobbs Ferry.

The team is led by Coach Jonathan Feinstein. who in his fifth season as head coach has the team competing at an extremely higher level than the last two seasons where the Mavericks finished the season second to last in the conference.

Senior midfielder Jackie Karras, who is majoring in pre med, was named East Coast Conference week three offensive player of the week.  Karras had a total of five points which consisted of an amazing game tying header goal versus NYIT, in which the Mavericks won the match three to one.  She also had one goal and one assist in the win over Saint Thomas Aquinas.  This is a big turnaround for the senior who only played in four games last season due to injury.

With nearly half the season behind them the Mavericks still have some tough games ahead of them.

This season looks to be a promising one as the Mavericks attempt to kick their way to the top of the East Coast Conference standings in hopes of capturing the title and moving on to the NCAA Division II championship.