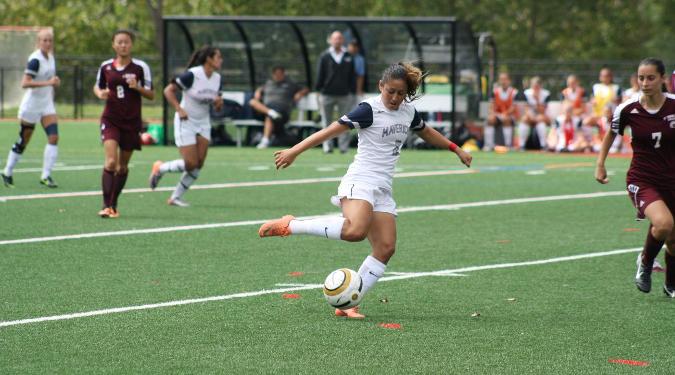 The women’s soccer team made No. 23 ranked Bridgeport claw, scrape and bite for every inch in last week’s ECC championship final, in which the Mavericks came up just short, 1-0, in Bridgeport on Nov. 9.

The loss puts the Mavericks at 13-4-1, but does not end their season. The conference championship finals appearance puts Mercy in a good position to be selected to the NCAA tournament. Mercy has been ranked as high as sixth in the East Region, and after their performance in the conference playoffs, a similar ranking is expected.

The Mavericks feel behind 1-0 nine minutes into the game after a score by Amanda Moura. Mercy fired off six shots at ECC goalkeeper of the year Julia Hansson, but none were able to penetrate. Sophomore Nicole Augistine played excellent for the Mavericks, registering four saves for the Mavericks on 11 shots on goal.

Two days earlier, Mercy hosted third-seeded Queens College, who had just come off a win of then ranked No. 16 Bridgeport. Mercy rallied from a goal down to win, 3-2, in overtime when Jennifer Vega scored in the 96th minute.

Down 1-0, Mackenzie Cochrane tied the game at 58 minutes after a penalty kick. Queens scored two minutes later to regain the lead, when Viridiana Ortega found Jessica Carrillo at six minutes later. Mercy almost allowed Queens to answer quickly again, but a goal was called off due to an offside penalty.

Seven minutes into the overtime, Danielle Deeb fired a blast that was deflected by the goalkeeper that bounced near Vega, who put the gamewinner in the net at 96:51

Mercy had defeated Queens College earlier in the season, 2-0. Bridgeport knocked off the LIU Post in the other semifinal match.

Mercy College women’s soccer has not been this exciting in many years.  For the last five seasons, the Mavericks have been ranked at the bottom of the East Coast Conference with no chance of successfully competing in the conference tournament.  This season, that all changed.

To get to the playoffs, the Mavericks great defense and explosive offense earned them a 6-2 record in the conference and a 11-3-1 record overall heading into the final week of the season when a playoff berth was not guaranteed. A 2-0 victory against Roberts Wesleyan on Nov. 3 earned the team the number two seed in the tournament, along with LIU Post losing to Queens College, 1-0, on Saturday, and Dowling College tying with Molloy College, 1-1

The Mavericks posted a 5-2-1conference record in the month of October in a tight race with conference foes LIU Post, Robert Wesleyan, Dowling and Queens(N.Y) for the second place berth in the tournament, but each team had one game remaining on the schedule which could have created several different scenarios for the seeding.

On Oct. 23, the Mavericks traveled to Pennsylvania to play a non-conference game against Philadelphia University.  With no goals scored by either team, the match ended in a 0-0 tie.  This was the first tie of the season for the Mavericks.

The Mavericks suffered a tough loss on Oct. 26 in Brookville, New York, losing to conference rival LIU Post by a score of 5-2.  Jackie Karras and Mackenzie Cochrane each scored a goal and Jessica Carrillo chipped in with an assist, but it was not enough to overcome the five goal performance of LIU Post.   With this loss the Mavericks fell out of the number 2 spot in the conference.

On Oc. 29, the Mavericks hosted Daemen College in a conference match that would prove to be very one sided.   The Mavericks needed a win to keep pace with the other teams in the conference for the number 2 spot.  After an early unassisted goal by Daemen, the Mavericks kicked back with an overwhelming six unanswered goals.  Caitlin Mckenna led the Maverick attack with 2 goals.  Crystal Mena, Abby Zielinski, Jackie Karras and Jennifer Vega each scored goals as well.  Jessica Carrillo , Meghann, Jackie Karras, Stephanie Manta, Taylor Horgan and Caitlin McKenna each had an assist.  This win helped the Mavericks reach a 6-2 record in the conference, which was extremely important for the seeding for the tournament.

Last week also marked a special day for the Mavericks women’s soccer team as they celebrated senior day and honored several of the teams players.  Carla Hager, Jackie Karraas, Stephanie Manta, Caitlin McKenna, Crystal Mena, Viridiana Ortega, Hannah Ritchie, Jennifer Vega and Meghann Warboy were all honored for their outstanding effort and contributions on an off the field during their careers at Mercy.