Mercy Soccer Falls to Adelphi in first round of NCAA Tournament 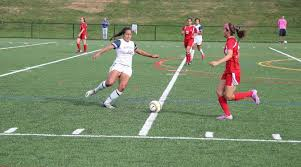 It was a very successful year for the Lady Mavericks, they just came up a bit shorter than they would have hoped

The early summer mornings, the brutal conditioning in 90 degree weather, and daily practice are what teams go through in hopes of one goal. That goal is a championship title. Every season, no matter what it is, has the ultimate goal of hoisting up the title at the end of the season.

For the Mercy Mavericks Women’s soccer team, they came close to achieving there goal, but they fell short on Friday afternoon against Adelphi in the first round of the NCAA Division II Women’s Soccer Championships taking place at the College of Saint Rose in Albany, 5-0.

Adelphi was 13-2-4 heading into the game, while Mercy was 13-4-1.  Adelphi was able to get the first goal of the game rather quickly as forward Victoria Antonino was able to sneak one by Mercy sophomore goalkeeper Nicole Augustine in the second minute of the game. Mercy had a good chance to tie the game up once again when junior Jessica Carrillo attempted a shot off a nice pass from senior Crystal Mena, but unfortunately for the Mavericks, the shot just went wide of the net.

In the eighth minute of the game, Adelphi was able to net another goal which gave them a 2-0 lead early in the game. The goal was scored by Aimee Goldstein.  All day long, Adelphi put pressure on the Mercy defense, which was forced to work extremely hard all day. by halftime, Adelphi was able to score two more goals, and take a commanding 4-0 lead. Coming out of halftime, and throughout the entire second half of the game, Mercy’s defense settled down and was doing everything in their power to try to get back into the game.  In the second half, Mercy only allowed one goal, which came with just eight seconds remaining in the game. The defensive front was led by junior MacKenzie Cochrane, senior Carla Hager, and senior Caitlin McKenna, who all played very strong all day. While the defense was giving it all they had, the offense for Mercy was just not able to put a shot in the net. While they had some chances, the defense and goaltending for Adelphi was on it’s ” A” game all day. Whenever Mercy had a shot on goal, Adelphi goalkeeper Sam Whitney was able to turn the Mavericks away.

At the end of the game, the scoreboard read 5-0 in favor of the Adelphi Panthers.  Unfortunately for the Mavericks, their season ended earlier than they would have liked. But the Mavericks have nothing to hang their heads about. The team finished with an impressive record of 13-5-1.  The team went 5-0 against teams in the East Coast Conference in the regular season, and reached the finals of the conference tournament.

The Mavericks had four All-ECC selections in Jessica Carrillo, Crystal Mena, Abby Zielinski, and Jennifer Vega.  Players on the team earned ECC offensive player of the week honors twice during the year, the ECC defensive player of the week once, and ECC rookie of the week an impressive three times.  The team was also awarded multiple ECC Honor roll awards throughout the season.  Also receiving an award was coach Jonathan Feinstein, who was named the ECC Coach of the year.

After the game,Feinstein  said, “We had a great, historic season that I hope has done a lot for the program. As I’ve said before, in preseason we thought we had a chance to make  it as far as we did if everything broke right. I told the senior class when I recruited them that they could get here if they worked hard, and now they all believe that. Now we have to try to keep it going.”