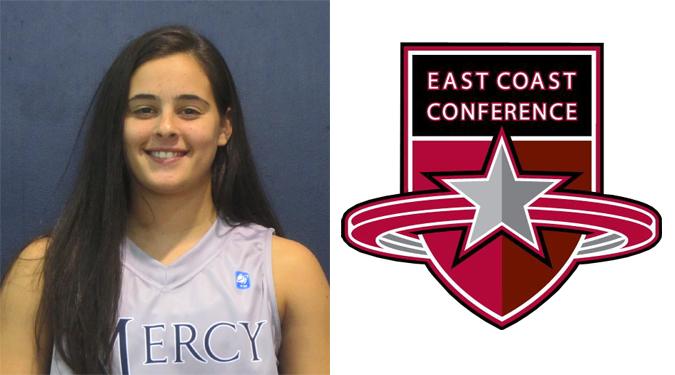 While the Mercy Mavericks women’s basketball team has had a tough season in terms of pulling out wins, two players on the team have really put together strong seasons for themselves.

These two players are freshman guard Maggie Salomane, and junior forward Tanayzha Augustine.  All year, both Salomane and Augustine have put together strong games seemingly day in and day out, and have been the leaders for this Mercy Mavericks squad in terms of play on the court.

Coming in a just 5’4, Salomane is shortest player on the Mavericks, but her play is anything but small, and her ability to come up big in certain situations makes her play seem even bigger.  In most cases, being a freshman athlete on any college team is tough. College athletics are much different than high school, so it normally takes time for the athlete to make the needed adjustments. For Salomane though, that has not been the case. Right from the start, the freshman from Narragansett, Rhode Island, has looked like a seasoned veteran.  So far this season, Salomane has started all 20 games at the guard position, and it looks like she will have that position locked up for the next three years.  Salomane has the team lead in three pointers made with 40, is second on the team in assists with 43, and has been close to automatic at the free throw line, connecting on 103-140 foul shots, which also leads the Mavericks.

Throughout the season, Salomane has been awarded many honors for her strong play, Just last week, Salomane was named the East Coast Conference Rookie of the Week for women’s basketball.

When asked about the play of Salomane, Mercy Mavericks coach Rashidi Aikens said, “Maggie is playing well in her freshman year.  She is improving with her knowledge of the game.  I knew she would be a positive impact on and off the court for the women’s basketball program.  She is one of the building blocks that will have the program improving annually.  We have already made progress this year, and look forward on building on that by adding more pieces to the roster.  As we move closer to the conclusion of this season, we are looking for her to take steps into maturing as a leader on and off the court.  Maggie has a will to win and is coachable; as she continues to develop she will be a big asset in the progress of the program.”

The future is bright for Salomane as a Maverick.

While Salomane has been a nice player at the guard spot, junior forward Tanayzha Augustine has had a terrific year of her own. Augustine seems to do a little bit of everything for the Mavericks. It seems that every game Augustine either records a double-double, or is close to achieving one game in and game out. Augustine has played the most minutes on the entire roster, and for a forward who is constantly battling down low for rebounds and play defense, that is an incredible feat to accomplish. Like Salomane, Augustine has started all 20 games, and is actually averaging a double-double with an average of 11 points per game, and 11.5 rebounds per game. She is also the team leader in blocked shots with an impressive 34, and that total puts her right near the top of the East Coast Conference.

With Augustine returning for one last season next year, and with Salomane playing with a year under her belt, the Mercy Mavericks basketball team is setup for success. Before all is said and done, don’t be surprised if Augustine and Salomane continue their excellent play and find themselves continuing to be awarded with many weekly honors. The future looks bright for the Mercy Mavericks women’s basketball team.