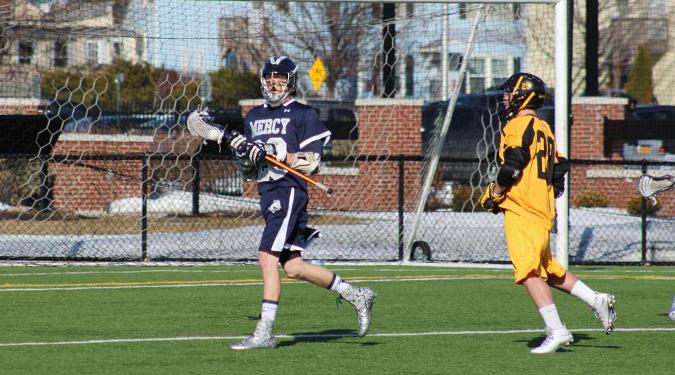 After posting a 4-3 record in the conference last season and finishing in third place, The Mercy College men’s lacrosse team seemed to be on track and heading in the right direction. Somewhere along the line, the Mavericks derailed. With an overall record of 8-5, the Mavericks conference record is dismal. Mercy looks to end the season strong and hopefully make a push and be selected for the NCAA Division II championship. But they have some work to do.

After starting April off with a win against Post University, the Mavericks seemed ready for their next few games, which were important conference games against the University of District of Columbia, Dowling and Roberts Wesleyan. In the win, junior Jesse Wood accumulated a career high 10 points. Wood scored six goals and made four assists, including the game-winner by junior Zack, to extend Wood’s NCAA Division II lead in points per game. The Mavericks had a 10-4 lead heading into halftime, and increased the lead to 15-5. Although Post tried to retaliate, Mercy proved to be the better after ending the game with a late score and defeating Post 16-7.

Mercy’s next game would be a home game against conference rivals The University of District of Columbia. In this ECC matchup the University of District of Columbia would come out ready to play and struck first, scoring a goal within the first four minutes of the game. Mercy freshman Daniel Spiecher quickly countered that by scoring a goal as well. Mercy then took a 4-2 lead as the first quarter ended. The momentum suddenly shifted as District of Columbia scored a quick three goals to take a 5-4 lead, which they would take with them into halftime. District of Columbia then outscored Mercy 3-1 in the third quarter to take an 8-5 lead going into the final quarter. Graduate student Kevin Glueckert sparked up a fourth quarter rally as he scored on an unassisted goal in only 57 seconds into the quarter. Freshman Chris Lopez scored on a rocket of a shot to score and pull the Mavericks within 1. Unfortunately, Mercy was unable to score any more goals, despite creating great opportunities, and lost the game 8-7.

After the tough loss to UDC the Mavericks were scheduled to play conference powerhouse Dowling College, who is also ranked 4th in the nation.  In a game that seemed very obtainable to win, the Mavericks fell short once again, losing to Dowling by a final score of 11-8.  Junior Jesse Wood had a game high 4 points as he scored 1 goal and assisted on 3 other goals by the Mavericks.  At the end of the first quarter, the Mavericks seemed to be lost as they found themselves down 6-0, but a second quarter scoring outburst for Mercy narrowed the deficit to 2 goals at halftime.  Sophomore Connor McLachlan and senior Ryan Elfeld each scored 2 goals for the Mavericks.  This loss was the 5th one in conference play this season for the Mavericks as they have been unable to produce a win in  the conference.

With the season looking hopeless, and Mercy at risk of going winless in the conference this season the Mavericks had to travel up to Rochester, NY to face off against another conference foe in Roberts Wesleyan.  This game was different than any other conference game the team played this season.  The team looked like they were running on all cylinders.  Junior Jesse Wood scored 4 goals while tallying up 3 assists, while junior Zach Haun chipped in with 2 goals and an assist, as Mercy went on to a 10-7 victory, capturing their first conference win this season.  It was a back and fourth game as the 2 teams saw themselves knotted at 7 points a piece to end the 3rd quarter.  The Mavericks stepped up big shutting out Roberts Wesleyan in the 4th quarter, while tacking on 3 goals to their own score.  This was definitely a huge win for the Mavericks as only 3 more games remain on the schedule, 2 of them being conference games.