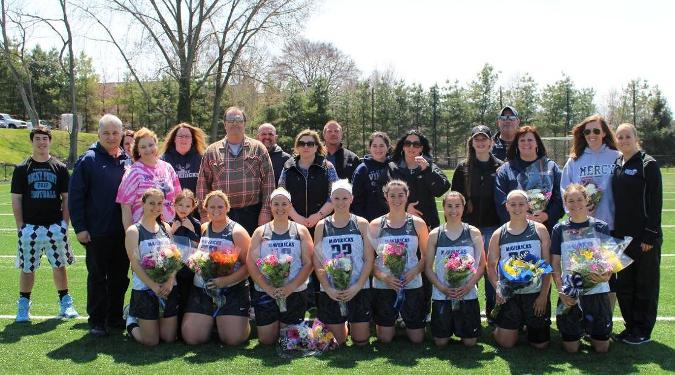 The 2014 campaign for the Mercy Mavericks Women’s lacrosse team has been like  roller coaster.

The season started off with intense action right away for the Mavericks as they lost two games by a combined score of just three goals, losing one game 10-8, and the other game 10-9. After those two games, Mercy went on to drop the next two games as well, which started them with a record of 0-4. But the Mavericks fought back hard, and have gone 6-5 up to this point since losing that fourth game very early on in the season.

One of the Mavericks biggest wins of the season came against Fort Lewis, where the game was played at Regis University in Denver , Colorado. The game would go back and forth all day long, with both teams trading goals. Mercy was able to net four goals in the first half, but so was Fort Lewis. The second was much of the same. Both teams once again netted four goals, which meant overtime would have to determine the winner of this intense battle. In the first overtime, sophomore Nicole Augustine was able to find the back of the net for a goal assisted by Senior Tracey Wandle. With the Mavericks up by a goal heading into the second overtime period, Junior Meg McNally was able to seal the deal for the Mavericks scoring an unassisted goal to give the Mavericks the 10-8 victory over Fort Lewis. This was a huge win for the Mavericks.

An impressive thing about the Mavericks is that there is not just one player who does everything on the field, in fact, it is quite the opposite. The Mavericks have seven players with over ten goals so far on the season. Senior Kelsey Bub leads the team with 28, Nicole Augustine has 19, Junior Michelle Tiernan has 17, Junior Marissa Kluber has 13, Senior Kristen Znaniecki has 13, Junior Nicole Kline has 11, and Tracey Wandle has netted ten goals on the year. The ability for many players to score is a big advantage for the Mavericks with the defense not able to focus on just solely one player on the offensive side of the ball.

It is hard to ignore what Senior Kelsey Bub has done this season for the Mavericks. Bub leads the team in many statistical categories, and has started all fifteen games for the Mavericks. Bub has netted an impressive 28 goals this season on just 73 shot attempts, giving her a shot percentage of just below .400. While Bub does a lot of the scoring, she is also third on the team in assists with ten, which shows her ability to get her teammates involved in the scoring just as easily as it is for her to score.  All in all on the season, Bub leads the Mavericks with 38 total points, which is a very impressive number with two games still to play.

With two more games left on the season for the Mavericks, they will be looking to finish the regular season strong and finish off with two wins which would give them a record of 8-9 overall on the season. The Mavericks really missed their home field this season. While the team is 4-3 at home, they went just 1-6 in away games, a number they will certainly look back on and wish things had gone differently in those road affairs.