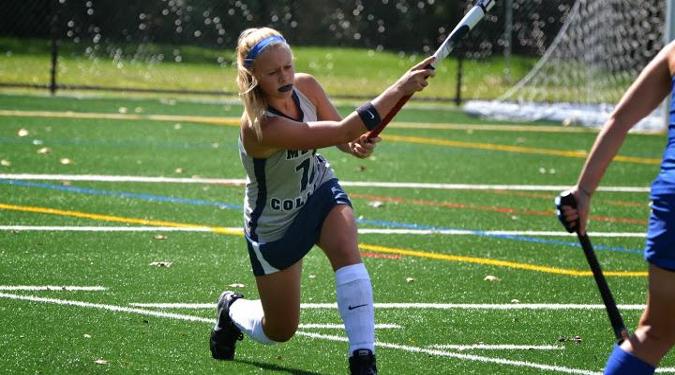 Head Coach Kayte Kinsley continues to build the Mercy College field hockey program piece by piece as the 2014 campaign begins. The fifth-year coach has seen the program mature quickly since its inception and is looking to take another step forward this season.

“The last four years have been a rollercoaster with a lot of learning experience in between,” Kinsley said. “I am not the same person I was four years ago when I inherited this program, and it shows in the outcome.”

The 2014 squad must replace the loss of five key starters, including All-ISA First Team selection Nicole Bencsik.  Coach Kinsley signed five newcomers in the offseason to help balance the squad, which returns several significant pieces from the past few years.
Forwards

Ballin will be the primary scoring option after tying for the team lead in scoring as just a freshman.  Senior Giana Magosin (Pleasantville, N.J. / Egg Harbor Township) will provide leadership up front, as she brings the most experience to Coach Kinsley’s system at the forward spot.

Senior Marissa Kluber (Wading River, N.Y. / Shoreham-Wading River) will be an asset when she returns from an injury suffered during the lacrosse season. Sophomore Vanessa Soler (Port Monmouth, N.J. / Middletown North) will fight for time at a forward spot along with sophomore Olivia Anderson (Port Washington, N.Y. / Paul D. Schreiber); both learned a lot from the sideline in 2013.

Freshman Kimberly Sands (Bethel, Conn. / Immaculate) earned All-State First Team honors in Connecticut, and will bring her intelligence and eagerness to win to the field.