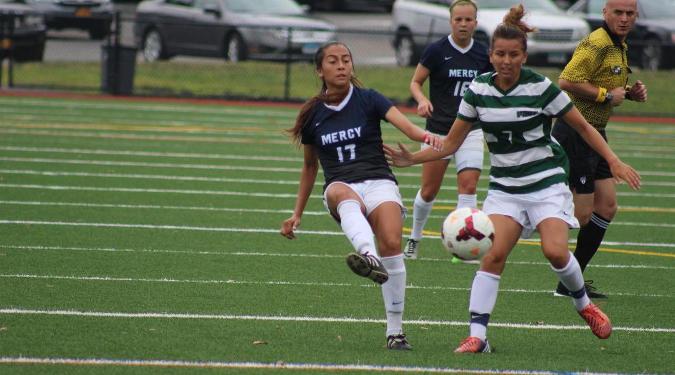 Freshman Heidi Serna bookended her evening by scoring the first and last goals as the Mercy College women’s soccer team defeated the Bears of Bloomfield College, 5-0.

The Mavericks improve to 6-1 overall, while the Bears remain winless at 0-6.

The defending East Coast Conference Rookie of the Week continued her stellar play as she scored the first goal of the evening off an assist from junior Jessica DeLeon. The Mavericks made Bears goalkeeper Diana Vincentini work in the first half, forcing eight saves on 14 shots. Serna’s goal would remain the difference as Mercy led 1-0 at halftime.

Mercy has built a reputation as a strong second half team, and once again dominated after the break as the Mavericks put on a clinic in the latter 45 minutes. Senior MacKenzie Cochrane struck first as she scored just five minutes into the half to take a 2-0 lead in the 50th minute.

For Mercy, DeLeon finished with three points on three assists, while the team totaled 24 shots, including 17 on goal. Junior Nicole Augustine made two saves in 45 minutes of work, while freshman Ashley Price made her collegiate debut in goal and finished the game for the Mavericks.

Head Coach Jonathan Feinstein and the Mavericks return to action on Saturday, Sept. 27, as they will host the defending ECC champion No. 17 Purple Knights of the University of Bridgeport at 12:00 p.m.