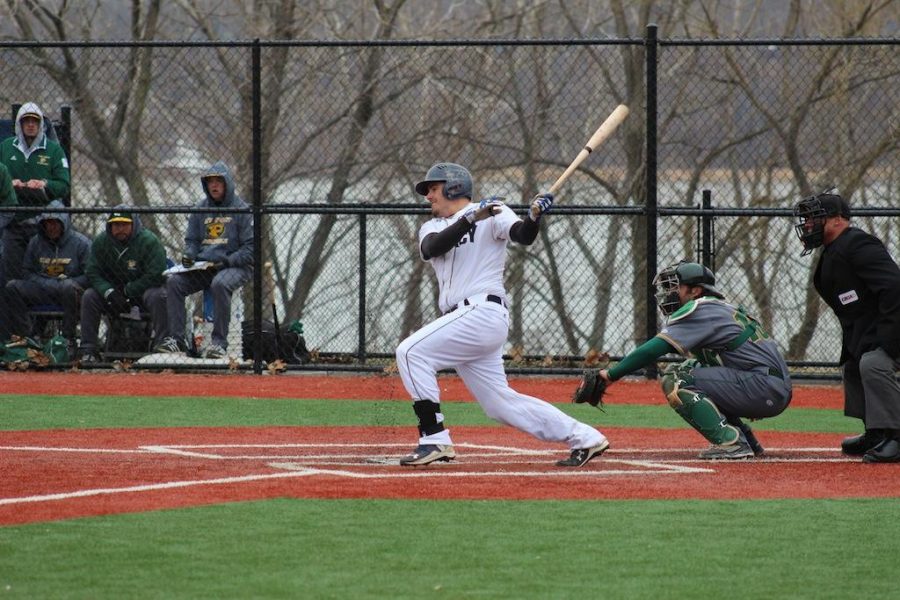 Members of the baseball team came back to school in the fall unsure about who their coach would be. For returning seniors Bryan Greig and Sal Palumbo, it was just another bump on their road.

Yet bumps in the road are not a new thing to members on this team. Bad luck seemed to follow Greig on his road to this senior season.

Greig started off playing as a child in elementary school. His parents had signed him up for all types of sports. Baseball and football were among his favorites. So he stuck with them all throughout high school. Even earning himself All-Section Player of the year at one point.

When it came time to pick colleges, Greig was looking for an opportunity to play football somewhere. He got looks and offers from schools such as Stony Brook, Cortland and even Rutgers.

Unfortunately, his grades prevented him from getting into the school. He then looked at opportunities to play elsewhere. His mother was an administrator at Mercy and knew the former coach.

“I wanted to play football, but I did want to get looks to do something after I was done with my college career and my best chance at that would be baseball,” Greig says about settling on baseball.

Coming in his freshman year his grades were not where they needed to be to play.

Although he tried to get himself on the field for scrimmages, he and his coach both knew he couldn’t actually play. He had to red-shirt that freshman season.

Greig remembers his first season as a Maverick: “It might have been the best team Mercy has ever had and it was frustrated to not be able to play with them.”

The team didn’t make playoffs that year, which motivated Greig even more to work harder in the off season. He trained hard in the fall semester and then that winter ready to come back and lead his team to the East Coast Conference playoffs.

But another bump was about to hit for Greig.

Two weeks before the season started, he broke his leg while working out preparing for the season ahead.

He wasn’t able to redshirt that season, and was finally able to play and start in his last five games of the season. It seemed like a repeat season for the Mavericks not making playoffs again. Missing by only one game.

And Greig left with the same mentality as he did last season.

Sal Palumbo, the senior catcher, had a similar start. His parents signed him up for sports as a youth but it was apparent once he started tee ball  that once he picked up a glove, he would never put it down.

He played football and basketball along with baseball until his freshman year in high school. Wanting to play in college, he decided to solely focus on baseball .

When deciding on schools, he didn’t get as many looks as he would have, liked but he knew he wanted to get off Long Island where he grew up. He found Mercy. At that point he could only come on as a walk on. But he was determined to earn his spot.

“My dad and I would go to the batting cages in the summer to practice swinging until my hands were blistering.”

The first year for Palumbo was a learning experience in which he was up for anything. He was doing everything right and listening to anything his coach had told him to do.

“I would’ve swam across the Hudson that year if coach had told me to,” Palumbo says with a smile.

He didn’t start off seeing the playing time he had hoped for that year. But he continued working hard to see the field, which eventually paid off.

He began splitting time with the catcher who was a senior his freshman year. Then eventually he began starting. And improving ever since.

After three years of not making the East Coast Conference Playoffs, both seniors are ready to make this their year to make it in.

“We need to be fourth seeded to make it in,” Greig says about the playoffs, focuses on what the long season in front of him.

And the fight for that fourth spot will not be easy.

Currently the Mavericks are 3-13 in the conference. And their chances are dwindling down. But there is still a glisten of hope somewhere out there for them to make the playoffs.

Palumbo knows the chances saying, “I hope we can do it somehow. Either way we’re going to finish strong.”

As for next year, Greig is hoping to get picked up by a team. Playing ball is life, they say, and there’s too much ball left in him to want to hang up those cleats. It’s the attitude of the entire baseball team actually. Despite the slow start, one win and turn into two, and a streak can be born. The Mavs will need it extend the season, and the seniors dreams of not taking of those gloves, for just a little bit longer.