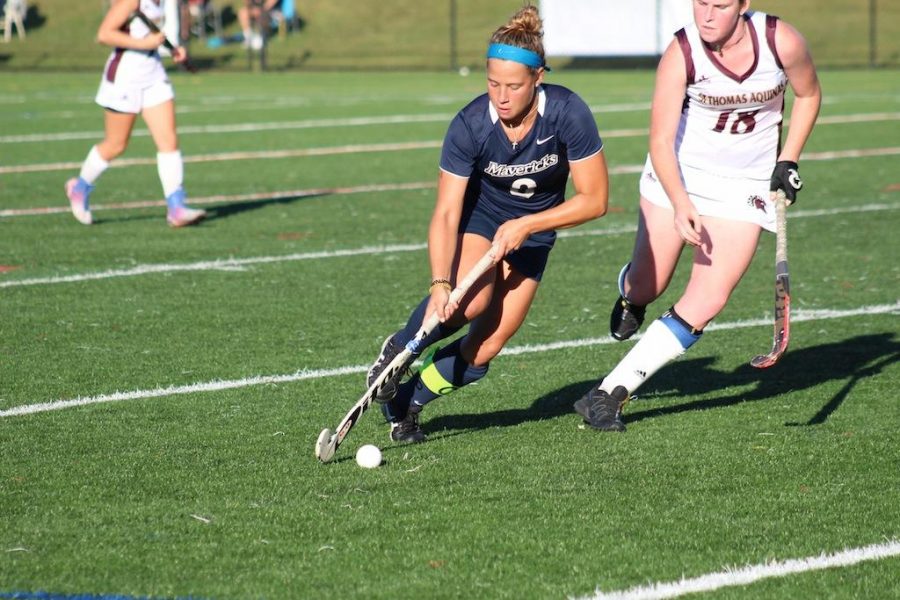 Electrified by a career-high two goals from sophomore Angela Robbins, the Lady Mavericks rang in a 3-1 victory against Newberry during their last day of regular season. This win quickly pushed the young team to the ECAC Division II Field Hockey League Tournament, for the first time ever.

Ranking as the No. 4 seed, the Lady Mavs were ready to fight as they faced off No. 1 seed Lindenwood, Friday, Nov. 4.

As early as the seventh minute of the game, Lindenwood took a shot, but goalie Cheradyn Pettit made a quick save, and once again in the 12th minute.

At 18:01, sophomore Alicia Williams shot a goal but was stopped by Lindenwood’s goalie. Senior Vanessa Soler took a shot at 18:37, but was blocked.

Trying to keep up their fight, at 19:03, sophomore Robbins took her shot when she saw it, but it was no match as the goalie saved it.

At the 32:10 marker, a shot by Lindenwood hit the post, and led to a foul on Mercy. Four seconds later, a goal by the favorites as it made as the ball made it past Pettit.

The Lady Mavs saw half time as 1-0, and hoped they would get back the fire they had to get them into the tournament.

Nine minutes later, the game would be 3-0. With shots being taken, Pettit made a total of 11 saves, as she preserved the next 21 minutes to help her team score, but it did not end that way.

The Lady Mavs lost, but went on to their next game to see who placed third, as they faced off against No. 2 seed, Bellarmine.

Nearly four minutes later, Soler received a pass from senior Jackie Ballin and fired the ball from the top of the circle into the cage to make it 3-1.

It was Soler’s fourth goal of the season, while Ballin notched her team-leading sixth assist of the year.

At half time, the Mavs hoped they could bring the fight back out there to bring home a win, but no time was wasted. Three minutes and 39 seconds into the first half, Bellarmine scored twice, making the game 5-1.

With only ten minutes left in the game, the No. 2 seed succeeded with three more goals, ending the game with 8-1, another loss for the Lady Mavericks.

The young field hockey team ended their 2016-2017 season on a high note, regardless of the two losses. Not only did it make its first appearance in the ECAC Tournament, but it ended the season with the most wins the program has since their start with a standing of 7-13.