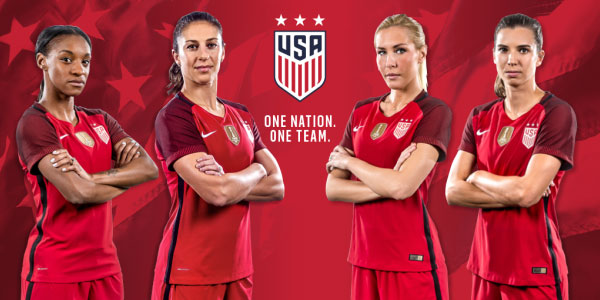 Gender discrimination has become a major topic within United States sports. Five top players from the United States Women’s National Soccer Team filed a discrimination complaint with the Equal Employment Opportunity Commission; accusing the U.S. Soccer Federation of paying them a quarter of what their male counterparts receive.

“If you look at the success over the past years, there is no question that the  US Women have had far more success compared to the men. You should be rewarded for your success,” said Sharpe.

Sharp is right when she says this. The USWNT has been the dominant team for the united states the past 17 years. Just look at the stats.

“Certainly there is legitimacy to the US Women feeling like they have been discriminated against compared to the US Men,” said Sharpe.

In an article written by The Guardian, Morgan feels that this issue is theirs to bring up and bring attention to.

“To force a change sometimes you need to stand up. You know what you’re worth – rather than what your employer is paying you. We’re not scared. To move the women’s game ahead we need to do what’s necessary. I feel other national teams are looking at us for that guidance.”

When looking at the numbers, it seems clear that the women’s team is being treated unfairly. The recent controversy and argument back at the USWNT is that the USMNT brings in more revenue.

“If you look at the world stage, obviously yes the Men’s World Cup brings in more money than the Women’s, so from a business standpoint you have to respect that,” said Sharpe. “But if you look at the microcomp of the US Soccer, it’s really not that the US Men bring in more revenue than the US Women do.”

According to US Soccer numbers, in 2015, after the USWNT won the World Cup, the team went out on a 10 city victory tour which resulted in an eight figure jump for the US Soccer Federation. The women brought in more than 23 million in game revenue. That year, the USWNT turned a profit of $6.6 million for U.S. Soccer whereas the men’s team brought in a profit less than $2 million.

Looking ahead, the U.S. Soccer Federation predicts that the women’s team will profit more than $5 million with the hope of another gold medal where the men’s team is projected to lose about $1 million this year.

With the partnership between television stations and sponsorships from companies like ESPN, Nike, Fox Sports, the Men’s National team is bound to bring in more numbers than the women’s team.

Many would argue still that the males brings in more revenue and fans. However, most people forget that every game for the USMNT is televised on either ESPN, Fox, CBS or another popular television provider. It wasn’t until this year that the USWNT has had a television station broadcast every one of their games. Certainly the men’s team will bring in more money if more people have the chance to watch their games.

The inequality doesn’t just fall with the national teams.  This reigns true for the professional soccer world as well. For the women’s side, the National Women’s Soccer League (NWSL) was finally established in 2013. It wasn’t until this year, February 2017, that the NWSL landed a partnership with Lifetime TV. On the men’s side, every match is shown on ESPN television – a more popular sports channel than Lifetime TV.

It’s hard for players coming out of college and hoping to play professionally. One, there are many options, and two, being a professional player isn’t what the ideal “professional” experience should be like.

“Many professional players have to live with host families to be able to make ends meet. Unfortunately, the pay a massive barrier. It isn’t exactly the professional athlete experience that you would expect,” added Sharpe.

Sharpe mentioned how it is almost better to take a job coaching as an athlete or take a job outside of playing.

“I’ve known many players who have been drafted to play in the NWSL and it’s very exciting for them but financially they would be better off taking a coaching job at a soccer club rather than playing professionally. It’s sad.”

Due to the limited options here, many players are choosing to take their talents elsewhere.

“You now see American players going overseas to play because there isn’t enough options or pay to stay here and play.”

The US Soccer Federation has started putting more money into the NWSL with the expansion of one more team this year, 2017. The hope is to build a program as big as the MLS, but it doesn’t look plausible in the near future.

“It’s good that the federation is starting to be a little more involved and growing a little bit, but the bottom line is that they still need more money to go to the players to really be sustainable.”

In a tribune posted on The Players Tribune, the USWNT put their pen to paper and made their fight for equality noticible.

“At the end of the day, we expect to be treated equally as our male counterparts.”