Mavericks Hope for Championship Behind MacSpadyen 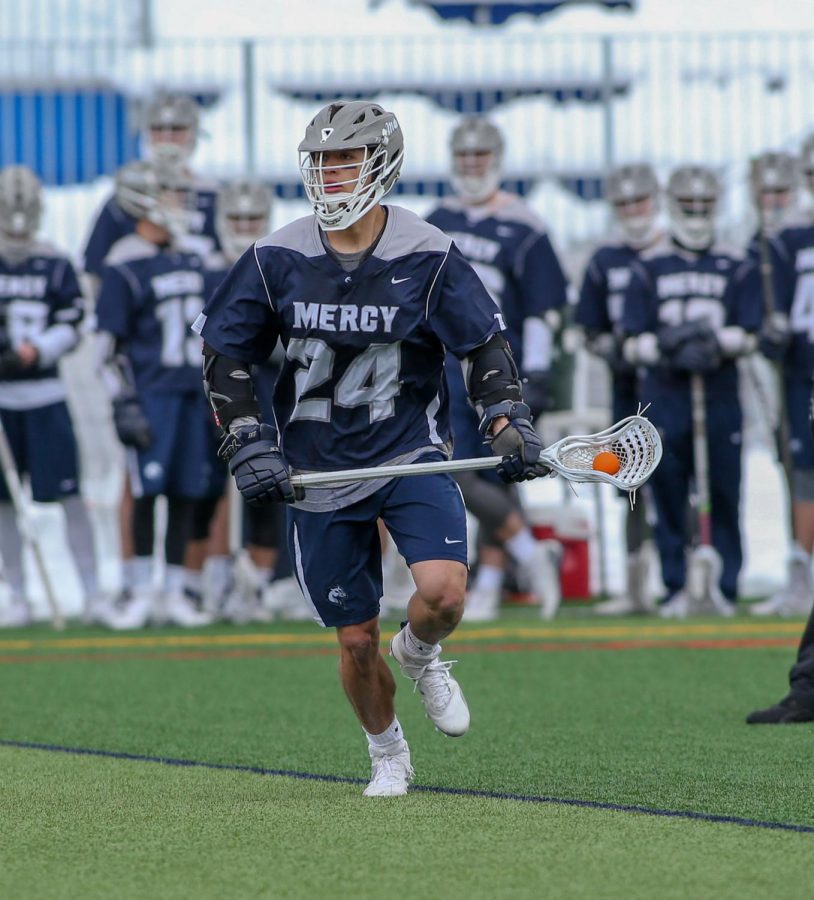 The Mercy College men’s lacrosse team is off to a strong start to their 2018 season. Coming in at 6-1 on the season and ranked No. 15 nationally, the Mavericks have high hopes of post season play.

Leading the Mavericks is junior Ryan MacSpadyen. Born and raised in Canada, Ryan has been playing lacrosse since a very young age.

“I think I picked up a lacrosse stick around 3 years old,” said MacSpadyen. “However, playing with a team I started around age 5.”

MacSpadyen was exposed to two sports at a young age: hockey and lacrosse. With both sports being a big part of his life, MacSpadyen fell in love with both of them.

“In my town, you played hockey in the winter and lacrosse in the summer. It was just how my area worked. There wasn’t any soccer or baseball, it was hockey and lacrosse.”

Having a father who played both sports, MacSpadyen had a great role model and coach. However, with his father playing lacrosse for Team Canada, it was obvious that lacrosse was going to be a big part of MacSpadyen life.

“My dad passed the game down to me, all of his traditions and tricks,” said MacSpadyen. “He cut my first stick down for me and taught me everything.”

Having a passion for two different sports is hard when it comes to choosing which one to focus on. However, for MacSpadyen, it came down to which sport he was introduced to first: lacrosse.

When it came to playing in college, Mercy secured a star in MacSpadyen due to a friendship between current head coach, Jordan Levine, and MacSpadyen’s Junior’s coach.

“My old coach in Juniors was best friends with Coach Levine, and he got me connected with him,” said MacSpadyen. “I came down here for a visit and I loved the smaller setting that this school brings. It just fit for me.”

Having been to New York City a few times before, MacSpadyen loved the proximity of Mercy to NYC. He wasn’t in Canada anymore.

The team and the atmosphere here at Mercy has played a big role in MacSpadyen’s success here.

“I came here not knowing anyone, and now I have a ton of friends and teammates who I love and respect,” said MacSpadyen. “The support they give me not just with athletics but with academics too has been incredible.”

Already with 14 goals, 10 assists and 24 points overall, MacSpadyen has become a vital part of the Mavericks lacrosse team. MacSpadyen is focused on making this year a championship year.

“Our goal this year is the East Coast Conference Championship and taking number one. We aren’t thinking much farther than that right now.”

When it comes to challenges, the Mavericks have one they are still focusing on.

“Our biggest challenge is finding our identity,” said MacSpadyen. “We have been working towards that the first five or six games here, but I feel like we still haven’t found it yet. We just gotta keep pushing and keep working harder and it will come.”

“We are gearing up towards proving ourselves on the national stage.”

MacSpadyen and the rest of the Mavericks have that chance on April 14 and 28 when they face New York Institute of Technology and LIU Post University who are both currently ranked in the NCAA USILA Coaches top 20.

Junior goalkeeper Ryan Gibbons has 66 saves on the year with a save percentage of .641, and sophomore Antonio Rey leads the team in ground balls with 21, and has a face off percentage of .683.

The Mavericks next game at home is on April 7 at 2 p.m. on Mercy Field as head coach Jordan Levine and the Mavericks face University of The District of Columbia.