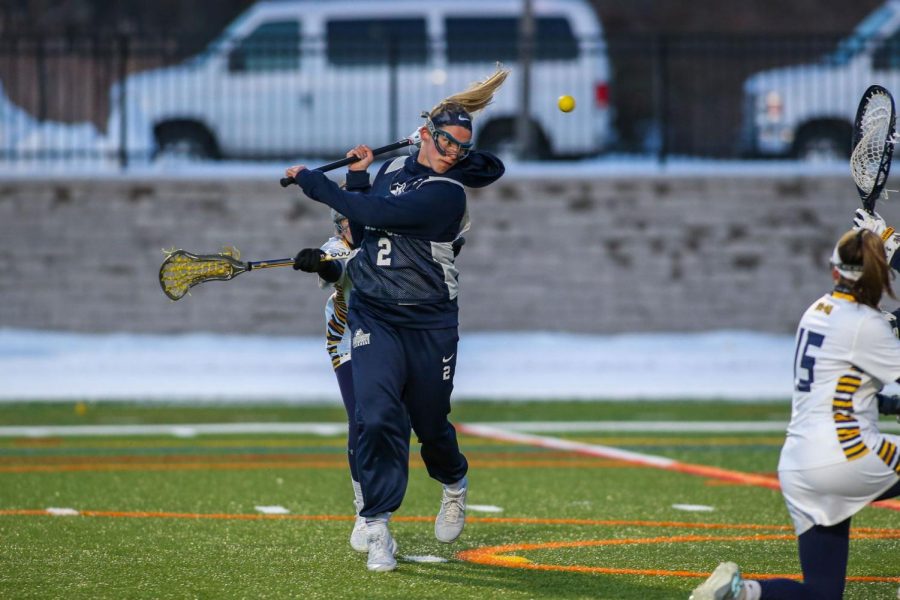 Mavericks senior midfielder Hunter Isnardi scored a game-high six goals as the women’s lacrosse team won their first game of the season coming back from a five-goal deficit against Merrimack College on the road to improve to 1-0 to start the season of the seventh consecutive year.

Mercy trailed by as much as five late in the game before Isnardi put on a career performance.

The Mavericks quickly fell behind 2-0 before Isnardi first got on the board with a goal to cut the deficit to 2-1 with 20 minutes left in the first half.

After scoring their first goal of the game, the Warriors responded by scoring four straight goals in a span of four minutes to jump out to a 6-1 lead with 16 minutes remaining in the half.

At the end of the first half, the Mavericks headed to break trailing by four with junior attacker Katherine Sanchez leading the team with 2 first half goals.

As the second half got underway, the Mavericks trailed by five again as the Warriors scored another goal within the first three minutes to increase their lead to 9-4. This was the third different time in the game that Mavericks where trailing by five. It appeared as if  Merrimack was as going to pull away for good, but the Mavericks had other plans in mind.

The Mavericks would go on to score three straight goals, two of which came from Isnardi got the Mavericks right back in the game cutting the five-goal deficit down to three with just over 18  minutes left in the game. This was followed by Merrimack goal to make increase the lead back to three before Mercy quickly responded with two goals of their own coming Isnardi as well as sophomore attacker Casey Shimbroske to make it a one-goal game, the closest it had been since the score was 2-1 early in the first half.

Every time it appeared as if the Mavericks were going to get over the hump and tie the game, the Warriors always seemed to have an answer. Merrimack scored a goal to push the lead back to two, but the Mavericks would once again have a response.

With their backs against the wall and the Mavericks staring a 0-1 start in the face, they responded with four straight goals to grab a two-goal lead with just under five minutes remaining in the game.

The rally started with two goals by Isnardi to give her her fifth and sixth goals of the game to tie the score at 11 all. This was followed by two more goals scored one of which cam from Katherine Sanchez to give her her third goal of the game which helped put the Mavericks up by two.

Merrimack would make it a one-goal game with 1:33 remaining, but the Mavericks defense kept Merrimack off the board the rest of the way to complete the comeback and secure the win.

Isnardi finished the game scoring six of the Mavs thirteen goals scoring five of them in the second half and  going 3-of-5 on free-position shots.

The Lady Mavericks will look to improve to 2-0 on the season when they take on Saint Anselm on the road on Saturday, February 23rd at 11 a.m.