Lady Mavericks win their home opener to improve to 3-0 to start the season. 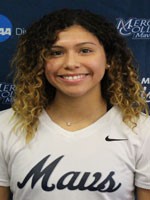 Led by four goals from junior attacker Katherine Sanchez and three goals from senior midfielder Hunter Isnardi, the Mercy Mavericks Women’s lacrosse team improved to 3-0 after defeating New Haven by a score of 12-8 on Feb. 27 to win their home opener.

The Mavericks have now started 3-0 for the fourth consecutive year and defeated the Chargers for the first time in program history.

The first nearly six minutes of the game saw neither team score a single goal until Isnardi broke the scoreless tie to give the Mavericks a 1-0 lead.

The game was quickly tied again as the Chargers responded with a goal of their own just over a minute later.

Sanchez scored consecutive goals to give the Mavericks a 3-1 lead mid way through the first half. Her third goal came with 10:30 left in the half.

The Mavericks entered the break with an 8-3 lead with Isnardi and Sanchez leading the way scoring a combined five goals.

After maintaining a five goal lead to start the third, the lead was cut to three by the Chargers with twenty-one  minutes left in the half, but Isnardi made it a four score game again when she scored her third goal of the game to make it 11-7.

Once again the Chargers would cut it to three but that was the closest they would come as the Mavericks scored one last goal and went on to win by a final score of 12-8 to give them a win in their first home game of the season.

Sanchez and Isnardi led the way with a combined seven goals and the Mavericks also got two goals and an assist from sophomore attacker Casey Shimborske.

The Mavericks will look to improve to 4-0 when they take on Southern New Hampshire University on Saturday March. 2.