Three players drive in runs, but Mavericks come up short against Bridgeport. 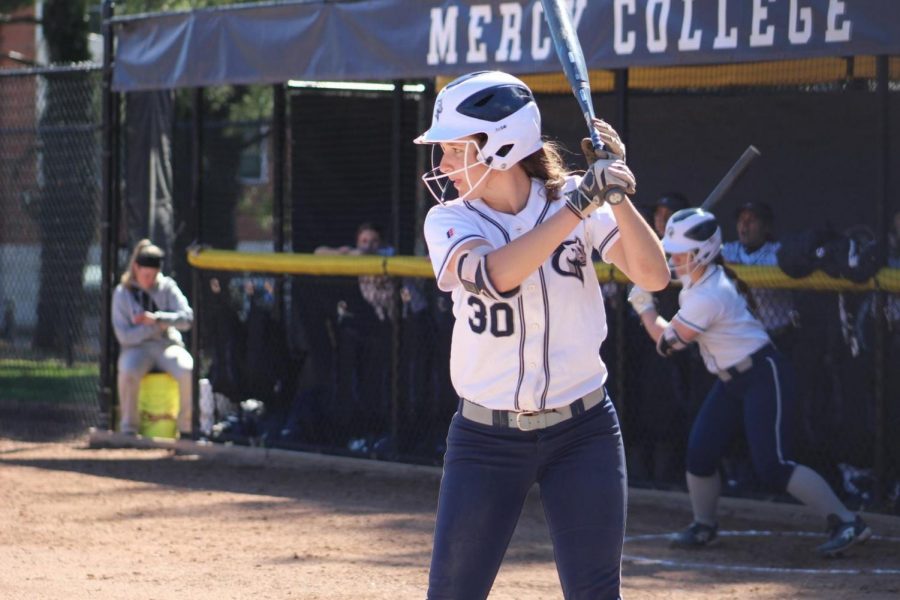 Despite three Mavericks recording an RBI against Bridgeport, the Mavs fell short dropping both games in the double header on April 24.

After falling behind 4-0 in the top of the first inning, the Mavericks answered back with two runs of their own in the bottom of the first to make it a 4-2 game. Senior centerfielder Mikayla Newham singled and advanced to second on a passed ball. After a walk from freshman catcher Alexis Crawford Newham advanced to third on a wild pitch. With the bases loaded after a walk from sophomore first and second baseman Hannah Mueller, senior pitcher and first baseman Kaylee Stevens came to the plate with the bases loaded. Stevens hit a two-run double to right field getting the Mavericks back within two runs.

Despite the effort from the Mavericks ,the Purple Knights pulled away scoring two runs in the second, one run in both the third and fourth inning and two in the fifth to earn a 10-2 victory over the Mavs.

Mercy was led by Stevens and Newham who each went 2-for-3. Stevens also pitched four innings giving up four earned runs to take the loss in game one of the double-header.

Game two saw the Mavericks continue to show their fight against Bridgeport. After falling behind 2-0 in the top of the first, the Mavericks followed it up with two runs in the bottom of the first to tie game 2-2.

The Mavericks were held scoreless the rest of the way and Bridgeport scored runs in the third, fourth and sixth innings to defeat the Mavericks by a score of 6-2 in game two of the double-header.

Stevens went 2-for-3 giving her a total of four hits on the day and Mueller and DiGiacinto each went 1-for-3 with an RBI. Senior Raina Gorman pitch six innings allowing five earned runs to take the loss.

The Mavericks will look to end the two game skid when they take on St. Thomas Aquinas on Thursday, April 25 at 2:30 p.m.