A Horse with No Name: The Secret History of Mercy’s Mascot 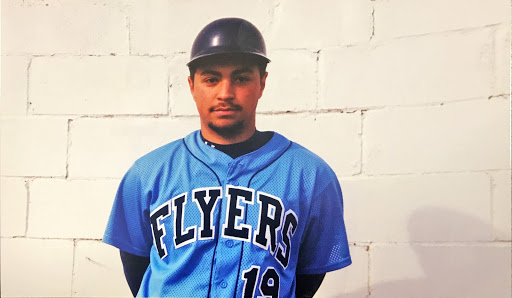 “What’s in a name? That which we call a rose

By any other word would smell as sweet.”

One can assume that Juliet Capulet was not talking about Mercy College during her famous lines from the play of her own namesake, Romeo and Juliet. Regardless, the words written by Shakespeare still carry true significance in 2019.

But he said nothing about nicknames. 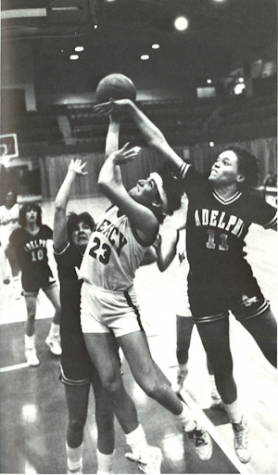 It doesn’t take a lot for one to realize how important a nickname can be for a school. Look around at Mercy itself, it won’t take long to see the “Mavericks” moniker pushed throughout campus. Though these nicknames are for athletics, they can become battle cries too, something that the student body itself can rally around. A name is only a set of letters, but once a group of people puts their hearts into it, it becomes more than a word.

Despite the prominence of the Maverick nickname now, one should note that this hasn’t always been the mascot of Mercy College. In fact, even though the school is young itself, the Maverick name is even younger, only dating back to 2007.

There was a time when the school went under a different nickname that seems lost in time. There isn’t an official logo, and there were barely any documents of its existence, and many never even knew how it was chosen.

Before the school became home to the Mavericks, Mercy College rooted for the same teams, but under another nickname: the Flyers.

To get the true story of Mercy’s nickname, and of the athletic history, we have to go back to the early 1960s.

Though the school was established in 1950, it didn’t open for students until 1961, when Mercy became an all women’s institution. Although an exact year isn’t known for sure, it was around this time that the first athletic club began with cheerleading.

Very early on, there was an issue with this team: they had no Mercy teams to cheer for. Instead, they cheered for Iona College in the early 1960s.

The first competitive team would debut for Mercy on Dec. 4, 1963, when the women’s basketball team took the court for the first time against Dominican, where they’d win 49-10. 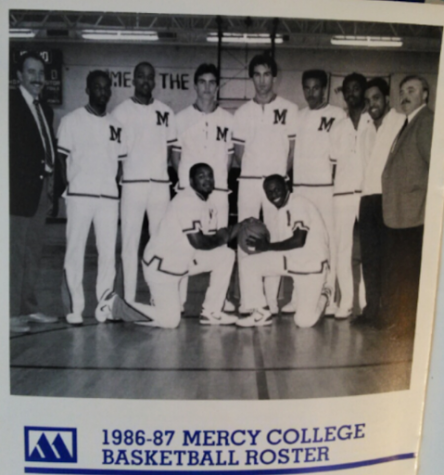 Donning the famous blue and white that is still worn to this day, everything looked great. Except for one glaring issue: the school didn’t have a nickname. For reasons that will more than likely forever be unknown, the school just went by ‘Mercy College’ for the beginning of its tenure.

The year is 1969. Led Zeppelin released their debut album, Richard Nixon was sworn in as the 37th President of the United States, and for the first time, a human walked on the moon.

Back in Dobbs Ferry, men were welcomed to attend Mercy College.

Through this influx in males came Neil Judge. Hearing of the school through his now wife’s older cousin, the Vice President of Academic Affairs, he was asked to teach.

The decision to bring in Judge would revolutionize Mercy athletics forever. But first, he would serve two years as only a gym teacher. However, it wouldn’t take long for this to change.

“The only sport we had at the time was women’s basketball, but since more males came, students wanted more sports.”

These wishes were quickly granted, as, in 1970, the men’s basketball team would become the second competitive team at Mercy, who also were coached by Judge.

From the moment he arrived, the list of roles he held at the school only grew larger. He would not only go on to coach both basketball teams and the baseball team, but in 1971, he would be named the school’s first Athletic Director. He would hold this title until his retirement in 2005. 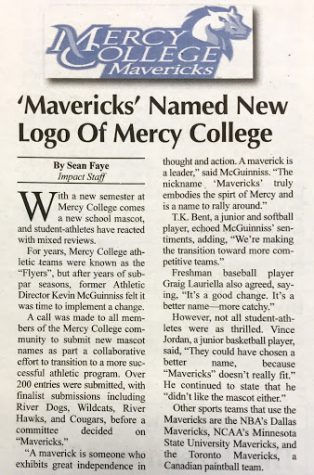 After Judge became the school’s AD, Mercy would adopt the Flyer nickname the following year. As for the exact details, it has never been documented previously. But as Judge revealed, the story of the name originates well beyond the reaches of Westchester.

The legend goes that one day in 1972, a group of four students gathered, intending to come up with a school nickname.

The group struggled to put anything together, until one student, Larry Novissimo, a recent transfer from the University of Dayton, in Ohio, suggested his previous school’s moniker of the “Flyers.”

With no better options offered, the group voted, and Mercy College soon became home to the Flyers.

But from the moment the name was selected, the school had struggled to ever accept it.

This isn’t to say that the school didn‘t try.

The reason why Dayton accepted the name was in honor of the Wright Brothers, who invented the airplane in Dayton. The connection to Dobbs Ferry and New York was unclear.

Sometime after the name decision was made, Mercy attempted to get Snoopy as the school’s mascot.

Yes, that Snoopy. Mercy reached and asked Charles M. Schulz, the creator of Charlie Brown and the iconic cartoon world, to seek permission, as Judge explained it.

“We wanted to have Snoopy as our mascot. So we contacted Schulz and asked, but he declined. He said ‘I’m sorry, but I’m not letting Snoopy go.’ One of our students had actually tried to ask him. We had all sorts of drawings of ready with Snoopy involved.”

From there, the school did not get the Flyer nickname to ever stick around with the student base.

Bill Sullivan, Mercy’s Senior Associate Director of Athletics/Internal Operations, explained that a large reason for the struggle came because of how serious Division II athletics were taken.

Division II athletics, for those unaware, sit under Division I on the NCAA pyramid. The difference between these tiers comes down to finances and facilities, hence the reason you don’t see Notre Dame, Ohio State, or even Syracuse, ever play Mercy College in a competitive event.

“Athletic branding wasn’t really a Division II thing during the time, but now we’re protective of our brand. It wasn’t until the 1990s that D2 athletics became more aggressive and went away from the recreational mentality.”

This was the reason the school never adopted an official logo for its athletic teams. Much of the branding was down to each team, which is why in many old Mercy baseball photos from the 90s and 2000s, one would see a Detroit Tigers-styled “M” and a light blue used for the jerseys that aren’t the blue used by teams now.

“We at one point unofficially adopted the eagle as the mascot for the Flyers, but it could’ve been because of [Dobbs Ferry High School]. We even had a drawing of this big, muscled up eagle, but it never picked up.”

From the Flyers to the Mavericks

Following the retirement of Judge in 2005, Dr. Kevin T. McGinniss became Mercy’s second ever AD. This came after a tenure at Quinnipiac University.

With the hiring of McGinniss, a new start was believed to be needed.

Not that the Judge Era didn’t contain moments of greatness. Both the soccer and tennis (yes, Mercy had a tennis team) teams competed well on the field, but Judge was most proud of the near perfect graduation rate of student-athletes, “We graduated 92 percent of our athletes, even despite the NCAA counting transfer students against us. Some didn’t work out, but we took pride in what we accomplished.”

But with this new era taking place, McGinniss saw this as a good time to re-brand the school, according to Sullivan.

“He was the brainchild of the name change. He saw it as a change of direction for Mercy athletics.”

So the school picked a fresh identity. Starting in the Fall of 2006, surveys were given out to students, and from there, the top name choices were taken into consideration. After a period of giving in options, the final choices were announced: Mustangs, River Hawks, Cougars, Wildcats, and of course, Mavericks.

Eventually, the New Mascot/Nickname Committee made their choice. On May 15, 2007, in the Hudson View Café, the new logo and name were revealed to everyone.

“A maverick is someone who exhibits great independence in thought and action-a maverick is a leader, the nickname Mavericks truly embodies the spirit of Mercy College and Mercy College athletics. It’s a nickname that the entire Mercy community can be proud of and rally around.”

As Sullivan pointed out, from this moment, it became the goal of the athletic department to increase the quality of facilities and performances. While some alumni were upset about the name change, the new name received a positive response.

Twelve years later, and Mercy has accepted their new identity, according to Sullivan.

On May 9, 2007, the baseball team played its final game of the season. This was also the final time the Flyers nickname would ever follow a Mercy team.

As they won 9-2 over Queens College, it served not only as the last time the name would be used, but it signified the end of an era for Mercy College. No longer was this the school that used a snow fence for baseball games. Things were getting serious.

Whether it’s the million dollar Mavericks Field, the Final Four appearance for the women’s soccer team, or the renovation of Victory Hall’s athletic facilities, a new period is upon the school.

“Since 2007, we’ve seen the potential of Mercy move forward. If you saw the old field, you would be in awe, and not because of embarrassment, but of shock,” said Sullivan.

Judge summarizes the change of not only athletics, but of the same school that allowed him to meet his wife, and serve as his home away from home for 34 years.

“To see it grow from a tiny little college with 75 women in the first graduating class to 10,000 students was crazy. I was there for all the college extensions. I knew everybody, all the kids, the staff, it was just a great place to work. They’re doing much better with the facilities now.”

“We only had a field, and it took around five years to complete, but it used to be just a slope. They eventually made it into a garbage dump, and Mercy charged towns in Westchester to dump their garbage in the hole. After three and a half years, it was full. Then they added dirt and sodded it and it looked like a major league field with all the grass! Then a contractor warned us during the winter that a tree in center field could combust due to the garbage, which eventually happened.”

“There was all of this snow, then just a huge ring around this tree with steam coming out of it. I wish I had a camera, there are just so many stories to tell about this school.”