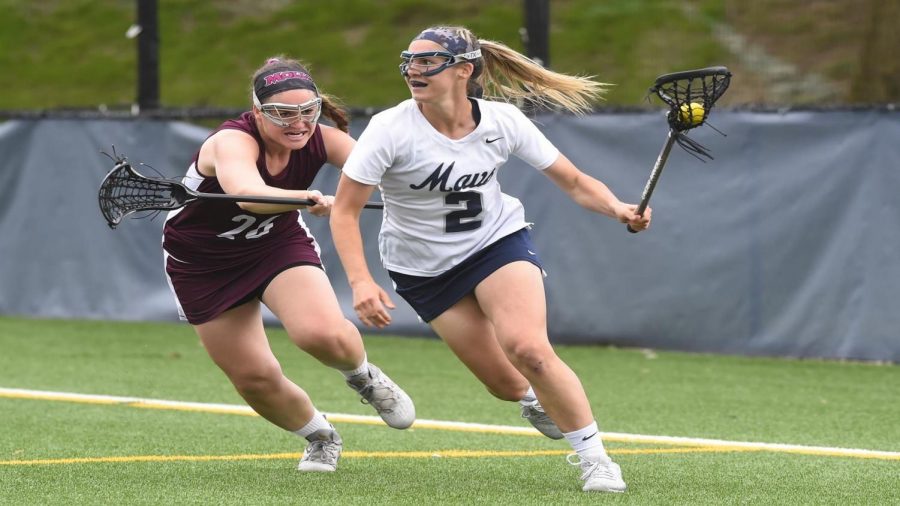 Senior midfielder Hunter Isnardi entered Thursday’s ECC semifinal game seven goals shy of setting the new record for goals scored in NCAA Division II with 301. That record was broken in the first half as the Mavericks defeated Molloy College 19-9 to advance to the ECC Championship game for a third consecutive year.

Isnardi needed just 75 games to break the record which was previously set by Katelyn of West Chester back in 2006 with 299 goals.

Isnardi’s record setting 300th career goal came with nine seconds remaining in the first half which put the Mavericks up 15-4 to cap off a dominant first half by the Mavericks.

The game saw the Mavericks trail 1-0 1:20 into the game before junior attacker Katherine Sanchez tied it up at 1-1 just under a minute later. Isnardi followed that up by scoring her first goal of the game to give the Mavs their first lead of the day just under three minutes into the game.

After Molloy tied at 2-2, the Mavericks answered back with four straight goals to jump out to a 6-2 lead. Sophomore attacker Case Shimborske contributed to the run by scoring 2 goals and the Mavs also got 1 goal from sophomore midfielder Briana Corace as well as Isnardi scoring her second goal of the game.

The Lions responded with a goal to make it 6-3 but once again the Mavericks went on a run to increase their lead. Mercy scored three straight goals from Corace and Sanchez to make it 9-3 midway through the first half.

Molloy made it 9-4 but the Mavericks closed the first half with a flourish by scoring six straight goals including the record breaker by Isnardi to give Mercy a 15-4 lead at the break. The run started with a goal from junior midfielder Brittani Sergio and was punctuated by five straight goals from Isnardi to give her a team leading 7 goals at halftime.

Despite a quite second half offensively from the Mavericks, the dominant first half proved to be too much for Molloy to overcome.

Briana Corace got the second half started by scoring her second goal of the game just under seven minutes in to give the Mavs their largest lead of the game at 16-4. The Lions followed with two straight goals to cut the deficit to ten, but that was as close they came in the second half.

Brittani Sergio scored her second goal of the game coming midway through the second half to push the lead back to eleven. Molloy would score three more goals on the day, but with Isnardi scoring career goal #301 and her eight goal of the day and defender Juliana Keenan adding a goal, the Mavericks went on to defeat Molloy 19-9 advancing to the ECC Championship game.

Overall it is the Mavericks sixth consecutive win on the season and fifth straight win over Molloy.