Aaron Denk Gracia Scored his First Goal of the Season in a Tough Loss. 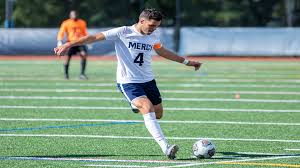 The Mavericks dropped a 2-1 double-overtime decision to ECC foe New York Tech on Saturday afternoon. Their four game winning streak has now ended as the Mavericks have lost their first ECC game of the year to the Bears.

Mercy is now 11-2-1 on the season and the Bears are 6-8. Defender Aaron Denk Gracia scored his first goal of the season and Senior Defender Gaston Rozenblum recorded his eighth assist which leads the ECC. Junior goal keeper Joel Serrano recorded one save despite the loss. The Bears  Bernd Schlüter had an efficient day recording two goals. Pol Zapata was busy as well recording 8 saves for the game.

The game was scoreless until the 23rd minute of action when Schluter netted the first goal of the game. Mercy had a 3 shot advantage on the Bears but the score was 1-0 for the first half.

In the 77th minute of action, the Mavericks finally got on the board tying the game 1-1. The next thirteen minutes of action were scoreless so the game would go into overtime. Neither team could score in the first overtime and this highly contested game would keep going. Only two minutes passed in the second overtime, and the Bears scored the game-winning goal to win the game.

Mercy had a 14-8 edge in shots and New York Tech held a 4-2 advantage in corner kicks.

Mercy has a 5-10 record against New York Tech after their most recent loss.

The Mavericks have scored 34 goals this season and they average over 2 goals per game. They also have 38 assists on the season.

Their next test will be against American International Tuesday at 1 p.m.  It will be a home game for the Mavericks and a chance to get back in the win column. The Mavericks won last time 3-0 and have a 2-2 record all time.