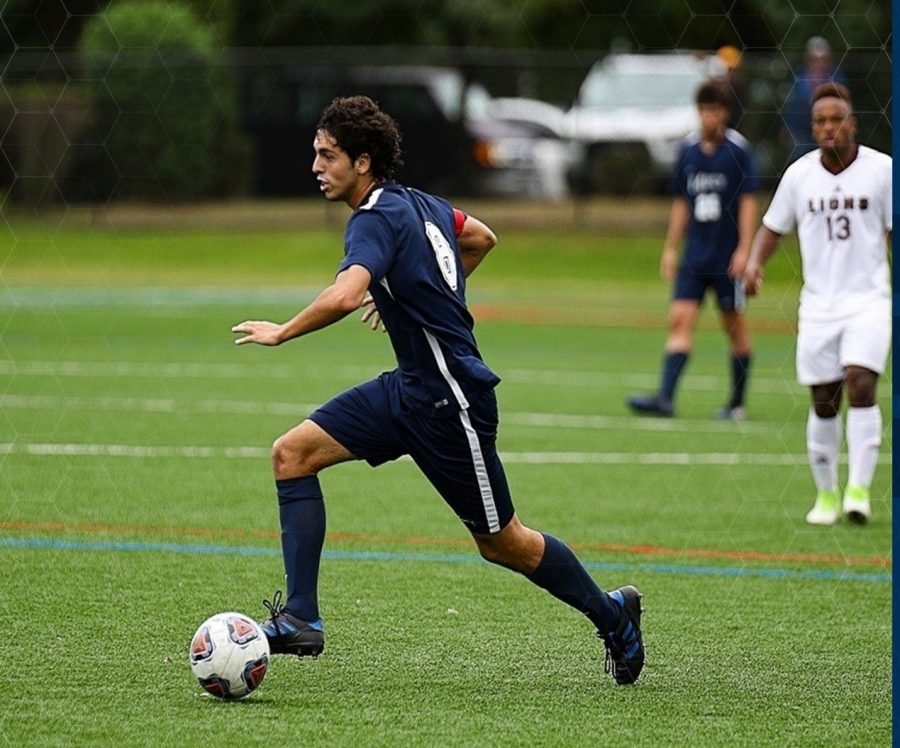 Senior Manuel Achondo cherishes all his memories he has of his hometown, Chile. His family and friends, but most important, soccer.

His whole life has always been surrounded by the sport of futbol. His father was a professional soccer player and always encouraged his son Achondo to play the sport since the day he started to walk. There was no escape from this popular sport in South America.

A door opened for Achondo. The opportunity of playing soccer in a country he has never been, the United States. It was an opportunity Achondo did not want to miss and he went for it. Achondo received an athletic scholarship from Mercy College for four years. He must maintain his GPA at 2.0 or higher and is not able to work during his time as an athlete. Achondo agreed to all the requirements and could not wait to play.

“Soccer right now is allowing me to live on the most amazing experience I ever had in my life,” says Achondo.

The Mercy College men’s soccer team has been ranked seventh in the NCAA Regional Rankings. The players work hard and do their best at every game with the help of an incredible coach and staff. They have hopes of making it  far in the post-season.

“My team earned a place into the ECC Conference tournament for the third consecutive year. We worked so hard the past three years, and we are very proud of ourselves,” says Achondo.

The Mercy men’s soccer team is dedicated to the sport and grateful for the opportunity of playing in country where dreams do come true. Even the challenges of studying at Mercy College does not stop their passion of playing out in the field.

“Receiving an academic scholarship would mean so much to me. It will help my parents not worry about the debt too much. I cannot receive the same help as others. It can be stressful,” says Achondo.

Achondo lived on campus for one semester and now chooses to live off campus. The scholarship he was awarded covers only seventy-five percent of his tuition. The twenty-five percent left is coming out of his pocket. However, having the chance to receive an academic scholarship if their GPA is incredibly outstanding would help the majority of the players.

“The majority of us have had a GPA that we worked hard for and are proud of. It should bee seen and maybe considered for something more,” says Achondo.

Majority of these players have proved themselves since their first year in college. Hispanic parents always push their children to do their best especially in school, he says. Some do not trust their children when they leave to pursue an academic and soccer career.

These International athletes come from a country that does not offer many opportunities. They value everything and their parents will help them achieve their dream no matter the cost. But at times the cost can be challenging.

A proposal has been proposed to the President of Mercy College regarding an opportunity for international athletes. Soccer coach Pedro Velazquez proposed international students who come their first year and prove themselves academically should be considered a partial or full academic scholarship their following year.

Velazquez has been working with President Timothy Hall in considering an academic scholarship opportunity for international athletes who proved themselves academically after a year into the school. It is a long and difficult decision but coming forward with the idea shows how others care and are willing to make a difference.

Velazquez used to play for Mercy College in 2010, was an assistant for five seasons and earned the positon as the head coach for four seasons. He is a proud Mavericks and always looks out for his team. Balancing his full-time job in the NY Fire Department and his part-time job as a coach isn’t easy, but he has no choice – he  simply loves the sport.

“If you do what you love, you don’t have to work a day in your life,” says  Velazquez.

The love for a sport can never be irreplaceable. Working hard every day and learning from the little mistakes are valuable. Waking up every day thinking about your passionate job with a smile on your face can never be seen as a hard task. The team is more committed about the game, they are focused and determined to be at the top.

“We are passionate about the game. It is always exciting competing with other schools but at the end of the day we want to win the championship,” says Velazquez.

Mercy College men’s soccer team will do their best to end the season with a championship. Winning a championship or not the team have come a long way once again. Mercy College is all about striving for success and is always opened to new ideas. The idea of giving a chance to passionate athletes from international countries the opportunity of receiving an academic scholarship seems incredibly heartwarming.