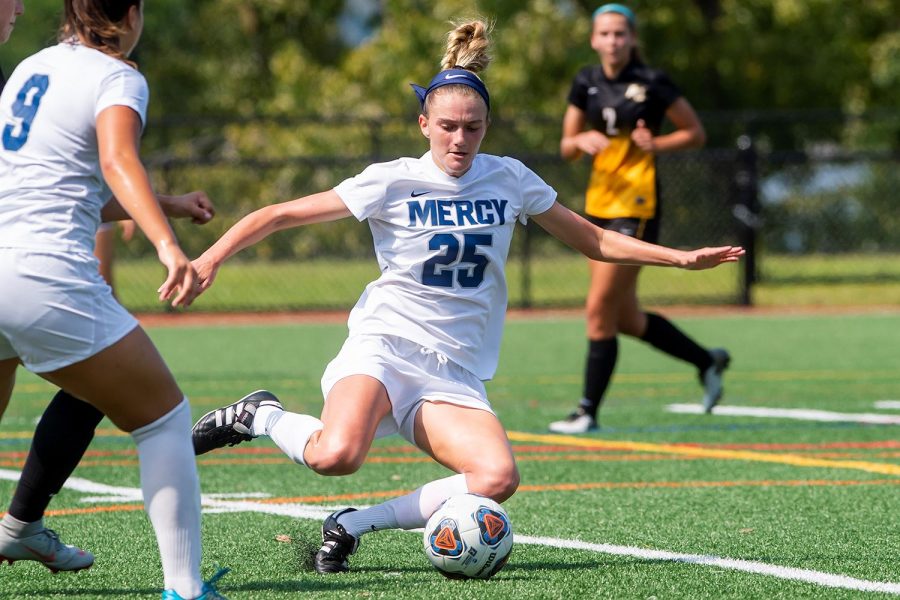 Despite a goal from senior captain, Trista Seara, the No. 2 seeded Mercy College women’s soccer team dropped a 2-1 decision to No. 3 seeded New York Tech in the ECC Tournament. This is the second season in a row that Mercy lost in the first round of the ECC Playoffs.

The Mavericks (13-3-2) saw their four-game winning streak ended and suffered their first home loss of the season. The Bears (7-6-3) will advance to the ECC Championship Game for the first time on Sunday where they will face the winner of Bridgeport/Molloy.

It was evident from the jump that the Bears would just sit back, absorb Mercy’s pressure, and hit on the counter. That’s how they capitalized on their two goals. A through-in behind the Mavs defense left goalkeeper, Mellisa Torres, in a bad spot. She sprinted out of her goal and tacked the ball, leaving the Bear’s striker flying over her and the referee awarding a questionable penalty.

Kelly Gerdes, of the Bears, slotted home the penalty as the Bears took a 1-0 lead against the run of play and ended the half.

Coming out of the half, the Bears kept the same strategy and frustrated the Mavs, who didn’t make any adjustments to how NYIT was playing. The Bears used speed to their advantage and worked time and time again.

Mercy adjusted later, getting Seara higher and higher up the field and on the ball. She worked her magic and got a shot off from outside the box to the left of the keeper, and in the 75′ got the lever for the Mavericks, shooting across her body and leaving the keeper rooted to the ground as the ball nestled in the net. This sent the Maverick faithful into a frenzy in the stands.

The counter-attack from the Bears struck again as Mercy conceded the goal that put them away for good. Another 2-1 on the net, Casey Luongo put Hannah Franco 1v1 and finished putting NYIT onto the finals in the ECC Tournament in their first-ever tournament appearance.

It was a tough defeat for the Mavs, who had expectations to win the ECC and challenge for a national title. While a setback, the Mavs still have a pretty good chance to make the NCAA Tournament. If they can get in, anything can happen as they appeared in the Final Four two years ago,

In good news, the Mavericks had players pick up some individual awards. Junior Goalkeeper, Melissa Torres, won ECC Women’s Goalkeeper of the Year. Also, along with Torres, sophomores Fernanda Castro and Sydney Cooper, and seniors Natalia Elizarraras and Trista Seara were named to the First Team All-Conference. In addition, junior, Kaitlyn Denning was selected to the ECC Second Team All-Conference.

Again, another great year from the Women Mavs. A lot left on the table but there’s still one ultimate goal to chase: National Gold.