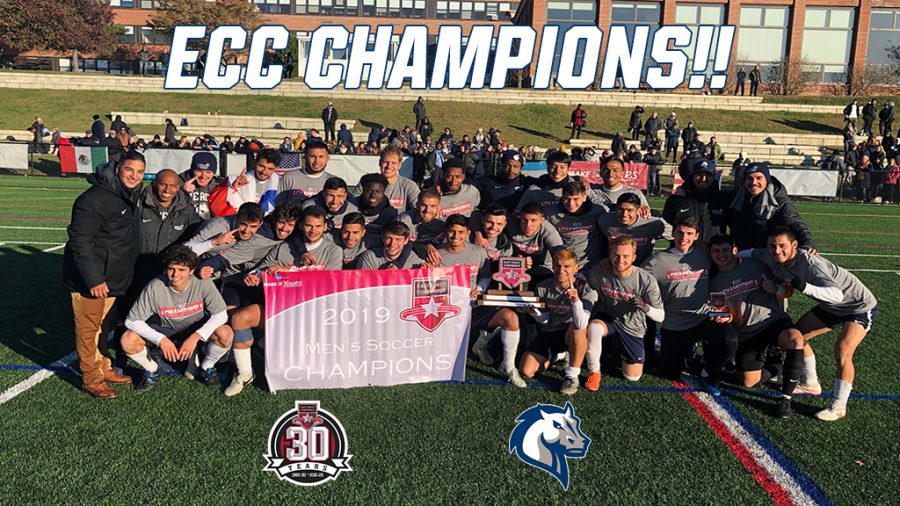 The Mercy Men’s soccer team has won its first ECC championship in fifteen years when it defeated the University of Bridgeport, 3-1, in overtime on penalty kicks.

In the semifinals, Mercy defeated Molloy College, 1-0. The Mavericks (14-3-3) were led by three penalty kick saves after triple overtime by Joel Serrano. Serrano had previously made three saved during regulation and overtime. Manuel Achondo, Ignacio Mangada, and Santiago Corral all scored on their penalty kicks.

Mercy did not have a strong past against Bridgeport, only compiling a 5-9-3 record.

Mercy was the top seed for the second straight season and hadn’t won an ECC title since 2004. With this appearance, Mercy has gone to the ECC championship for three straight years.

Achondo punched in his lone goal against Molloy in the 39th minute. This win tied Mercy’s win total of 14, tying the 1986 team. It was his fifth goal of the season. Achondo had three saves in the shutout. He scored on a penalty kick after Molloy foul in the box.

As for Molloy, it was its first appearance in the ECC since 2016. Molloy ended the regular season hot on a six-game winning streak heading into the playoff game.  Anthony Cestaro has had a stellar season scoring 24 points for Molloy. Carlos Bonilla added 19 points on the season.

Mercy now has an 8-6-2 record against Molloy. Bridgeport defeated Robert Wesleyan in the semifinals in the other side of the bracket.

Earlier in the week, some students earned individual conference awards. Gaston Rozenblum was named the ECC Defensive Player of the Year. Pedro Velazquez was awarded Co-Coach of the year.  Rozenblum and Velazquez have won their respective awards two years in a row.