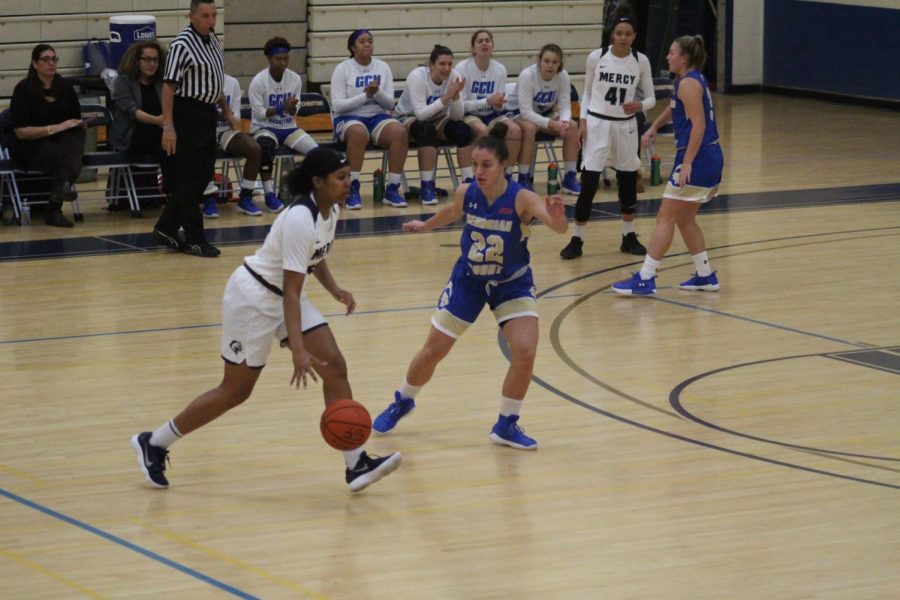 The Mercy College women’s basketball team grabbed their first victory of the season with a score of 79-63 over Holy Family. Junior Forward Amber Brown was every where for the Mavericks. She scored a game high 28 points and also grabbed ten rebounds. The Mavericks improved to (1-3) and Holy Family dropped to (1-1).

Freshman guard Katie Wall had a career day and scored 19 points. She also grabbed nine rebounds and dished out six assists. Senior center Abigail Collier had a nice game scoring ten points for the lady Mavericks. Anjelai Hayes was the leading scorer for Holy Family with 14.

The Tigers started off hot and had a 6-4 lead on Mercy but the Mavericks quickly answered with a 5-0 run. The game turned into a game of runs as Holy Family went on a 4-0 run. Mercy closed the quarter on a high note by going on a 10-0 heading into the second quarter of action. The Mavericks did not stop there as they went on another 10-0 run which gave them a commanding 29-10 lead with seven minutes remaining in the half. The Tigers were able to cut into the deficit a little bit and were down 39-30 in the first half.

Mercy continued to stay hot in the game by scoring seven unanswered points. Mercy went on 12-3 run later in the third quarter, but the Tigers were able to close out the third with a 6-0 run to trim the lead to nine.

Mercy scored the first four points of the final period. Holy Family cut the lead to nine once more, but it was not enough. The Mavericks closed out the fourth on a strong 10-3 run to grab their first victory of the season.

The Mavericks will look to go on a little win streak as they host Wilmington November 20th at 5 p.m.

The last time these two faced off Wilmington won by double digits 73-55. Amber Brown is averaging 19 points per game which is leading the Mavericks this season.