Women’s Soccer Falls to Molloy In NCAA Second Round 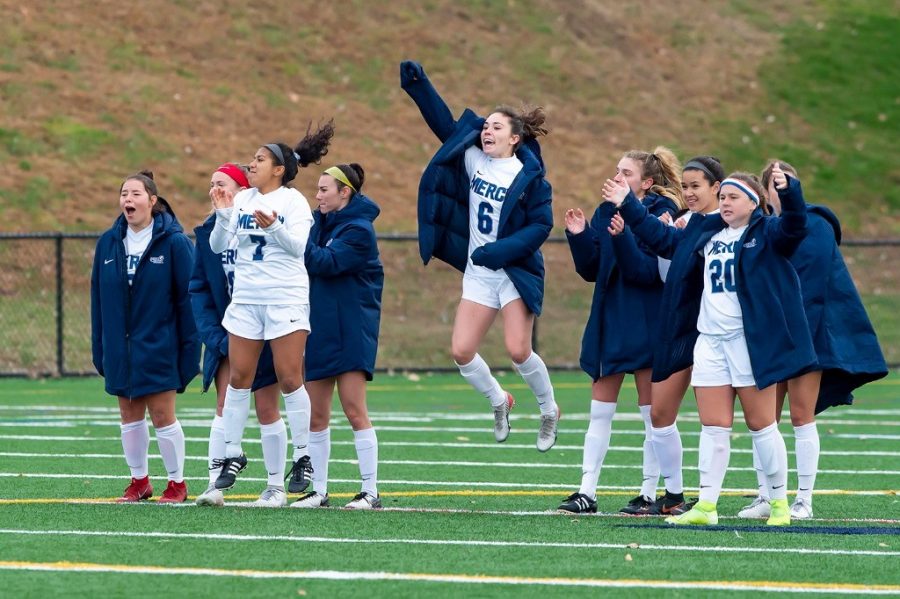 Mercy opened the NCCA DII Tournament with a win. With two penalty kick saves from junior Melissa Torres, the No. 2 seeded Mercy College women’s soccer team and No. 7 seeded Southern New Hampshire University played to a 0-0 tie with the Mavericks advancing by winning penalty kicks, 4-2, in an NCAA Tournament First Round matchup on Friday afternoon at Mercy Field.

Torres made five saves in regulation and both overtimes to post a shutout and senior Jess Brandt had a team-high two shots on goal. Junior Kaitlyn Denning added a shot on goal and senior Natalia Elizarraras had a team-high four shots.

The opening half saw Torres make two saves in the first 27 minutes of action. Elizarraras then hit the crossbar in the 34th minute, but the score remained 0-0. Torres made another stop in the 39th minute and the teams headed into halftime scoreless.

The Mavericks had a great scoring chance in the 67th minute when a Denning shot went just right of the net. Torres made her fourth save in the 89th minute and the teams went to overtime still scoreless.

Brandt had two shots on goal in the first overtime and Denning added another but all three were stopped by Rose.

Shae Roys started the penalty kicks for the Penmen with a make and Elizarraras countered with a make of her own. Jordan Butters then converted for Southern New Hampshire and Brandt followed with a make to tie the score up at 2-2. Torres then stepped up and stopped an Allyson Patterson attempt before sophomore Sydney Cooper found the back of the net to put Mercy up 3-2. Torres wasn’t done yet as she stopped a Maddie Austin attempt to keep the Mavericks in front. Sophomore Claudia McKail then buried her attempt to give Mercy the penalty kick win.

Despite a goal from senior Natalia Elizarraras, the No. 2 seeded Mercy College women’s soccer team played to a 1-1 tie with No. 3 seeded Molloy College before falling, 3-1, in penalty kicks in an NCAA Division II Women’s Soccer Championship Second Round matchup on Sunday afternoon at Mercy Field.

The Mavericks (13-3-4) see their season come to an end in the NCAA Tournament for the third straight year.

Elizarraras scored her fourth goal of the season and junior Melissa Torres had a game-high nine saves. Sophomore Anicia Reyes had a team-high four shots on goal.

Molloy was led by Lauren Marinello who scored a goal. Jackie Carty made seven saves in goal.

Torres made the game’s first save in the 6th minute, but the Mavericks scored first in the 8th minute when Elizarraras scored off a corner kick to give Mercy an early 1-0 lead.

Junior Kaitlyn Denning came back with another shot on goal that was stopped by Carty in the 9th minute. Torres made two more saves in the opening half and a Dana Poetzsch shot hit the left post to keep the game at 1-0 heading into halftime.

Molloy wasted little time in getting on the board in the second half when Marinello found the back of the net in the 47th minute to tie the game up at 1-1.

Carty made five saves in the second half and Torres added two to send the game into overtime tied at 1-1-1.

The first overtime saw Molloy force Torres to make three saves but neither team was able to score sending the game into a second overtime.

The teams traded shots on goal in the second overtime but once again neither team could score so penalty kicks would be needed.

Poetzsch opened up the shootout with a make and sophomore Claudia McKail followed with a make to make it 1-1. After a miss from both teams, Lexi Verni found the back of the net for the Lions to bring the score to 2-1. After another Mercy miss, Sabrina Bell connected and gave Molloy a 3-1 lead. The Maverick’s last attempt went wide sending the Lions to the Third Round.

The Mavericks wrap up another strong year winning 13 games, a top 2 regional team and ranked in the top 25 in the country this year. Mercy will lose 4 seniors to graduation, team captain Trista Seara, Jess Brandt, Natalia Elizarraras, and Mackenzie Warner. They will also lose a key goal scorer in RaeAnn Ioannou who is a graduate student at Mercy.

It will be tough to replace the production from the seniors, but with another top recruiting class and experienced sophomores and juniors, the Mavs should be in another prime sport to compete for an ECC title and another run in the NCCA tournament.