A One-on-One with Mavs’ Skipper 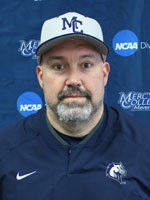 Just before Mercy’s baseball team takes the diamond on Feb. 15 in Wilson, North Carolina, The Impact had the opportunity to sit down with head coach, Chris Schoen, who is going into his fourth season in charge. We talked about the outlook for the 2020 season and what it will take to get the Mavericks to the ECC tournament after missing the tournament last year by one game.

Impact: Last year you guys had your second straight 20-win season. But, you were one game shy of making the ECC tournament. So, what is the difference between last year and this year so far as you conclude winter practices and gear up for the start of the season?

Coach Schoen: With a lot of the returners, they understand how a winning program works. I have a lot of returners coming back. Five of my starting nine are coming back, plus I have three weekend guys who have experience playing. As long as we stay healthy, we are looking to take the next step.”

Impact: You have your core four coming back in: John Mooradian, Anthony Murphy, Jack Kelly, and Andrew Hernandez. What have those guys meant to the program and how can they help lead this team to an ECC tournament birth?

Coach Schoen: Mooradian and Murphy are two of our captains. They’ve been the building blocks of what we started here for the past four years. Andrew and Jack are huge pieces on the pitching side but you also have Miguel Ortiz Sanchez, who has been here and is ready. This will be his third year with us and he’s our starting second basemen. So, they’re huge regarding taking ownership of this program.

Impact: Any newcomers to be on the lookout for this season?

Coach Schoen: On the mound, you should be looking for Anthony Burgio. He is a freshman from White Plains who will be a weekend guy. Erick Miranda, a transfer, should see some significant innings, as well as Kevin Seckler. Defensively, we have three new catchers — this is probably the strongest catching contingent we’ve had since I’ve been here. That is freshman Justin Glennerste and two sophomores, Francisco Paulino and Brandon Maravi. I have a freshman, Nolan Giblin, from Syracuse who will see significant time at third base. Another new guy who will see some significant time is Nikko Liguori, who is an outfielder transfer.”

Impact: You guys start your season down south against Barton College. What are the challenges traveling down the coast to play Barton which your career record against the Bulldogs is 4-4?

Coach Schoen: They will already have seven games in by the time we play them. Actually, nine. They have two more games this week. Same with Newberry and Francis Marion, they’re all southern teams they have all been out for several months. They all got seven to ten games by the time we play them so they already worked out their kinks. So that’s what we got to work out. With northern schools going down, you have to be careful of your pitchers and not tax them out right out of the shoot so we got to watch out for that. So it will be interesting to find out how deep our bullpen is. The major thing when you go down south is to get everyone comfortable. I take the first 15-20 games of the season to figure out where everybody will fall into place.”

Impact: My last question, The ECC had their preseason rankings and had Mercy at six, which is second to last in the conference. Do you use that as motivation to motivate the team?

Coach Schoen: There is always something there that, you know, you feel like you’re not getting respected for what you’ve done. But, then again, we have to prove that we are an upper-echelon team. We have had the opportunity the last two years to break through and haven’t yet. I think we have a good shot of doing it this year, but again, until we do it, we will not get that respect.

The Mavericks will play their first 10 games on the road down in the Carolinas. They’ll return for the home opener in Dobbs Ferry on Thursday, Feb. 27 when they host Bloomfield College at 3 p.m.