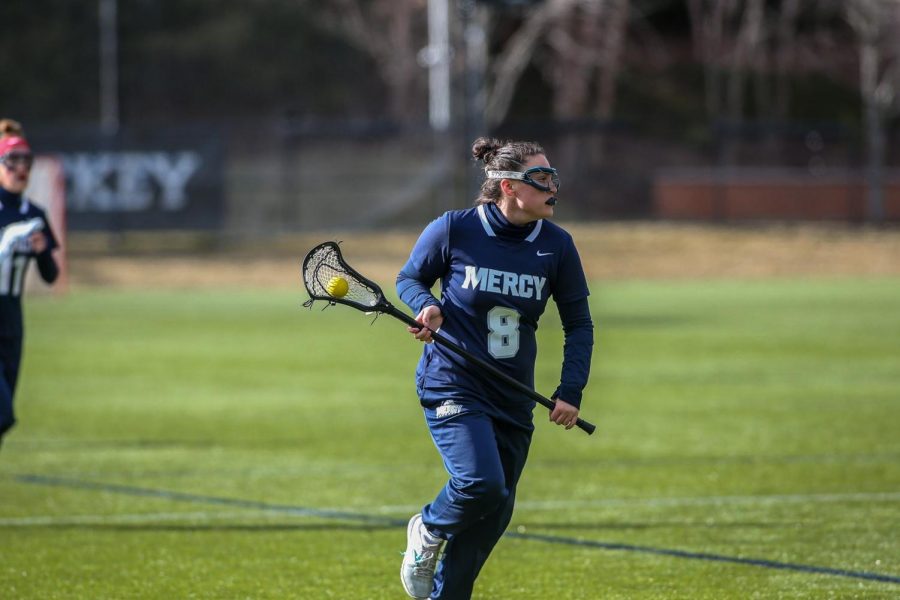 Led by a game-high four goals from junior attacker Briana Corace, the No. 11 Mercy Mavericks women’s lacrosse team won their tenth straight home opener. They defeated Thomas Jefferson University on Wednesday, March 4 by a score of 13-9 to improve to 3-0 on the season.

In addition to Corace’s four goals, the team also got two goals each from attackers Erin Chalich and Casey Shimborske. Midfielder Micayla Brady led the team with seven ground balls.

The game opened up with Mercy being the first ones to get on the score board with a goal from Shimborske off of an assist by senior Katherine Sanchez. After Jefferson answered with two consecutive goals to take a 2-1 lead, the Mavericks came back with back-to-back goals by Sanchez and Corace to put Mercy back on top.

The Mavericks gained some breathing room with two more goals coming from Corace and one from Chalich to give them a 6-2 lead with eight minutes left in the first half.

After a couple goals from Jefferson cut the Mavericks lead down to two, Shimborske scored her second goal of the game to make it 7-4. Each team scored one more goal to end the half, and the Mavericks went into the break with an 8-5  lead.

The second half saw Mercy take firm control of the game as they scored 5 straight goals to build a 13-5 lead. The five goals came from senior Talia Stagnitta and Taylor Bishop as well as Chalich, Corace and Sanchez. The eight goal lead was too much for Jefferson to overcome, as the closest they cut the deficit to was four as the Mavericks won the game 13-9.