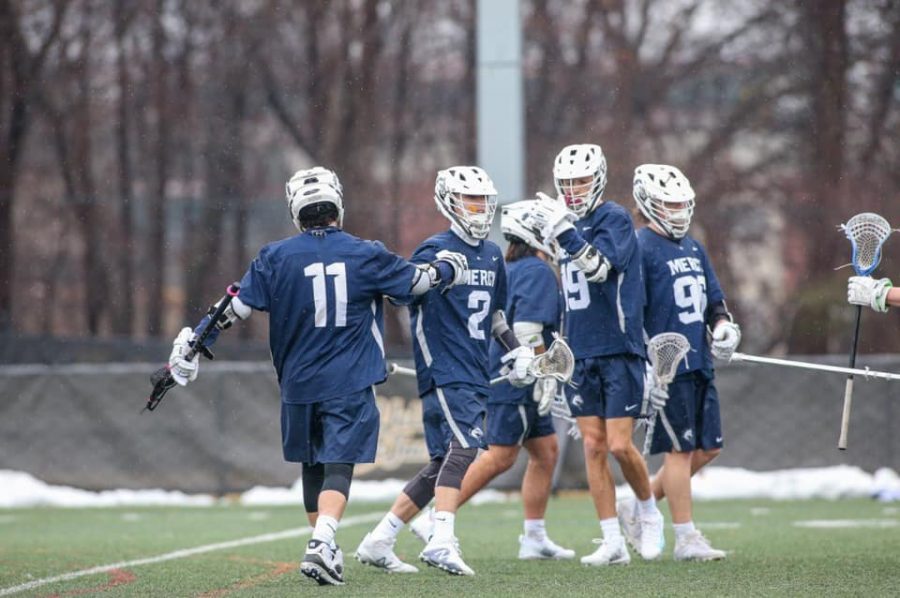 The Mercy Maverick Men’s Lacrosse team will have to deal with uncertainty around the upcoming season as they look to remain one of the top teams in the East Coast Conference.

The Mavericks followed up their 2019 ECC championship with a 5-1 start to the 2020 season and looked poised to contend for their second ECC championship. This was all until the COVID-19 pandemic led to the cancellation of their season.

Men’s Lacrosse Head Coach Jordan Levine will enter his ninth season since being named to the job in 2012. He will be looking to get the team ready for their season which is planned to begin on March 20 against Roberts Wesleyan College. The season will consist only of conference games as of right now. However, this could all change at a moment’s notice.

“Everything is fluid,” according to Levine.

This has been the situation for all of Mercy’s athletic team as they make their return to campus this fall. Levine and other coaches have had to divide their teams earlier in the fall into small groups for conditioning with social distancing, wearing masks, and weekly testing.

They were able to progress through stages, the second being skill practices for two weeks and the third being full team practices as long as they had not had a positive COVID-19 test on the team.

They have been running full team practices for the past five weeks and as of Nov. 18, have not had any positive cases in the entire team.

Tommy McPartland, a senior captain who will be returning for his fifth year as a midfielder, has praised the athletic departments for following NCAA and CDC guidelines since they have returned to practice this fall. “The athletic department as a whole has done a great job following protocol in order to get us back on the field. We are able to practice when schools across the United States are not having the same success keeping cases down.”

McPartland believes this will help give them an advantage over other teams when dealing with the almost year-long layoff between seasons.

Fellow captain and faceoff midfielder, Antonio Rey, pointed out how every other team has to deal with the same circumstance that they will face. “The uncertainty of playing does weigh heavy on us, especially for some fifth-year seniors who have put their careers on temporary hold, but that is something out of our hands.”

This uncertainty has been a major concern for both the players and coaches but McPartland and Rey have remained committed to preparing for their games in March as if they are set in stone.

“We need to make sure as individuals we are taking care of business during the break while we are all separated so that when we return, we can focus on our team practices.”

Once the Mavericks are able to return to the field for game day, they will have high hopes for another successful season.

The Mavericks will return all four captains and their entire starting lineup from last season which includes six of the eight seniors returning. The NCAA has granted them an extra year of eligibility while they are attending graduate school.

The lineup will also be boosted by incoming freshmen and transfers which Levine, McPartland, and Rey all believe will have meaningful contributions to help the team compete this year.

This success will come from playing consistently which Levine believes is the key for the team to have another deep run. “To compete at a high level you need to have balance from all over the field. Faceoffs, goalies, defense, offense. It’s just coming out and playing at a high level consistently.”

Levine believes this will put them at the top of the ECC with a good chance at bringing home Mercy’s second ECC Championship and a potential NCAA tournament bid.

While everyone’s goal is set on winning another ECC, captains Rey and McPartland have their eyes set on a potential national championship run.

“I think all those things coincide with one another and lead to us hopefully playing for a national championship. This team has won an ECC tournament and taken the next step forward. Now our sights are set on playing in the last game of the year,” Rey stated.

McPartland echoed his statements. “We expect to win the ECC championship and be there in that championship game come spring. With the coaching staff putting us where we need to be and the talent, this team has, anything short of a national championship is a failure.”

The Mavericks look poised to be in a position to contend for another ECC Championship and be one of the top teams in the nation with a chance at a national championship.

Levine noted how no matter what, Mercy College is hosting the ECC championship for nen’s and women’s lacrosse this season. “It would be pretty nice if we were playing in that game on our home field.”