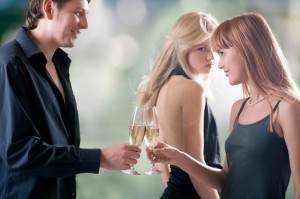 Its crazy how correct the term is the game, when referring to getting girls and dating and why guys, and some girls are called players. Because it really is all a game. Being a player is the only sport that doesn’t really require any physical ability at all, it’s all mental. Now don’t get me wrong a good looking face, body, and a good fashion sense defiantly gives you a great advantage in the game but it’s not all that it’s about. A good personality can win over almost any girl.

But for now we’re not talking about winning hearts. In this game your either a player or you get played.  And it’s not only guys who are players there’s plenty girls that do it just as well. To be considered a player you just have to be able to have a lot of girls basically at your disposal when you want them there. And obviously for girls it’s the vis versa but in our society girls are considered sluts before there considered players.

There’s a million ways to get girls so I won’t get into that and despite what anyone thinks the best ice breaker and way to start any sort of relationship with people of the opposite sex is to be good-looking or exceptionally funny, sometimes rich works just as well. Once you’ve got a couple girls in the line up its a lot easier to keep them going then you think.

First rule, tell them for whatever reason you don’t want them to tell anyone or make a big deal about your relationship. The less they talk about being with you the better. Giving them a line like “people always ruin my relationships so I keep them to my self as much as possible now”.  Or anything to that effect will work. Make it your own and whatever works for your situation. “Your parents don’t want you dating” or some legal or religious reason. It’s all about stringing them along so the best way to keep a girl interested and consistently getting more into you, is telling them “you had a bad relationship in the past and your terrified to get into another relationship or to get hurt again”. This excuse actually does a lot for you, 1.It’s the most easy to believe because so many girls can relate to it, 2. Emotional problems like that make it very easy to make the girl feel bad for trying to push you into a relationship or falling in love when you’re not ready (even tho in the mean time there falling for you). And 3 and most importantly now that they “know” you’ve been hurt before they “know” your sensitive, someone who can be a good boyfriend, and the best part; they usually think since you’ve been hurt before you’re not going to try and play them because you “know what it feels like to get your heart broken”

Once you’ve tactfully led the females to believe that those are the guidelines to your life at the current time, keeping them in the picture and at your will is pretty simple. From that point you can’t hang out with them a lot maybe once every two week with solid excuses why you can’t hangout every day. This keeps them from falling in love to the point where they will demand a relationship of Facebook proportions. Yet, you will still be the guy they like, and the guy that they can’t stop thinking about. So by doing less you’re really doing more.

Its also important the way you act when you do see them act like their best friend in the world like you care about every part of their life and you just want to be friends but then every once and a while say something giving sexual innuendo or touch them in a way a friend wouldn’t. If they’re quiet and humble then treat them like a princess. If their high-maintenance and really good looking and obviously are hit on all the time and have guys throwing themselves at them, be cool but rude and make fun of a couple things they do or minor things about their appearance. By breaking down there confidence it brings them down to your level and usually back to earth.

To make yourself interesting to them its basically a system of giving them the opposite of what there used to but never letting them think they have you wrapped around there finger or even that if they mess up one time you won’t kick them to the curb.

If they ever get mad at you for something get madder at them for being mad and if they have suspicions your seeing other girls or playing them get blatantly offended and hurt and angry they would even think like that. (now read this slowly) You need to make her believe, that you believe, the thought of you cheating is completely ridiculous. If you keep that up soon they will find thinking that way about you or accusing you of anything isn’t worth the fight or losing you over so there suspicion and anger die out from the start without growing into anything bigger. When worst comes to worst and your really caught just get away and ignore any phone calls. If they have nothing to go off and don’t get the satisfaction of telling you off they’ll never leave the picture then a while later come back to them with the best and simplest excuse you can think of. At this point there anger has subsided and there is nothing in them left to drive them to not believe you.

Now these techniques will do what there meant to but don’t get to cocky karmas a bad girl and she always make her rounds. One day your going to find yourself in love but are you going to be able to believe the fact that she’s not doing to you what you did to those other girls? Because guess what, like I said. Girls can be players too!!