2016 Presidential Election: To Vote or Not?? 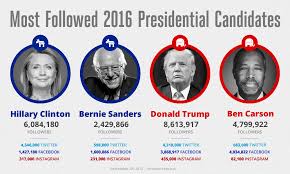 The 2016 Presidential election has been chaotic, to say the least. The personas of certain presidential candidates overpower their actual knowledge  of politics. For example, Donald Trump is known for being a wealthy businessman and had a hit show called The Apprentice on NBC, which started in 2004. Donald Trump was the executive producer and host on the show. The show ran from 2004 to 2015.

Trump is well recognized for his antics on the Apprentice.  Also, Trump never has a filter when voicing his option on controversial situations. Then we have actual presidential candidates who have experience on politics like Bernie Sanders and Hilary Clinton, the wife of former president Bill Clinton.

Trump has contributed to making the 2016 presidential election the most discussed race in years. Some people may view this election as a publicity stunt because Donald Trump is running for president of the United States, and has a legitimate chance to win. Based on the reaction and poll voting Trump is one of the top candidates to win the republican race.

Trump’s only realistic competition is Hilary Clinton because she is well known and some what respected in politics. Also, America might be ready for a women to become president. After all, Obama was the first black president a few years ago so why not have the first women president of the United States of America.

Why vote when Americans know that their vote may not even make a difference. Trump’s persona may overtake the other candidates based on his stern actions. Trump speaks whatever is on his mind at any place.

It appears at times that Trump is reaching for attention by saying the most offensive things possible. For example, he said that he wants to ban Muslims. Trump also wants to patrol the boarder to get prevent Mexicans and immigrants from entering the United States. Trump’s antics and outrage comments  has continued to irritate people weekly.

Could it be possible that all this time Trump was running for president it was a publicity stunt? Why not run for president of the United States and turn the entire campaign into a documentary or a short tv series to makes millions of dollars.  Americans would definitely  tune in to watch a TV series or documentary about Donald Trump running for President of the United States.

Americans should definitely vote for the 2016 election to truly find out if their vote counts or matters. We will see what direction people want America to go in. Also, the college students in particular can make the biggest difference in the election. The Electoral vote is essential in the presidential voting polls, and could be the difference between winning and losing an election. When Obama was running for President the electoral vote helped him win the election.

However, the decision to vote is optional and not mandatory. People must be aware that this election may be the most important one in years because if Trump becomes president, a lot of things will change for minorities and low middle class. At least if you do vote as a minority or lower class person, Bernie Sanders should be your option.

Sanders is all about supporting minorities and middle class and lower people. Sanders wants to provide free education to college students to lower the debts of student loans.  Sanders also is all about providing more opportunities for the less fortunate people and getting them out of debt they will have to pay for the rest of their life.

Bernie Sanders may be the last hope for the struggling lower class people in America. The choice to make a difference in the election is up for grabs. The same way celebrities were promoting how important it was to vote for Obama in the 2008 election is the same way they should be for the 2016 election with Bernie Sanders.  The power is in the hands of the lower class people more than ever before.