College Movies You Probably Have Missed 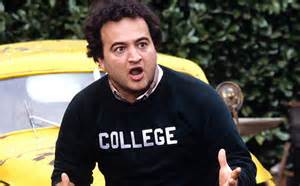 Old School. Pitch Perfect. The Social Network. Legally Blonde. Van Wilder. Slackers. Road Trip. Accepted. As college students, you have watched these movies about college students one hundred times over. But college movies didn’t start with Will Ferrell getting a dart in his neck from a redneck Stifler or Elle Woods showing off her fashion sense. There were tons made beforehand. Let’s not forget our roots.

This movie was a box office flop but a cult classic among 90s college students. Essentially Zack Morris (you know who that is, right?) and his roommate her about a college urban legend. If your roommate commits suicide, you get straight A’s for the semester. So the failing pair run around campus trying to off their classmates in this dark comedy. Notably Cliff, who is just, like, well, special.

In the mood for a tear jerker? Joe Pesci is a bum living the Harvard library who is actually a genius (of course he is!) who stumbles upon Brendan Frasier’s thesis. He holds it ransom. Friendship forms. You get the point. But…some awesome monologues ensue.

OK, this is where things get a little weird. Pretty much every upcoming star in the 90s star in the twisted tale based on the novel by Brett Easton Ellis, who also wrote American Psycho. Patrick Bateman’s brother is a major character in this story (played by Dawson’s Creek) So picture this story as a sort of American Psycho training demo.

The best part of 80s movies is the ludicrous plot lines, like this one, where a white kid can’t pay for Harvard so he….takes tanning pills and pretends to be black for an African-American scholarship. So he is a white man living in a black man’s world, and in the process falls for a black woman.  An 80s classic.

So if this is your thing, check out Method Man and Red Man trying to fertiilzie weed with the ashes of the friend, who somehow returns as a ghost and helps them get great SAT scores and…well, never mind, but it’s funny.

What’s PC on campus? A dreaded phrase from the 90s where everyone was offended by EVERYTHING. Enter Jeremy Piven and his group, who live in the party house known as The Pit. Their goal – create as much anarchy on campus to get the campus president fired and disrupt all you PC stereotypes out there. Tremendous music scene with George Clinton and the Parliament Funkadelics to boo.
4. Real Genius

Mitch is a uber-dork sent to a gifted college for teenagers. There he meets uber-cool Val Kilmer, who used to the top prodigy at the school before he became the ultimate slacker. Tie in some Cold War themes about kids making weapons (its the 80s, always Cold War themes) and a killer 80s soundtrack, check it and find out the secret about Lazlo Hollyfeld, the missing student who lives in the closet (aka a young Uncle Rico!). And of course, the house of popcorn.

3. Revenge Of the Nerds

Dorks strike back! All of the dorks get kicked out of the dorms when the jocks burn down their frat house. They are sent to live in the gymnasium. They counter with starting their own fraternity to get an off campus house, much to the ire of all the cool fraternities. So they get picked on but, this time, the nerds strike back.

Rodney Dangerfield plays Thornton Melon, a millionaire and the world’s oldest living freshman, who goes to college to try to inspire his slacker son. Of course, he pisses the world off in doing it, falls in love with the teacher, draws the ire of the dean, and…becomes the most popular guy on campus. Trust us, you’ve never had a lecture like the late great comedian Sam Kinison’s, and well, thank god for that.

OK. If you haven’t seen Animal House, and don’t know about the hijinks of the Deltas, then we are coming to your house and smashing everything in sight. Even if you don’t have a guitar.