‘I Know What You’re Going Through’ 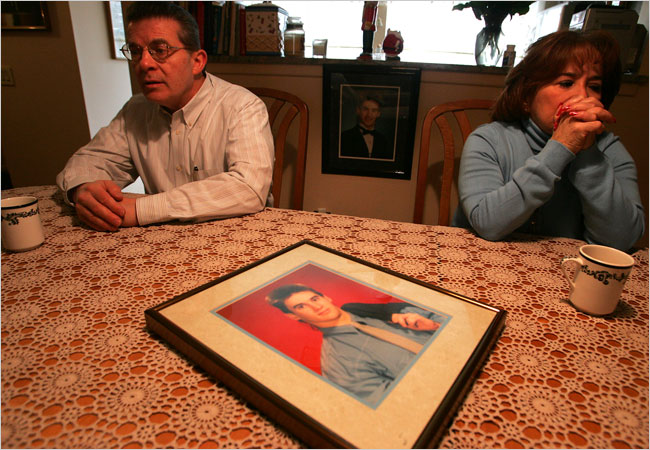 Following Louis’ death, people would tell Balancio “I know what you’re going through” or “the passage of time will make you feel better.”

Others would explain how she should and would feel, but this would completely shut her down.

“I stopped listening to them,” Balancio said, “They knew nothing about what I was feeling, and I wrote them off.”

“Grief has no destination. You don’t just move on with your life. It’s a journey,” said Balancio. “I’d rather someone tell me that they’re there for me, instead of saying they know how I feel.”

People would tell her that as each year goes by, it gets better, but Balancio disagrees with that. Instead, she found that it was harder as the years went by, especially around his birthday.

“I remember asking him, ‘Do you want me to bake a cake or buy one?’ And he said, ‘no let’s buy a cake so we can spend time together,’” said Balancio.

With that, the Balancio family went out to eat and then back to their house for cake. That’s the last memory she has of Louis as she recalls one of the last conversations with him.

“Sometimes memories are more important than anything else.”

With that in the back of her head, as each birthday came a long, the first one wasn’t as bad. The second birthday without Louis there, it was worse.

“Life kept going on, but he wasn’t there, instead, he was apart of our memories that we live on with.”

During the stages of grief, everyone acts differently. There are some people who don’t mind talking about it, while there are others who don’t want to talk at all. There’s no cookie cutter way around grief, as Balancio refers to it. When they’re ready, they’ll talk about it.

This is something Balancio noticed at a corporate party for her husband’s job with people he’d been working with for four to five years.

“None of them knew about Louis,” Balancio said. “He doesn’t talk about him.”

Balancio admits she’s much different. She copes by telling. “You can’t be on a Stop & Shop line with me without knowing about Louis.”

There was a point when Balancio knew she couldn’t share her grief with her husband because she was afraid to.

“I knew how much it was hurting me, and I didn’t want to hurt him more,” Balancio said.

Almost 85 percent of marriages fall apart after a child dies, but Balancio and her husband are in the 15 percent that did not.

“We became interdependent, where we don’t need each other, but we want each other in our lives,” said Balancio. “That’s something I try to teach my students to do with their relationships.”

The grief of losing a child is not only hard on the parents as individuals, but also on others around them. For Balancio, this was her mother, for whom she felt sorry.

“Not only did she lose a grandson, but she lost a daughter,” Balancio began to say. “I was a different person. I was no longer the same daughter she had. I became a daughter of a murdered child.”

Dealing with her mother’s grief at the same time as hers, Balancio knew her mother wanted very badly to help her daughter as much as she possibly could.

That’s when Balancio created what she calls the ‘Happiness Calendar.’

“We would talk everyday and it would be doom and gloom. I couldn’t handle it anymore,” said Balancio.

“When I knew she was happy, I felt the same way.”