The Students Are Her Children Now 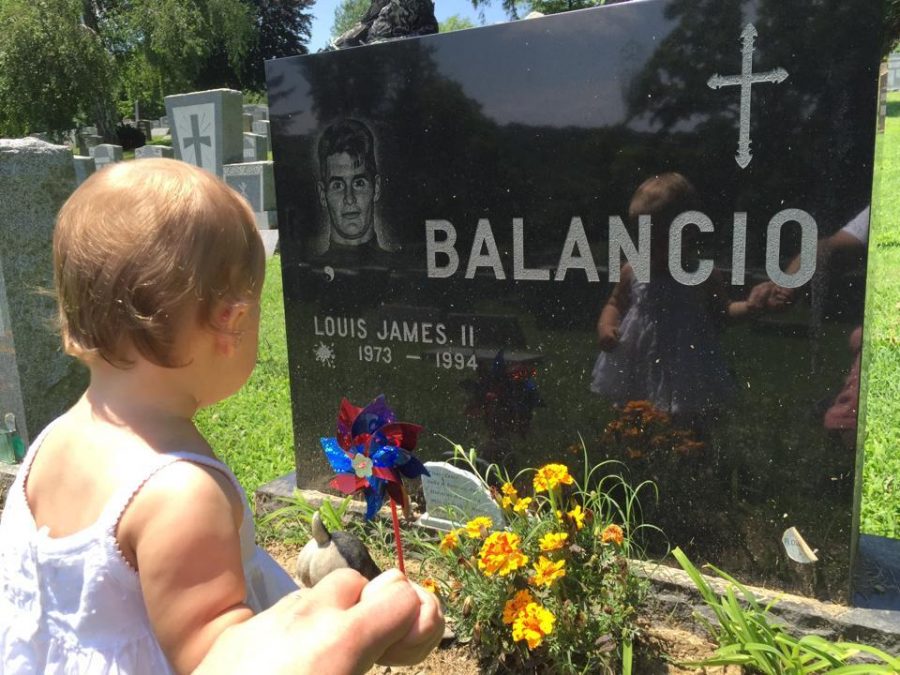 During her time of grieving, Balancio said that you find people who will not be able to deal with your grief and admits to losing some friends during the process.

“They thought grief was contagious; they didn’t want to be around me,” said Balancio. “Some close friends who were in my wedding party don’t talk to us as much anymore and when their children were married, we weren’t invited. We would get Christmas cards, that was about it.”

She paused, then added, “I guess they thought if we went to the wedding, we would feel bad because our sons were the same age.”

Balancio is okay with this, though. She finds that the more empathetic people are in dealing with your situation, the more you want to keep them in your life.

“You can’t control the way you grieve,” said Balancio. “Grief is the price we pay for love. The more you love someone, the more you grieve.”

To deal with her grief, Balancio furthered her education with seven postdoctoral certifications, in addition to the Ph.D and three master’s degrees she already had.

“If you look at my resume, it looks really strange, like there’s something wrong,” Balancio said. “But that was my way of grieving.”

By furthering her education, Balancio was able to create a class that would teach her students the necessary skills to navigate through this dangerous world and to open their eyes to the fact that evil exists. This is why Mercy College offers Managing Human Conflict and Mediation courses.

In this course, Balancio teaches her students about trust and about understanding who’s in your friendship networks. She believes that if you don’t trust your intuitive gut feelings, you could have problems, which is what she felt happened to Louis.

“A lot of us are too naive and don’t see through our lenses clearly. We’re trusting people who are hurting us, can hurt us, or will eventually hurt us,” Balancio started to say. “And in some cases, they hurt us really badly.”

“I believe Louis did not know enough to trust his instincts when he perceived evil,” Balancio said. “He was with people who abandoned him, where he died alone, while his ‘so called friends,’ ran away and left him.”

“I’m not teaching this course where we sit in a circle around a bonfire, hold hands and sing kumbaya, I’m teaching a class to make sure all my students understand trust and how to negotiate,” she added.

“I want everyone to be a little more aware.”

Managing human conflict is not just one discipline, it’s considered to be a mutt according to Balancio. When she had the idea in mind, she found legal studies professor, Diana Jeutner, and political science professor, Arthur Lerman, and they would teach the course together.

“We all had different learning styles. Arthur would come in with history books; Diana was the box, she was the ‘this is what we’re doing, no other way,’” said Balancio. “And then I’d come strolling in with a TV set wanting to show movies.”

“We’d fight all the time and students would say, ‘This is conflict!’ And they’d all take notes on us.”

Balancio found that teaching this course was a way for her to deal with her anger and grief. Balancio doesn’t see grief as a sign of weakness or a lack of faith. It just helps us redefine the world because we’re seeing it from a different perspective, which is something she uses while teaching her classes.

She also uses the same techniques that she used when Louis first passed away, such as the Happiness Calendar.

It not only helped her grieve but helps her honor Louis’ life. During the January training, they not only pay a good part of it but feed everyone who participates in it during the six days.

“Mercy does not pay for it,” Balancio said. “It comes from the Louis Balancio Scholarship Foundation.”

Aside from the mediation training, Balancio hopes to expand the foundation to help people who are in the same shoes as she once was.

“I was beat up by the system for more than 18-20 years, and I just want to help homicide survivors when they’re going in court,” Balancio said. “I can help them with their victim impact statements, something I had a tough time with myself.”

“That’s how my grieving process works.”

For Balancio, her students helped her deal with her grief and brought Louis’ life back, each time she taught them. And recently, it’s been through her book for Managing Conflict: An Introspective Journey to Negotiating Skills.

But for other people, it’s different, as she refers to her son Jeffrey.

When Jeffrey got married, he had four bridesmaids, four groomsmen and a maid of honor, no best man,” Balancio started to say. “The maid of honor walked down the aisle with a single rose and a black bow on it, as there was an empty chair for Louis.”

“Louis was the best man.”

She whips out a picture as she adds, “Fast forward to present day. He now brings his baby to let her know about her Uncle Louis.”

Another person who stands out in Balancio’s mind when it comes to remembering Louis was one of his good friends. He was the same kid that Louis would always choose first on the teams.

“He became a dentist and lives in Washington now, but he makes sure to come home every year for Louis’ birthday,” Balancio said. “He’s the one who puts the beer bottles on the grave.”

Balancio doesn’t and cannot forgive Anthony DiSimone, who murdered Louis, for what he’s done, and she knows she cannot live on revenge, as much as she’d like to. The way she puts it is, “Revenge is like holding a burning coal. If you hold it long enough, you burn.”

The only revenge Balancio can give is arming her students and making them more aware. She wants to make them become good negotiators and mediators, not to have people break their trust.

“The way I set this course up was to make everyone more emotionally intelligent,” Balancio started to say. “Become more aware of yourself and more able to regulate your emotions and to be able to motivate yourself.”

“You can live life unfair, but you have to be smart about it.”

It’s no secret Balancio’s students filled the void that she had after Louis passed away. Each and every one of them has helped her through her grieving.

“I don’t have Louis to worry about, to be concerned about, and to guide anymore,” Balancio says.

“My students are my Louises.”