“Why am I here? Why did I get out and not him?” Brian continues to wonder.

On that treacherous day, Brian left someone behind. Steve.

Steve was one of Brian’s co-workers but also one of his closest friends.

“His death has haunted me for years,” Brian utters with emotions taking over his face.

He blamed himself for not making Steve leave the tower with him.

“A survivor experiencing guilt has to be one of the worst things in the world,” Brian says.

Years passed, and he never talked to Steve’s widow or kids. He didn’t know what to say.

“I’m sorry? I left your husband to die because he wouldn’t leave with me?” What do you say to your deceased best friend’s wife when you were the last person to see her husband before he stopped breathing from the fumes of smoke, got crushed by falling ceilings, and then burned to death?

But then one day, there was a ceremony held in New York City for a painting of all the people who died in the towers on Sept. 11. Brian knew they were coming and was surprisingly excited to see them. He walked into the ceremony and immediately saw a familiar face. It looked completely identical to that of Steve.

It was his son.

The boy’s mother walked up and looked at Brian. You could see the heartache in her eyes. The pain of seeing Brian standing next to Steve’s son was unbearable.

“It’s Stephen,” she said quietly in her shaken voice.

Steve’s father spoke up, “ What was so important that Steve didn’t leave?”

Brian didn’t say a word because truthfully, he had no idea.

While I listened to Brian tell me this story of Steve, my heart broke. I was as speechless as Brian was when Steve’s father asked him why his son didn’t leave.

A question that will forever remain unanswered, like so many that day. Maybe it’s a good thing. What answer would have have been sufficient?

After speaking with Brian and Cyndi, they took me to the 9/11 museum and showed me around. They volunteer. Many survivors do without sharing that information. Walking around the exhibit, I was chilled to realize how survivors were everywhere around me. Faceless.

Yet there was this one room filled with all the faces of the deceased that had once been recognizable. I found Steve’s face. He looked so young and happy in that picture on the wall. But there were countless faces not shown because there were so many bodies that had instantly turned to ash that day. Gray squares were set in place on the wall to represent the unknown bodies that had never been identified. 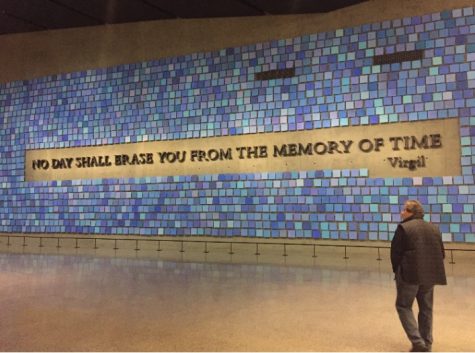 Within this room was another room set up as a little movie theater. It played messages from family members and friends and showed pictures of the person whom they had lost.

Cyndi played Steve’s for me. His wife spoke about what a great man he was: a great father, son and husband. There were pictures of him with his children.

As soon as I heard the voice of Steve’s wife begin over the speaker, I could no longer control my emotions. Tears streamed down my face and I felt nothing but pain. As a reporter, we aren’t supposed to let our emotions get the best of us and instead are supposed to empathize but keep our personal feelings out of it. But I couldn’t. Her voice was sad and full of emptiness. She made me feel lonely and lost, just like her.

“Why Steve? Why Brian?” I thought.