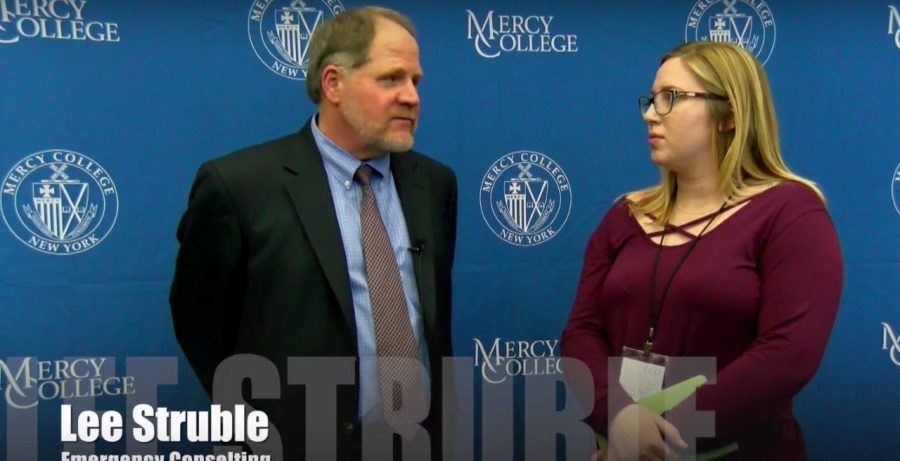 “I can’t believe we’re doing this,” a staff member mumbled. “Who thought it would get to a point where I would have to learn how to defend my kids from a shooter?”

Anxious whispers filled Mercy College’s Rotunda while the students and staff waited for the presentation to begin. Lee Struble, an emergency consultant and president of WSM Trainers and Consultants, stood in front of the Mercy community to discuss active shooter and threat training on Feb. 28.

“Each new event that occurs defines us, challenges us, and provides us with a new opportunity to educate,” described Struble.

It is time to adapt the ‘Run, Hide, Fight’ model that is traditionally taught when discussing an active shooter threat, according to Struble.

“We need to take lessons [learned from other incidents] and apply them to that method,” he added.

In the event of an active shooter threat, everyone’s number one priority is to get out and find somewhere safe.

“You’re responsible for your own safety, and then once you’re ready, you help others,” Struble said. “Make sure to use your instincts.”

One of the several scenarios that Struble reviewed was an event in which someone is trapped in the same vicinity with the shooter, and while there’s no definite answer, he provided some possible outcomes.

Some of his suggestions included staying still to give the appearance that you are dead, running for the exit in a zigzagging pattern to confuse the shooter, or even attacking the shooter.

He highlighted that an individual who is faced with an active shooter threat or emergency situation may experience hyperventilation, an accelerated heart rate, loss of peripheral vision, and diminished hearing.

“You need to imagine the unimaginable,” he mentioned. “Because that’s where we’re at.” 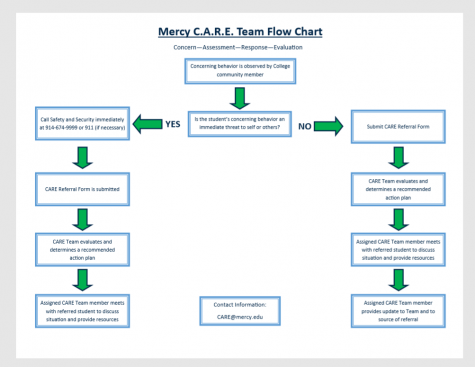 He touched upon various incidents that have happened across the country, including the incidents at Columbine High School in Colorado in 1999 and at Sandy Hook Elementary School in Connecticut in 2012.

Struble also talked about one of the most recent incidents, the shooting at Parkland. He described how the shooter pulled the fire alarm to get the faculty and staff to evacuate the classrooms.

“That fire alarm was a drill we were taught, but we weren’t taught what to do if it was a trap,” said Struble.

He emphasized the concept of “reverse evacuation” where individuals are trained to see danger, instead of putting themselves in a situation where they run into the threat.

Jane King, a Mercy College PACT Mentor, attended the seminar to educate herself, but also to learn about what kind of steps Mercy is taking towards a safer campus.

“In light of Parkland, I want to be prepared for the reality of this,” said King. “At this point, sometimes I feel that it’s not if it will happen, but when.”

“Everyone knows that quote, ‘One small step for man, one giant leap for mankind,’ but no one knows the entire quote,” Struble explained.

One of Struble’s priorities, besides educating the college community, is creating an emergency plan for Mercy College which will include threat assessment, routine drills, and instilling an immediate notification system.

“It is important to interact with your students,” Struble expressed. “Get to know them and talk about their home life.”

He emphasized that the decline in student and professor relationships is the first thing that needs to change regarding the threat assessment. And while there is no profile of an active shooter, there are signs that both students and faculty should be aware of.

Sudden behavioral and physical changes, such as a student withdrawing from activities or drastically changing their wardrobe overnight, are key signs that a student may be a threat to themselves or others.

“School shootings are rarely impulsive,” Struble emphasized. “If you see something, say something, but also do something.”

Some personality traits and behaviors mentioned by Struble, that may lead to violence include, but are not limited to, a low tolerance for frustration, poor coping skills, and failed love relationships.

“All of these active shooters do have in common the facts that they plan, somebody always knows about the situation, and they never stop until they are stopped,” he said.

Any suspicious student or activity can be reported to the Mercy CARE (Concern-Assessment-Response-Evaluation) where the threat will be thoroughly examined.

“Lockdown drills stop in college. Why?” Struble asked the crowd.

Lockdown drills are means of practicing preparedness in the event that there is a threat or an intruder, and is something that is practiced in K-12 educational settings and rarely seen in higher education facilities.

“It takes about three or four years to change a campus’ culture,” Struble mentioned. “People don’t buy fire systems and hope there’s a fire, but we still need to prepare for them.”

A key part to being prepared for an active threat is making sure that everyone knows where to go and what to do. Typically, in the event of an emergency, students look at their teachers and professors for guidance.

Participating in lockdown drills is a sufficient way to get everyone involved in the emergency plan.

“Students tend to find out on social media that there’s an event going on before they are notified from the school. And that is something we need to change,” said Struble.

Mercy will be updating their immediate notification system, Mercy Alert, to create clear communication during emergencies as a crucial part of Struble’s plan.