What Can Be Done?

In the wake of the school shooting in Parkland that left 17 people dead and another 17 injured, the conversation has since been focused on all that can be done in order to prevent similar incidents from happening in the future. But when will the conversation stop and the action begin?

The New Yorkers Against Gun Violence association has begun the trek in the right direction by taking the problem to the streets. On March 24, the NYAGV partnered with the March for Our Lives movement and called upon the citizens throughout New York to use their voices to force the change that they wish to see.

Since 1993, NYAGV has been vocal in the constant uphill battle for gun safety and gun safety legislation and was partially responsible for the passage of the New York Safe Act in 2013.

While the act was met with opposition almost instantly, its intent has stayed true and improved the state of New York for the better.

“NYAGV remains at the forefront of not only defending the law, but also seeking to strengthen it. New York is now ranked third in the nation in gun safety and it is because of those strong gun laws,” Paul May, Board President of the NYAGV, explained. 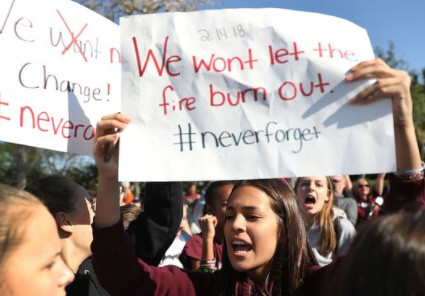 The work of activism groups such as the NYAGV has not gone unnoticed but there is also more to be done, they say. The state of New York is famous for its toughness on gun laws and safety, however that does not stop citizens from other states with weaker gun laws from trafficking weapons in.

May offered one of many solutions to this crisis.

“We should not be forced to allow citizens of other states to bring their concealed weapons into NYS if they cannot or do not meet New York’s standards. This would reduce our handgun laws to the lowest common denominator of other states’ laws.”

Following each of the tragic mass shootings at Columbine, Sandy Hook and Stoneman Douglas High School in Parkland, the NYAGV was forced to reassess their efforts and approach the problem from a different angle. Instead of focusing solely on the mental health and motive of the shooter, they turned to their local government representatives in hopes that the rising number of mass shootings in the United States would motivate them to place stricter sanctions on guns overall. While school shootings are constantly at the forefront of hearts and minds, activists state there is a bigger picture that needs to be considered as well.

On average, 93 Americans die every day at the hands of gun violence, including eight children under the age of 19.

Organizations such as the NRA and other gun rights activists usually point the finger at the mentally ill for being the reason behind mass shootings while critics disagree. If mentally ill parties are involved, they are then times more likely to be the targets of the mass shootings instead of the 4 percent of occurrences where mental health is a major component of the motive.

“The problem is easy access to guns by too many who should never have such access, and until Congress determines to do something significant to address the issue, gun deaths will continue to rise,” May said frankly.

In addition to this, there have been debates about the interpretation of the 2nd Amendment from the founding of the United States until 2008. In 2008, during the case of Washington D.C. v. Heller, the Supreme Court ruled that individuals are legally permitted to own guns. However, the Court also ruled the right was not an unlimited right, that local and state governments had the right to make reasonable laws as well. Because of this ruling, other federal courts were able to uphold state laws such as the NY Safe Act in New York as well as laws in other states such as Connecticut and Maryland.

Students from Stoneman Douglas High School have started a wave of activism that expands far beyond the 31,507 people who reside in Parkland. There have been marches, school walkouts, and constant outpouring of support as the words “Never Again” are chanted over and over again. Students around the country are encouraged to get involved in their local organizations such as NYAGV in the fight for gun control.

In the 2016 Presidential election, only about 40 percent of those under the age of 25 who were registered to vote actually cast ballots, and a much larger percentage of eligible young people did not register to vote.

But starting with the Stoneman Douglas High School students, this may soon change.

“This generation wields the power to change the culture of mass shootings and other gun deaths that victimize them by demanding action, and giving elected officials a reason to finally stop bowing to the gun lobby and instead respond to their constituents who demand sensible gun policies. These young people are determined to succeed and will vote out anyone who stands in their way,” May wrote in a press release.

May lent his opinion about the state of the country currently, saying, “Sometimes it may be hard to believe, but we are a participatory democracy – and we have to stand up and speak out for what we want and what we expect our government to do for us. And the most fundamental obligation of the government is to protect its citizens.