On COVID-19, Leadership, and the Economy

More than 40,000 Americans were in the hospital with COVID-19 on the night of the final debate, including record numbers in Tennessee, where the debate was held. Between the first and final debates, 16,000 Americans died from COVID-19.

Each candidate was asked what their plans are for maintaining the trust of the American people while leading the country through the unpredictable conditions of the pandemic.

Their vastly different viewpoints spanned from the virus itself and who is to blame for it, to the ongoing lockdowns, vaccinations, and what plans are in place to continue economic recovery.

Trump spoke about the fact that the virus was expected to cause 2.2 million deaths in the United States alone. 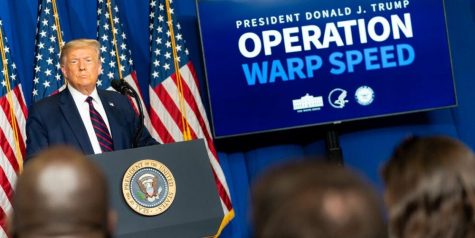 He proclaimed that Operation Warp Speed has a COVID-19 vaccine in the works. He plans for 100 million vials to be released and distributed by the military before the year concludes. In addition, the efficient production and distribution of personal protective equipment and ventilators throughout the beginning stages of the pandemic has further strengthened his confidence that the end is in sight.

Trump stands firmly on the grounds that he has built the strongest economy in American history. Now, as the country is being reformed to where he’d brought it before the pandemic, a record number of people have already returned to work: 11.4 million in a short period of time.

People of all different ethnicities, employment statuses, and political views expressed their desire to unify under Trump’s leadership. It was COVID-19 that halted this breakthrough, and he believes the progression will continue once the pandemic subsides. He wants to reopen the country entirely in order to return it to its successful functioning state, while continuing to follow social distancing and mask-wearing mandates.

The lockdowns had a major psychological effect on the American people with rises in drug abuse, depression, and skyrocketing divorce rates. Trump believes that Biden’s stance on continuing lockdowns in states with high numbers of COVID-19 cases is further hurting not only mental health but the economic recovery of the country as well.

Biden expressed his fear of the virus overstaying its welcome far longer than Trump expects. He exclaimed that the country can not entirely open back up until the virus is dealt with. He then proceeded to focus on his thoughts on Trump’s handling of the crisis thus far.

He believes Trump has no intention of increasing the health and safety of people in America, and that he has neglected giving schools proper equipment to reopen, forcing them to shut back down.

He also feels that there has been a lack of funding for small businesses, causing many to close their doors for good. He wants the country to open slower because he believes it is the safer alternative.

According to Biden, Trump was aware of the severity of COVID-19 in February of 2020 and chose not to take immediate action because he worried the American people would panic.

“You don’t panic. He panicked.”

Biden plans to invest in rapid testing, enforce constant mask-wearing, and set up national standards for opening schools and businesses safely – and aid them financially to do so.

His prediction entails the country facing a “dark winter.”

According to the CDC, before the new coronavirus strain appeared in China, it had never been seen before. It quickly traveled across the globe and gained the attention of scientists and world health organizations. All the while, Biden placed the blame on Trump.

“Anyone who is responsible for that many deaths should not remain as President of the United States of America.”